"It really chaps my ass that it’s someone in my profession, which is fighting tooth and nail for first amendment protections, that’s trying to erode them."

This quote from Tom Chandler's comments under the entry pretty much sums up the stupidity of of this mess lawsuit, which unfortunately is getting more common in our oversensitive culture.   In essence, Tom wrote a short piece on a SF Chronicle outdoor writer and his marijuana arrest back in 2010, that pretty much summed up what many west coast newspapers had already reported.  The writer is suing Tom for libel.  Seriously, even the SF Chronicle wrote about it.............

Read the latest on this adventure in 21st Century law here:  Lawsuit Post

I guess I should sue the hook manufacturer when I get a dull hook straight out of the package..........
Posted by Matt Grobert at 2:22 PM No comments:

It's terrestrial time in the Northeast and here is a great, high riding foam cricket pattern tied by Tim Flagler.  It's a very effective fly you can fish alone or as the top half of a "hopper dropper" rig.  The trout are looking up for these critters as well as ants, beetles and hopper, and this pattern in different sizes will imitate a couple of those bugs quite well.

Sharpen your hooks.
Posted by Matt Grobert at 4:26 PM No comments:

I'm still catching up from the trip, so here's another photo I took one evening while on the Henry's Fork. The fly is an Epeorus comparadun.  I'll post a report this weekend when hopefully things slow down some.  If you're bored, you can always page down and read the comments under my recent Stream Restoration Project post.  Feel free to add to the discussion, just keep it civil, please.

(Click to enlarge)
"Last year I went fishing with Salvador Dali. He was using a dotted line. He caught every other fish."  Steven Wright
Sharpen your hooks!﻿
﻿
Posted by Matt Grobert at 7:30 AM No comments:

Montana TU has sent out a timely reminder about a possible serious mining-related impact on Sheep Creek, a critical spawning trib of Montana’s beloved Smith River, which happens to be home to some of the best riverside shitters in the civilized world.

From our friends at Chi Wulff, read about it HERE and be sure to send your comments the MT DEQ.

Yep, the bears use them, too. 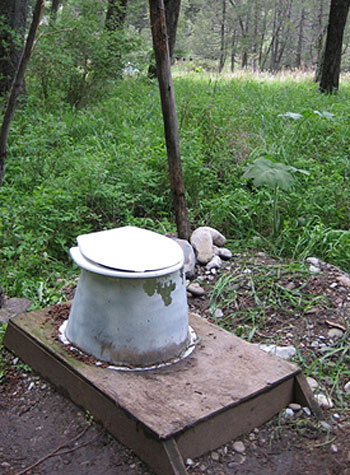 Posted by Matt Grobert at 2:09 PM No comments:

Last summer the Raritan Inn section of the South Branch of the Raritan River, approximately 7/10 of a mile of trout stream, was restored by Joe Urbani of Urbani Fisheries, LLC.  The project was quite an undertaking, five years in the making, but now a year later it appears to have been a great success.  The restoration work was filmed by Tim Flagler of Tightline Productions, and he just released this great video of the project complete with a detailed narrative of entire process.

Sunset on the Henry's Fork

Posted by Matt Grobert at 11:29 PM No comments:

Some Flies for Idaho and Montana

This Wednesday morning, I'm flying out to Idaho with my friend Bruce to fish the Henry's Fork, Madison River and a couple of other smaller streams in mountains. We will be staying at the Trouthunter Lodge on the banks of the Henry's Fork, where his son JB works in the fly shop.  Check out JB's main passion here: LINK  The last few weeks I've been tying flies for the trip, and thought I would share a few of the patterns with you here.

These are Lawson's Honey Ants.  They appear mid August and the trout love 'em.  JB says they are a hot pattern right now on the rivers.   Trout candy...........

(Click on photos to enlarge)
Here's a Callibaetis spinner tied with deer hair wings.  Sparse, but very effective when those big Henry's Fork rainbows are casually sipping the naturals off the smooth surface of its waters.

These are spent partridge caddis.  I tie them with a touch-dubbed thorax instead of hackle, and they work like a charm.  Simple to tie; dubbed fur abdomen, zelon underwing, partridge body feathers (2) for the wing, and a hare's ear touch-dubbed thorax.  They float like a cork and the trout like the lazy drift they impart as they sit down low in the film - in trout speak they shout, "Easy friggin' meal!"

And here's a poor photo of a great fly and one I'll use often, the Iris Caddis.  When the Hydropsyche are hatching in the evening, this is the only fly you need to take those aggressively feeding fish.  I know, it looks like a dust bunny on steroids, but it takes fish like the government takes your hard earned cash.

Here's another mug shot of the Irish Cabbage.

We'll try to post some kind of report while we're there, but don't get too excited because I just may slack off and wait until I get back to the homestead.   Time will tell.

Here's a great piece from Andrew Bennett on the Deneki Outdoors blog with some of the best, straightforward advice I've read in a long time.  He boils it down and hits on all the important stuff the best anglers do every time they fish.  I particularly like #2.  : )
Click here for the entire article: 13 Habits of Highly Effective Anglers

Sharpen those hooks!
Posted by Matt Grobert at 6:30 AM 2 comments:

Kadie Walsh and her husband, Dake Schmidt, 43, tied the knot Saturday while knee-deep in the middle of Alaska's Buskin River, with water temperatures only reaching about 40 degrees.

Photo - Heidi Stutes
Is this what they mean when they say the "catch of a lifetime"?
Read about the event here: LINK
Posted by Matt Grobert at 8:00 AM No comments:

This is Frustrating ...... and Awesome

We fished a few times this week. Nothing crazy, just a couple of evening trips to the South Branch; wet wading, fish rising near dusk and several landed. Lots of mosquitoes on the attack the second you leave the water and step on terra firma.   The river is in great condition for August, but the trout are very sensitive with the lower flows - a bad cast or too much wading/movement will put them down in an instant.  Lots of midges, Stenonemas, Isonychias, small Sulphurs and various caddis appear nightly shortly before the sun goes to sleep.  Early mornings have been good with decent Trico hatches.  Ants will bring the trout to the surface any time of day, if they're interested in feeding, you just have to be there at the right time.  Heard that before......

Royal Wulff....because they work and I can see them at dusk.

Long leaders, fine tippets and a very stealthy approach will get you hook ups.  Wade a little as possible, and when you get into position plant your feet, crouch low and avoid random casting.  Carry a thermometer and use it - if the water temp is over 68, give the fish a break and find something else to do.

Sharpen your hooks!
Posted by Matt Grobert at 12:59 AM No comments: