Yesterday, Vinnie and I decided to fish the Musconetcong River, one of New Jersey's most popular trout streams.  The "Musky", as it is known, begins at Lake Hopatcong and flows in a Southwesterly direction for 45+ miles before it enters the Delaware River.  We fished a stretch that flows through a wide valley that is a patchwork of cornfields and former dairy farms and whose weathered barns have either been converted to homes or left to nature's whims.  The river here is classic Northeastern trout water; long pools divided by short, fast pocket water stretches, that hold plenty trout (mostly stocked) and the aquatic insects they feed on.  This stretch is also perfect habitat for scuds, which thrive and serve as a primary food source for the trout. 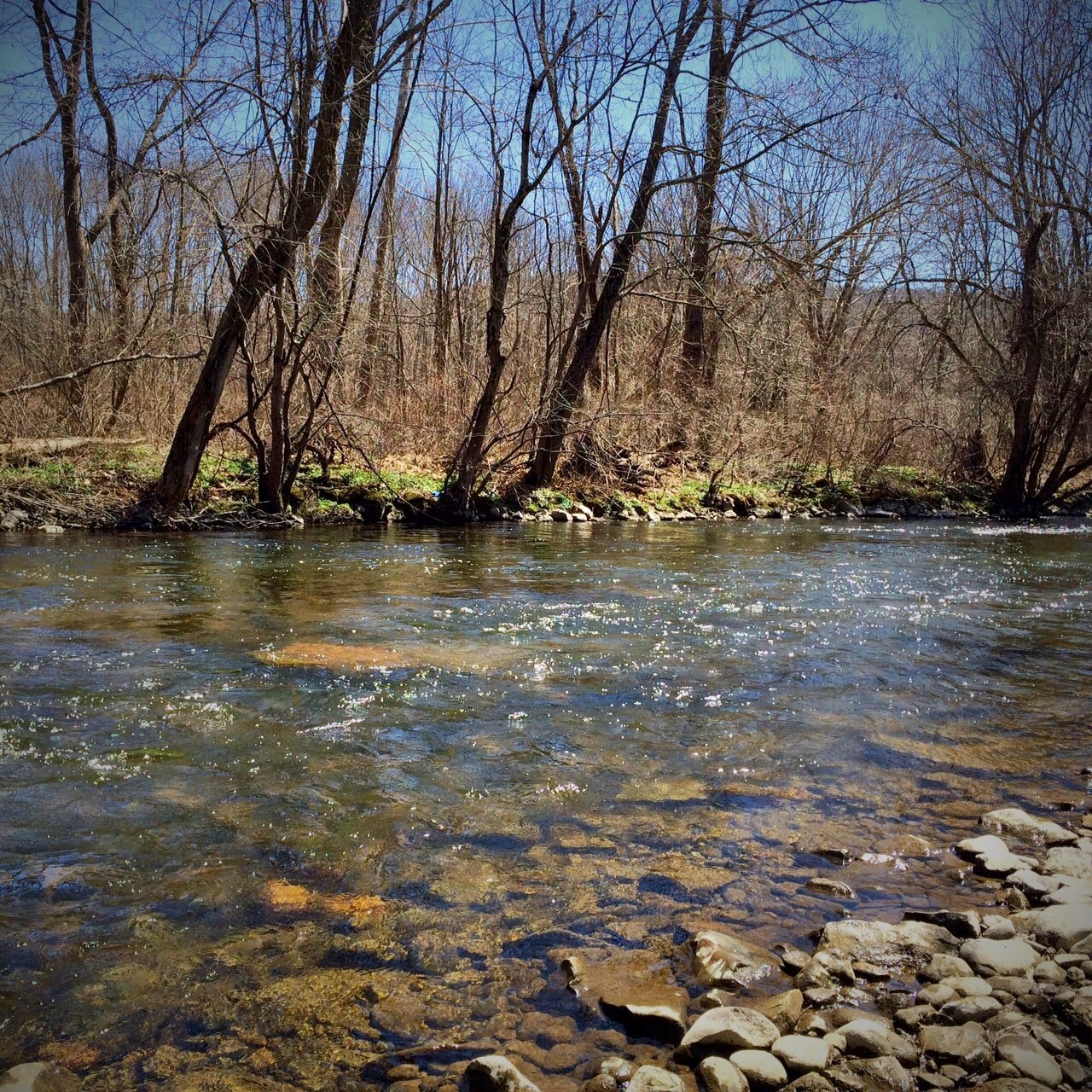 Let's get to the report.  We parked off a road that crosses the river and walked about a mile up through first a cornfield and then a good half mile of shrubbery, trees and thorn bushes before we got to the water we wanted to fish.  The river was a little high, clear, and there was a good hatch of dark grannom caddis and little black stoneflies.  The skies were clear and bluebird blue, the sun was as warm and bright as it has been all year.  A light, intermittent breeze blew just often enough to keep casting interesting, but not so much that I resorted to swearing at it under my breath.  I was fishing a 10 foot, 3 weight, which on windy days stays in its case, but the purpose perfectly today.

Vinnie was in the water and fishing before I was, and had taken a few fish by the time I started.  I started fishing the pool above him, and using a brown and yellow LaFontaine sparkle pupa, it wasn't long before I hooked into a fish and landed it.  As I released the fish, Vincent hooked one, lost it, and in a few more casts was into another.  I also couldn't keep the fish off my fly once I got the right amount of weight on my leader.  I had heard the state stocked the river heavily this year with rainbows, and I guess conditions were just right so that they were feeding aggressively.

It is rare, but sometimes the water, weather and perhaps some other natural event happens that the trout feed with abandon.  It was like we couldn't keep them off our flies.  No kidding, as we worked the water we were hooking fish with a regularity that was almost silly. I'm sure we had many more drifts that went unmolested, but the ratio of drifts to takes was high enough that it seemed as though we were into fish almost constantly.

We started to work upstream, and after going maybe two pools, I changed directions while Vinnie continued moving up.  I wanted to fish, not rub elbows with other folks, and about 100 yards upstream there were at least 7 guys fishing a few pools. I headed down and continued to hook fish regularly, and after about an hour Vinnie was back and had the same experience as he worked up, although he had to hopscotch around the other anglers.   My biggest fish was this hold over brown that took my fly less than a foot from the opposite bank.  I had seen it flash a few times as it took emergers under the surface, and after making a few casts, I got the drift right and it took the fly. 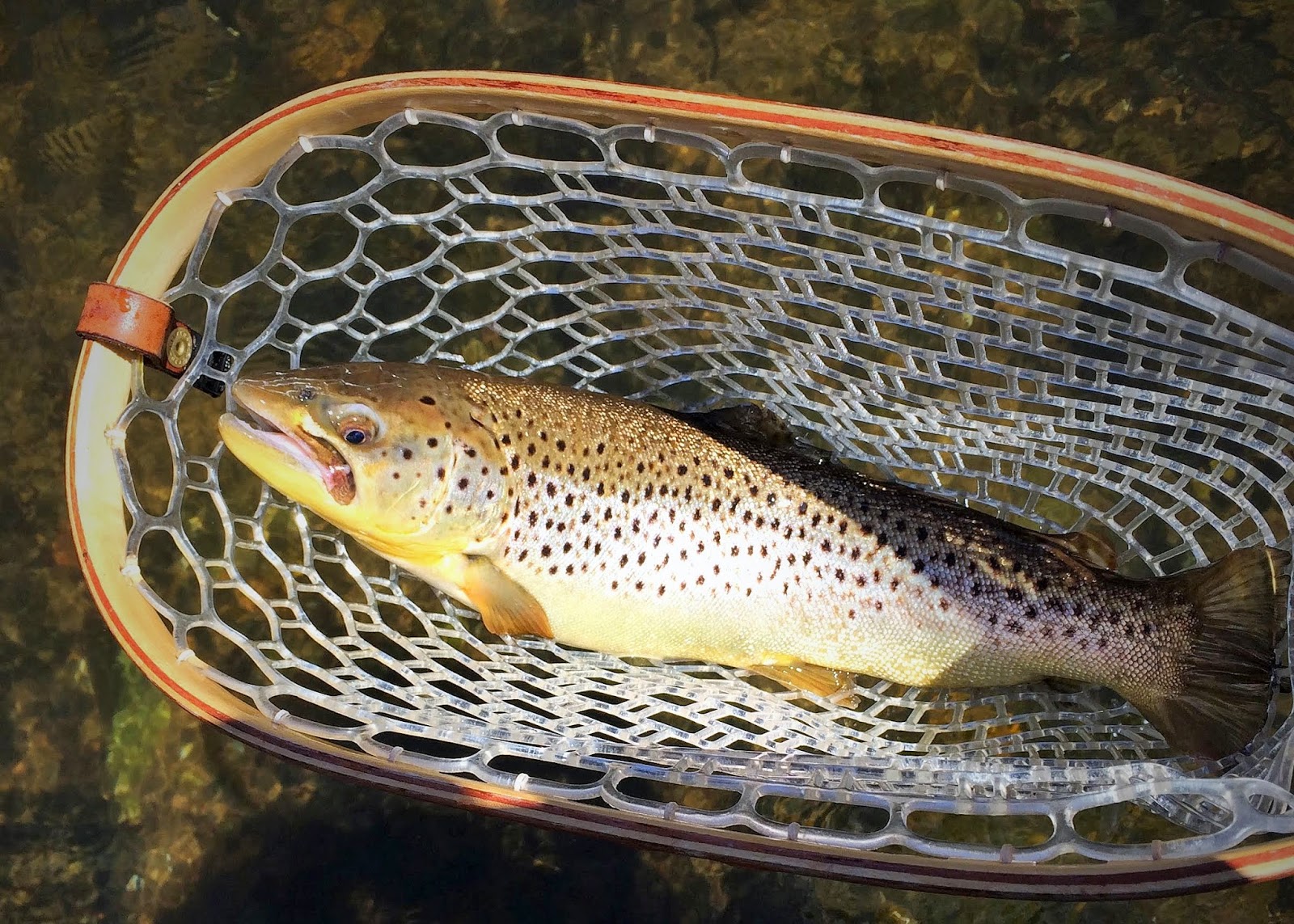 It was a great day, however unusual, as we hooked and landed a ridiculous number of fish and after three hours we figured we would quit while we ahead.  Most of the fish were taken on the sparkle emerger.  In the deeper holes, a size 12 Walt's Worm was the ticket.  With all that activity, we didn't see any fish rise, which isn't a surprise but more of a wish.  When conditions are like they were, the voice my head always starts whispering, "Look for rises.  They just have to start looking up."  No such luck, and no I'm not crazy, just optimistic after a long, cold winter of not fishing. 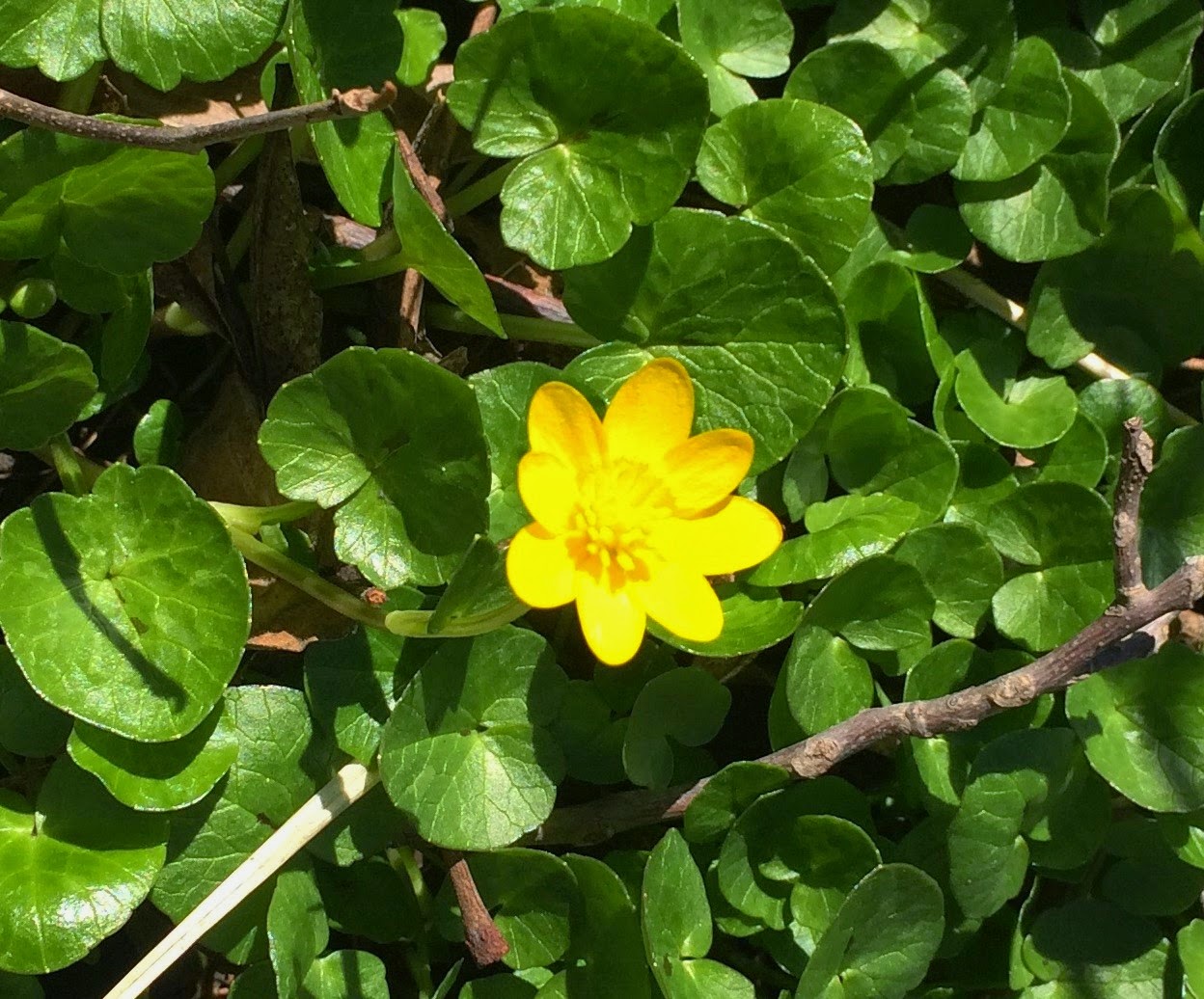 Sharpen your hooks!
Posted by Matt Grobert at 8:55 PM

Nice story! Black Stones? I didn't see. Usually in mid March. Would like to have seen photo of Black stone fly, Walts worm, and your caddis imitation! Thanks