Recently, Tim received a pink dry fly hackle cape from Whiting, so in honor of Breast Cancer Awarenesss month we decided to tie a classic Catskill split hackle wing dry fly.  For reference, the methods shown here are those that would be used to tie an Adams.  I should note that I only used one wrap to split the wings here because the thread I was using was fairly heavy (to me). Normally, I would use 6/0 Danville thread, which tends to require a couple of criss-cross wraps through the base of the wings to get the right posture.  The thickness of the hackle stems will also dictate how many wraps that are necessary; it's a feel thing that you will develop as you tie them. Just remember to use as few wraps as necessary to get the wings where you want them.

And speaking of Breast Cancer Awareness month, the New Jersey Chapter of Trout Unlimited held their annual One Fly contest and as luck would have it, it was won by Sue Reed, who was representing Casting for Recovery.  Casting for Recovery is a wonderful organization whose mission is to enhance the quality of life for women with breast cancer through a unique program that combines breast cancer education and peer support with the therapeutic sport of fly fishing.

And if you are wondering what mayfly this pattern imitates, it's a Mammarella curata.

Sharpen your hooks!
Posted by Matt Grobert at 8:30 AM 8 comments:

A Beautiful Day On the Water 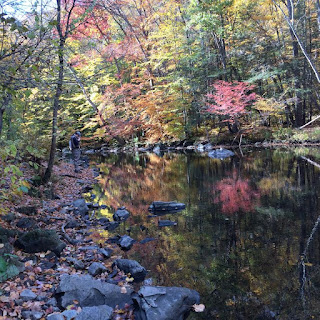 (Click on photo to enlarge)
After the morning showers ended today, the sun traded places with the clouds and warmed things up enough to make for a very pleasant day on the river.  Air temperatures reached the mid-sixties and a gentle breeze pulled the autumn leaves from the trees and placed far too many of them on the water surface for my liking.  Trout rose consistently in the low clear currents to minutiae only they could see.  It was a beautiful day for fishing, not catching, made even better because my son Matt fished along with me.  That's him in the photo above blending in with the beauty around him as he tied on his fly.

We fished for the better part of the afternoon and had many refusals and even missed a few takes. The trout seemed to get plenty of exercise between rising up to eat naturals, and also to inspect our offerings, sometimes even nudging the fly with their nose before easing their way back down to the bottom.  I scanned the surface over and over and didn't see a thing on the water (except leaves).  We also didn't see any insects in the air but for a lone caddis.  It was one of those days where the fishing was very good, but the catching left us scratching our heads.  About 4:30 we called it a day, went to the local Italian joint, and enjoyed a couple of beers, some wings and watched football.
-------
What a difference a day  makes.  Yesterday it was chilly, raw and cloudy.  I fished for about two hours late in the day, saw lots of bugs, and caught a bunch of fish on a small Walt's Worm fished on a long, light leader without any split shot.  With the very low water, that's about the only way to fish a subsurface fly without getting hung up on the bottom.  I cast the fly across and slightly upstream with a mend and then follow my line with the rod tip watching for any twitches or sudden movement in the line or leader.  A simple, quick line strip to pull the line tight is all it takes to set the hook.  Here's the fly I caught all of my fish on yesterday. 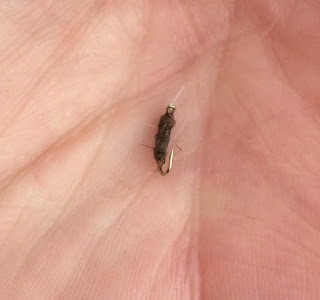 It was great to get out and fish again, and just as good to be here writing about it.  Matt and I plan to fish next weekend and hopefully we'll have better results than we did today.  He certainly works hard at it and is due for a multiple fish day.  I'm looking forward to it.

Sharpen your hooks!
Posted by Matt Grobert at 10:28 PM 1 comment: 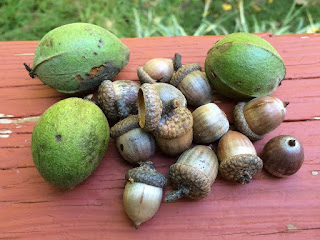 The squirrels and other nut eating animals must be very happy this year as the bounty of acorns, hickory nuts, walnuts and chestnuts is about as great as I have seen in many years.  If you read the Farmer's Almanac, it will tell you that this is a harbinger of a severe winter, as the thinking goes that nature anticipates the future - trees bear more fruit, animals have thicker fur, pigs gathering sticks, the height of the hornets nests, the narrow width of the red band on a woolly worm, etc.

Some scientists, however, tell a different story.  In fact, some science folk claim a bountiful season of tree nuts is a hind cast, not a forecast. Acorn production for white oaks takes about two years from bud to acorn, and three years for red and black oaks.  In other words, this years bounty is the result of long, wet growing seasons two and three years ago depending on the species of oak.

I like to think they both hold true, although I would prefer I milder winter this year after the last two. Only time will tell.  Look for an update next spring.

Yes, I'll remember, especially if I'm cursing the acorns after a harsh winter.

Sharpen your hooks and don't slip on the nuts.
Posted by Matt Grobert at 9:29 PM No comments: 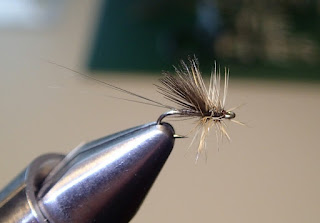 Here's a nice step-by-step from across the pond of how to tie a badger dun dry from the Small Fly Funk blog - Andy Baird.  LINK: #22 Badger Dun SBS

If you are not familiar with Andy's blog, you should check it out as he regularly posts some great tying tutorials of diminutive dry flies.

Sharpen your hooks.
Posted by Matt Grobert at 1:01 PM No comments:

Being a believer in the keep it simple stupid mode of tying, and fishing for that matter, these types of patterns are some of the most effective out there when fished properly.  This style lends itself to both topwater patterns, and to subsurface patterns.   In fact, one of the things I like so much about the RS2 is that it can be fished deep, and at times in the surface film as a small BWO or midge emerger.  A friend, Bill Silvia, ties essentially the same pattern you see Tim Flagler tie here but with a tuft of pearlescent ice dub for the wing bud, and does very well on the South Branch and other rivers with this simple pattern.


Tie some up and sharpen your hooks!
Posted by Matt Grobert at 1:02 PM No comments: