I finally had time recently to tie Craig Mathew's great mayfly pattern in front of Tim Flagler's camera.  I've written about this pattern many times over the last few years for good reason; it works very well when trout are feeding on olives.  It's fairly easy to tie with only three materials that are readily available.

Sharpen your hook.
Posted by Matt Grobert at 7:00 AM 3 comments:

Friday Featured Fly Tyer - 11:30 AM - Tying Simple Dry Flies for Trout  I'll be demonstrating how I tie a bunch of simple and effective dry flies.  These flies require only two or three materials to create and fairly straightforward tying techniques.

For all the details, click here: The Fly Fishing Show Edison, NJ

Hope to see you there.
Posted by Matt Grobert at 8:19 PM 2 comments:

We managed to get out yesterday and fish the South Branch of the Raritan River for the first time in 2018.  Up until last weekend when we had high water from heavy rains, the river was encased in ice and pretty much unfishable.  When I got to the water yesterday in the early afternoon, the air temperature was nearly 50 degrees F and the low winter sun fought its way through high thin clouds casting its dull winter light across the land. The water was a mere 36 degrees F. 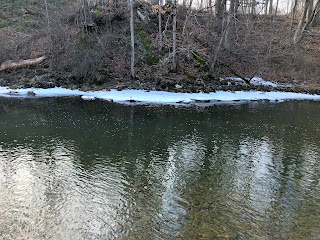 When the conditions are such as they were yesterday, I keep it real simple.  I tied a size #6 beadhead krystal bugger to the 4X tippet I first added to the 9-foot leader.  I cast the fly across the river leaving it just short of the bank (or the ice) and then brought it back in short, quick strips.  After missing several short strikes, I hooked and landed a nice 14-15 inch brown that was in my net only for the few seconds it takes to back a barbless hook out and then dip fish back into the current to swim away.  I also took a 10 inch rainbow that fought like it was twice its size, and then called it day as my feet were protesting the cold water relentlessly.

Sharpen your hooks.
Posted by Matt Grobert at 11:16 PM 2 comments:

Tying the WD-40 Plus

The WD-40 is a midge imitation that has stood the test of time.  The pattern has been around for decades and produces well anywhere that trout are found.  In this video, Tim takes the pattern one step further by adding a short wing bud of CDC protruding through the wing case.  It's an easy fly to tie and you can change the color simply by changing the thread you use and matching the dubbing to it.


Tie some up and sharpen your hooks!
Posted by Matt Grobert at 7:30 AM 3 comments:

We spent another weekend doing lots of fly fishing related stuff but no fly fishing.  Our rivers were first frozen solid and then Friday it warmed into the 60's and rained like hell.  It took a full day for the rains to move the ice out, but by Saturday morning the rush of water cleared out the inches thick ice and filled the rivers bank to bank and then some.  So Saturday I went over to Tim Flagler's and tied for a video whose subject pattern has been long in coming.  While there we also covered lots of ground ranging from fly tying to fly fishing to equipment to the Denver Fly Fishing Show.

After tying for the video and hanging out with Tim, I headed down to check out the South Branch.  It was a far cry from where it was the last couple of weekends.  Below is a photo I took about two weeks ago, and below that is one I took Saturday from the same exact location (sort of - I couldn't stand where I had the time before as it was under 2 feet of water).  To see how much the river had come up, check out the two snow covered big boulders in front of the trees in the first photo on the left side of the river a little more than half way up.   In the second photo you'll note that they are water bound.  Its all good; winter spates are nature's way of cleaning house on the rivers. 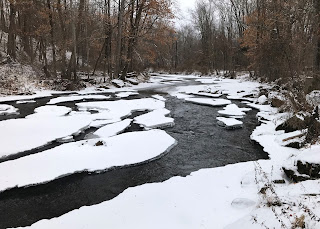 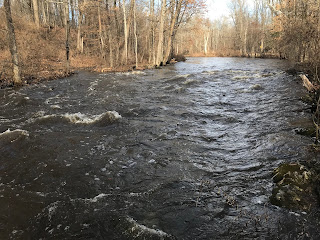 On Sunday morning we taught the free fly tying class at Shannon's Fly and Tackle Shop and had a good turnout despite the frigid cold that made its way back in after the rains - it was 13 degrees F.  We tied a simple scud, Galloup's Improved Baetis nymph, Improved BWO Sparkle Dun, and a Pumpkinhead Midge.  It was a great time with some of the usual folks, and a few new tyers to the class that really turned out well tied flies.  This Sunday our friend John Collins will be teaching the class and I believe demonstrating how to tie his sculpin patterns

Today was back to work - you don't want to hear about that so I'll sign off.

Sharpen your hooks!
Posted by Matt Grobert at 9:02 PM No comments:

For those of you in the area, I'll be doing the free fly tying class this Sunday morning at 9:30AM, at Shannon's Fly & Tackle in Califon, NJ.  Bring your vise and tools and tying thread (6/0 Olive Danville is preferred, but black will do).  I'll be tying a few winter trout patterns for our local rivers - usually we get in 3, sometimes 4 patterns. 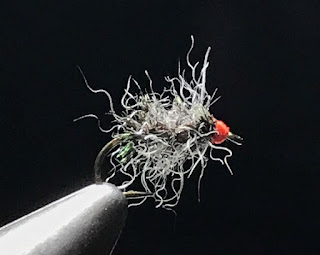 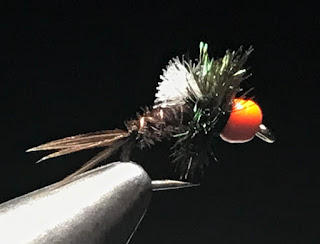 Here's another great video by Tightline Productions - Tim Flagler - of our friend John Collins tying his Electric Caddis larva. In this case, John is tying a Rockworm larva - genus Rhyacophila, which are present throughout the year in Eastern rivers and streams.  By just changing the wire and tubing color, you can imitate any caddis larva you wish.  I can say from experience, these flies work.

Sharpen your hooks!
Posted by Matt Grobert at 10:58 PM 1 comment:

We finished 2017 by walking the South Branch of the Raritan from Hoffman's Crossing down through the gorge and back again.  We started 2018 by walking the river from Hoffman's up stream to the pond in Califon and back.  We didn't fish, it really wasn't an option, but I wanted to be on the river to enjoy its charms and think about the year past and the year to come.  Yesterday the temperature in the gorge was 8 degrees F, today it was a comparatively balmy 19 degrees F along River Road.  The pond in Califon is a skating rink with lots of kids enjoying the ice and fresh air. 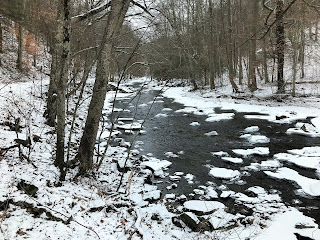 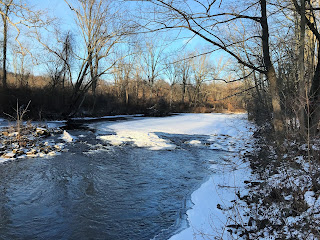 Wishing all of you a very Happy New Year!

Sharpen your hooks and get down to the river every chance you get even if its just to hear the water flowing over and around rocks and boulders.
Posted by Matt Grobert at 7:13 PM No comments: