This past Saturday I fished the South Branch of the Raritan River for a couple of hours in the afternoon and had a great time fishing dry flies.   The river was a little low and clear as gin, the air was maybe 50F with a bright sun moving in and out of the clouds passing overhead.  When I got there I was expecting ot see the black stoneflies on the water, but I wasn't expecting to see Hendricksons hatching so early in the season.  Not a ton, but enough that the trout were focused on eating them over the more adundant stoneflies.

Of course, I didn't notice the Hendricksons at first, as there were plenty of stonesflies in the air and on the water and so that's what I initially set out to imitate with a #14 dark gray caribou caddis.  I dropped the fly over rising trout only to have them ignore it time after time.  My presentations didn't put the fish down, I thought I was getting a good drift, but the trout were having none of it and kept rising like I wasn't even there.  So I stopped casting and got down low to reduce the glare coming off the water,  and looked across the surface and saw a mayfly.  I watched it drift along and sure enough a trout went out of its way to take it.  I watched some more and much to my surprise I saw more of what turned out to be hendricksons, mostly red quills (males) but also a few of the larger hendricksons (females).  So as not to disturb the good water, I waded downstream to a shallow run and stepped out into the current to grab one of the insects to positively identify it.  Yep, a red quill!  About 2 weeks earlier than we normally see them in this region of the Northeast. 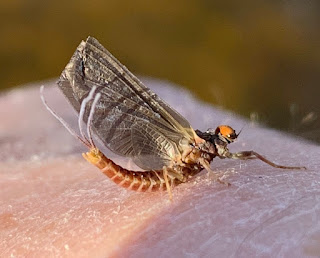 (Red Quill)
I did not expect this at all; 50 years of trout fishing in New Jersey and I had never seen hendricksons hatching this early in the year.  I have seen a random one here and there in late March over the years, but not enough to bring up fish.  I also saw a single quill gordon, large and looking much like the female hendrickson, but a lighter body and only two tails.  Hendricksons have three tails.

Once I got back to the run where fish were rising to the duns, I tied a size #12 Catskill hendrickson to the end of a new, 3 foot long, piece of 5X tippet.  I waited and watched until I saw a consistently rising fish and then with a quick cast I dropped my fly a couple of feet about the working fish.  The fly dragged before it got to the target so I picked it up and made another cast, this time a strong reach cast, and that did it.  The fly drifted right over the fish and it took it like candy.  I brief fight ensued before I netted a nice rainbow.

A number of fish were working the run I was fishing, and a few casts later I hooked and landed another rainbow.  The hatch pulsed as it usually does, with brief periods of flies coming off the water and fish taking them followed by a 5 to 10 minute period with few bugs and the fish presumably resting on the bottom waiting for another pulse.  I wound up taking a bunch of cookie cutter rainbows and a nice brown trout. 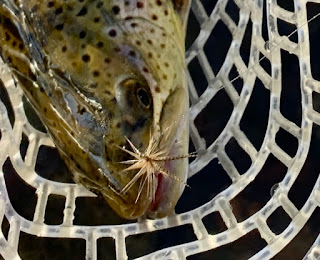 And here's the one fly that did the trick.  I took this one in the sun where it appears very light, but it isn't, as you can see in the second photo.  The hackle and tail is from a rusty dun neck from Sidlinghill Hackle and the body is a mix of tan, pink and gray rabbit fur.  When I have a good day with a fly, I cut if off and save it leaving some of the tippet so I have a momento from a good day on the water. 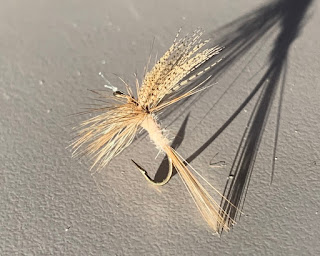 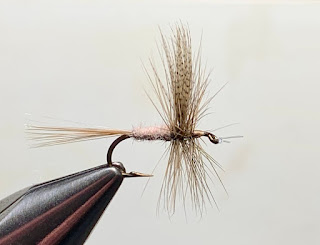 It looks like the hendrickson hatch is likely going to peak quite a bit early this year, perhaps before opening day in New Jersey.  So if you go out you will have to fish special regulation waters which there are only a limited amount of; don't expect to  be alone on the water.

Sharpen your hooks and give each other plenty of room on the water...it's just fishing.
Posted by Matt Grobert at 11:16 PM 8 comments:

Last weekend, 3/14 & 3/15, we managed to fish both days.  Saturday in Pennsylvania with a couple of friends, and that Sunday by myself on the South Branch of the Raritan River.

Both days were typical late winter early spring days; cool, breezy and a mix of bright sun and clouds.  The river on Saturday was crystal clear and slightly lower than normal.  Blue-winged olives hatched in pulses, and tiny midges danced in the air and in the leeward sides of rocks and trees.  Trout rose in  tempo with the insect activity, and after carefullt watching the rises it was apparent that some of the trout were taking the olives, and others were gently sipping in the tiny midges.  The olives were a size 18, and the midges were generously 1/8 inch in length with slender black bodies and clear wisps of wings. It always amazes me that these minute insects have all the parts necessary to create energy to move their legs and also their wings to fly.

As I usually do, I wandered off upstream from the others and found one of my favorite runs with rising fish and free of anglers.  As we had seen in the runs downstream, some of the fish rose to the olives, and others sipped in the midges leaving only a couple of subtle rings as evidence.  Took a few small wild browns on a size #20 simple snowshoe emerger before the rise tailed off and the sun went below the hills.

On that Sunday I fished close to home, and while the PA stream was a limestone creek, the South Branch is a freestone stream that has an abundance of stoneflies along with mayflies and caddisflies.  I got to the stream mid afternoon, and initially I didn't see many insects in the air or on the water.  So I started out throwing a black woolley bugger at the opposite bank and stripping it back through likely holding water.  I got a few chases and bumps but no hook ups.

Around four o'clock the sun had come out in full force and with that the little black stoneflies appeared.  The females skittered and dropped down to the water to lay their and the trout began to chase them on top.  The breeze helped out to by knocking the clumsy fliers onto the water surface where many struggled before being eaten.  I put on a #14 dark gray caribou caddis and using my 10' 3wt rod and a long leader of 10 feet, I skittered the fly where trout were taking the naturals.  I think it took two casts before I took a stocked holdover rainbow of about 12 inches. 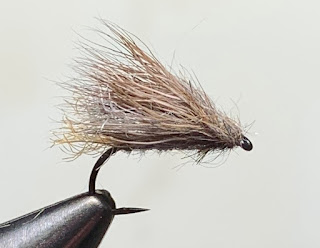 By the time I had to get off the water, I had caught a bunch of stocked rainbows, and one brown of about 10-11 inches, all on this one fly.

Sharpen your hooks and keep your distance.
Posted by Matt Grobert at 6:30 AM No comments:

The fly fishing show is this coming to Lancaster, PA this weekend - March 7 & 8 - at the Lancaster Marriott in Lancaster, PA.  I'll be there both days tying flies and doing presentations.  Show Hours are: Saturday 9:00am – 5:30pm and Sunday 9am – 4:30pm.

Hope to see you there.
Posted by Matt Grobert at 7:00 AM 1 comment: