Merry Christmas and Happy Holidays to Everyone!

Hope you all are enjoying this holiday season with your family and friends.  Here's a photo of my three children when they still believed in Santa Claus. 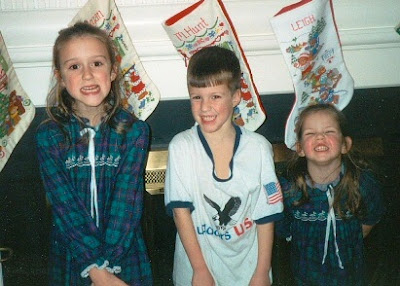 I'm looking forward to having this week off and the plan is to get some fishing in at least a few days.  Reports to follow.
Cheers!
Posted by Matt Grobert at 5:56 PM 1 comment:

One of the great things about the fly tying and fly fishing shows is that we get to see and meet some incredible fly tyers and people that we might not otherwise have.  Pat Cohen is one of them.  He is an incredible deer hair fly tyer/artist, who not only can tie the standard bass bugs very well, he also creates birds, fish and other wildlife out of dyed deer body hair and feathers using only thread and a steel hook.
Here is a Ruby-throated Hummingbird he recently tied for me to give to my bride.  Ain't that the tits!  Seriously, it's feathers and various colored deer body hair tied on a hook and clipped to shape. 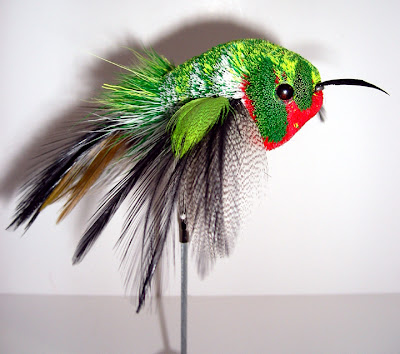 To view more of Pat's creations and for information on purchasing them, go to his blog: Super Fly
The Fly Fishing Shows are coming up soon, and Pat will be a several of them demonstrating his talents to anyone that wishes to watch and ask questions.  Stop by his tying table - just look for the guy with the colorful flies and a crowd.
Posted by Matt Grobert at 7:45 AM 2 comments:

We sat down this week with Tightline Productions and made this video on how to tie one of the most effective small flies we have ever fished - Rim Chung's RS2.  For many tyers, this is a difficult fly to tie, but with a little practice and attention to the details, it is worth the effort.
Posted by Matt Grobert at 9:11 AM 3 comments:

This week we bring you a great nymph pattern that my good friend and regular fishing partner, Vincent Caffarra, developed.  The Isonychia, or Slate Drake as it is commonly known, is very abundant in our Eastern freestone rivers and streams and this pattern mimics the natural well.  In the video, the fly looks somewhat light in color, but once it gets wet it looks like the real thing.  Again, thanks go to Tightline Productions - Tim and Joan Flagler - for another well-produced video.

The Struggles of Mankind

Mr. Q, the master chef and my agent at arms, went fishing yesterday as he usually does on Mondays.  He reports the fishing was tough.  It seems his "trout" would only take very small flies and ignore all else.  Even then, the catching was most difficult despite it being a warm December day.

So you may be wondering what its like to be a chef and a trout fisherman.  While I am speculating, I do watch the man while he fishes, and I see the frustration on his face.  He hooks and lands a nice trout, and while it hangs in his landing net the internal struggle begins......."Do I keep it?  Douse it in egg and then cover it in flour.  Lay it in a simmering bath of melted butter, diced onions and some minced garlic?  How good would that be with some rosemary roasted red potatoes and a tall glass of Guinness?"
He looks around to see if anyone is watching.  He looks at the hapless trout curled in his net, one eye seeing through his soul, and then thinks, "No, he must go back to fight another day."
"Maybe not, I haven't had fresh trout in ages."
Then he comes to his senses and realizes he is in the Gorge and must release his catch, or suffer the consequences of knowing he kept a fish where that is not permitted.....or maybe he just realized the trout is a pellet fed, hatchery version of the real thing that no matter how magical his cooking is, would still taste like wet cardboard.
He releases the fish to fight another day.
Nice job Mr. Q.
Posted by Matt Grobert at 7:42 AM 6 comments:

Who said it was going to be warm today?  It wasn't warm, but it wasn't real cold either, but the water sure was!  I spent the day fishing the South Branch of the Raritan with Lou DiGena, and we did pretty well considering the conditions and the fact that I froze my ass off.
The day was fairly bright, with the sun mostly tempered by high thin clouds.  It did break free of them every so often to warm the hands and face.  The air was in the upper 40's, and the river was somewhat high, clear as gin, and 42 degrees.  Yep, it was a day we needed thermal pants and dry feet, and Lou had them, and I did not.  I forgot my thermoply pants, and my right foot was mostly wet thanks to leaking waders.  Still, we fished a good 5 hours or so and had a good time bringing some nice fish to net.  We fished a very rocky section of the river, and the high water made it tough to wade, especially with my cold, stiff legs.  Almost took a swim more than once!
We caught all rainbows, some decent sized ones, and all of them fought hard.  I got mine on bead head Bird's Nest, LaFontaine Sparkle Emerger, and one on Walt's Worm.  Hooked a couple on the Pumpkin Head, but none came to net.  Lou was using a Czech nymph set-up with three flies, and the only one I can remember he got fish on was the Bomb.  It's big, gnarly gold bead caddis larva tied on a #8 scud hook - I guess Lou's trout wanted big and ugly today!  He got some photos and perhaps he'll post some on his blog - Fly and Fin - link on the right----->
Nothing like fly fishing for trout in December.....and catching fish!
Posted by Matt Grobert at 11:02 PM 1 comment: