Montana - My Buddy is Getting Married

A couple of weeks ago I spent a week in Montana with my son, Hunt, who is getting married in early September to a wonderful women who also fishes.  We rented a small cabin that sat on a high bank over the river near West Fork.  The location was ideal as we love fishing the section of river from Quake Lake to the Palisades and here we were right in the middle of the this stretch.  And at night we got to fall asleep to the sounds of the rushing river below the cabin.  The weather was consistent throughout the week with highs in the mid 80's during the day with late day thunderstorms followed by clearing the last few hours of daylight.  And the fishing was great; during the day we had pulses of hatching mayflies, fallen spinners and hatching caddis with the trout eager to take them off the top.  Midday, when top water action fizzled, we switched to subsurface flies like serendipities and pheasant tail nymphs and cintued to catch fish.  And late day into dusk, after heavy thunderstorms ripped through the valley chasing most anglers off the river for the balance of the day, was when the best dry fly action occurred. 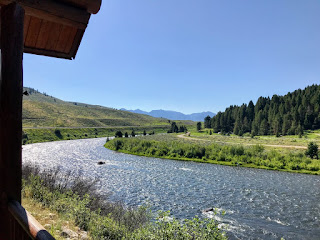 The view from the cabin.

We fished hard every day, 10 to 12 hours each, hitting different spots on different days.  Having fished the river for several decades, it wasn't too hard to find locations that were free of other anglers. On Wednesday we floated a 6-mile section with Tom Cornell of Blue Ribbon Flies and hooked a ton of fish, landing about 30 raindbows and browns or so between us, all on dry flies.  We fished two-flies, a missing link caddis or an ant pattern with a spinner about 15-18 inches of the bend of that fly.  Tom handled the boat beautifully; he had us on the best water throughout the day, mostly switching from one bank to the other depending on the flows and depths.  I even managed to catch a nice pure strain cutthroat trout during the float.   A first for me in all the years I've fished the Madison. 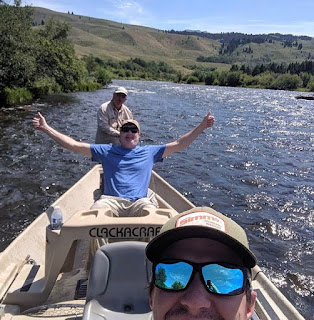 The float....Hunt, me, and Tom Cornell playing with the anchor.

There isn't a whole lot more to say except that the fishing was as good as I've seen it on the Madison in years, and we had a great time.   When we weren't fishing, we were taking breaks to eat and recharge our batteries.  In the evening, we made dinner and then tied flies every night until we couldn't keep out eyes open.  As we tied, caddis attracted to the lights covered the windows by the thousands.  There were also plenty of spinners among them, although the caddis were so thick you had to get close to see the slender mayflies. 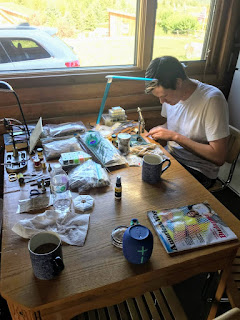 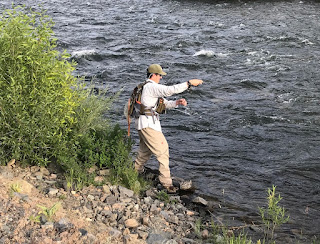 Hunt working the edges of fast water with a nymph. 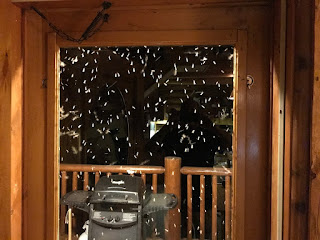 Caddis covering the windows at night. 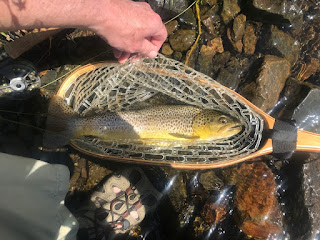 A typical Madison River brown trout - it looks small, but the opening of the net is 16".

And as is usual, we tied a bunch of different flies at home getting ready for the trip, but managed to only fish a small number of patterns once there. For subsurface we fished - Brown Serendipities, Galloup's BWO Nymph and Pheasant Tail Nymphs.  For dries - the Iris Caddis was the #1 top water fly, with PMD and Epeorus Spinners not far behind.  We also took fish on Missing Link Caddis #16, Tan Caribou Caddis #16, Hi-vis Ants #14 & 16, and Little Western Green Drakes.   I'll put up photos of the flies we used in another post. 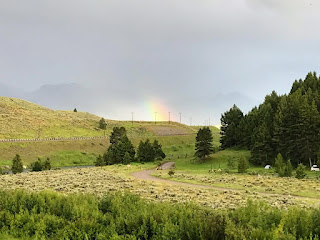 Late afternoon storm as it moved away to the North - time to go fishing!

We also got to spend some time chatting about fly tying and design with Kelly Galloup (more on that later), and also with Craig Mathews and John Juracek of Blue Ribbon Flies.

Sharpen your hooks and spend time with your kids!
Posted by Matt Grobert at 7:00 AM 2 comments: