I was hoping to post about New Jersey opening day tomorrow and the likelihood that the hendricksons would be popping, but the rivers and streams are flooded today.  It rained like crazy yesterday and last night, some rivers even hit flood stage here in the Northeast.  It looks like most will be too high to fish, and some may come down enough to fish but may be chocolate milk.  Get your weighted streamers out if you go.

I had high hopes before last night that we would see bugs this weekend since the daffodils bloomed last week and the forsythia are in full bloom here in New Jersey.  Maybe Sunday things will settle enough, otherwise, barring any more rain, early next week should be good if you can get out.

The wild trout streams and tributaries may be down enough to fish, so all is not lost.  Sometimes the smaller creeks and streams fish well after a good rain.

Posted by Matt Grobert at 8:55 PM No comments:

The Last Day of Winter... 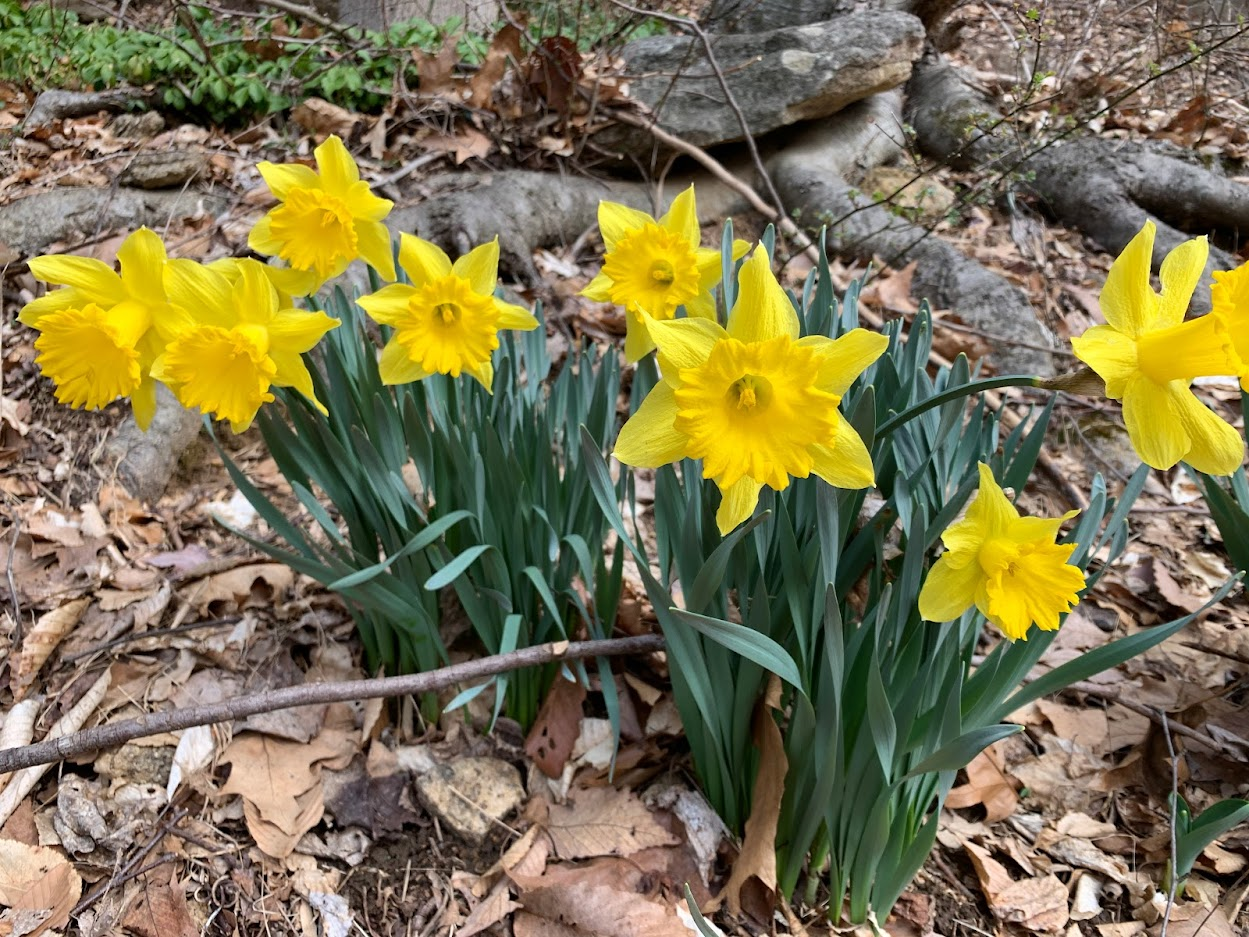 I got on the water about mid afternoon on Saturday.   It was warm and breezy with passing clouds randomly muting the bright sun.  The river water was chilly and clear as gin, and best of all, there wasn't another angler anywhere in sight. I had just cleaned my fly line and tied a new leader on the end of the heavy butt.  While I added tippet to the end of the leader, I noticed quite a few small tan caddis in the air along with a few little black stoneflies. Standing at the head of the pool in ankle deep water, I scanned the water surface for bugs and rising fish.

Sure enough, a fish rose in a slick between two fast currents about 25 feet directly across from me.  A half a minute later a tan caddis floated right through the same slick and was quickly taken by the trout.  I picked out a tan, size 16 caribou caddis from my dry fly box and tied it on the end of my tippet.  Stepping out from a bank a little so I had a sidearm back cast,  I worked some line out until I felt I had the right amount of fly line and tippet to make a reach cast to the head of the slick above where the fish had taken the caddis and then dropped the fly on my forward cast.  The fly landed a little short of the target.  Once the fly was well out of the target area I lifted and made a couple of quick false casts, adjusting my line length using the first cast as my scale, and dropped the fly in the slick about a foot above the target.

The fish took the fly as though it was just another natural.  I lifted the rod tip, set the hook, and the fish cleared the water before taking off downstream.  My drag was too loose! I quickly tightened the drag just enough to slow the fish down and get control and after a brief battle I netted a nice 12-13 inch rainbow.  I said hello, removed the fly from its jaw, and lowered the trout back into the water with it facing into the current where it swam out and away, disappearing into the dark depths of the center of the river.

Over the next hour or so I took a few more rainbows on that same tan caribou caddis dry.  It was a good match for the naturals that were in the air and getting blown onto the water by the on-and-off breeze.  For you bug nerds, the naturals were tan short horned sedges, Glossosoma sp. They are one of the first caddisflies to hatch in the Northeast, typically just before the hendricksons start to show.  And yes, they are starting much earlier than usual.

Having worked about halfway down the pool by this time, I stepped up on the bank above the water, leaned against a tree and thought about nothing....I didn't think, which is what happens when your time on the water melts away all the bullshit that goes on when you're not fishing.  This doesn't happen every time I fish, it's rare. Usually, my mind winds up some where between the bullshit and days like this, which I'll take any time.

Then it happened.  A nice fish rose a few feet from the bank 30 feet above me in the slow, shallow water that was maybe a foot deep.  I took slow steps down in the water in front of me.  The fish rose again in the same spot.  I moved out enough, maybe knee deep, to get a back cast and began working line out while false casting.  The fish rose again as I got into position, giving me a clear target with which to place my fly.  I dropped my fly a couple of feet above the fading rings of the rise, it drifted about a foot before the trout took it in a whisper of a sip.

Little sip by a decent fish.  I set by just tightening my line and was quickly into a fish that went straight to the center of the river.  After some head shaking, deep dives and back and forth short runs, I netted a nice 16 inch brown. I removed the hook from its jaw, took a quick picture, and then tipped my net into the water and watched it swim away slowly into the cold, clear current it came from.  Then on that high note, I stepped out of the river and headed back to my car.
The forsythia in my area are in bloom, so expect to see hendricksons hatching before too long.
Sharpen your hooks.
Posted by Matt Grobert at 7:00 AM 1 comment:

The Times They are a Changing

In the last few days I have been told by reliable sources that hendricksons are already hatching on some Pennsylvania limestone spring creeks.  I have even been sent pictures of the bugs, which are in fact, hendricksons.  Both male and female, and in one report trout rose to take them off the surface for a brief period of time.

Now I know that the spring creeks tend to have a more stable temperature range, but in 50+ years of fly fishing I have never seen a hendrickson in mid-March...ever, and I fish a lot.  I have seen a stray here and there in late March, but just one, and I imagined it was doing it's best imitation of an olive or a quill gordon. This is a male hendrickson (Red Quill) - 3 tails, dark smoky wings and big rusty eyes, size 14.  The females are one size larger, tannish pink underbelly (dorsal side is darker and often has some olive coloration), and small dark eyes.

What does this mean for our freestone streams?  Only time will tell, but just in case I'll be sure to have my hendrickson imitations when I'm on the water in the next few weeks.

I'll be on the water a couple of times in the next few days and report back what I see.  I'm hoping to only see olives and maybe some midges, but we're living in weird times so I guess anything is possible.

Posted by Matt Grobert at 1:11 PM No comments:

The last few weekend either I've been busy or the weather hasn't been conducive to fishing.  So of course, with this weekend being open for me, it looks like the weather is going to stop that notion in its tracks.

The long term forecast does looks better for next week.  In New Jersey, the little black stoneflies have been hatching well and should continue through the next couple of weeks.  Fishing a black pheasant tail nymph or small black stone, size #12-16, is a good bet right now.  And if you get lucky while on the water, you may even see the adults skittering along the surface and a trout or two rising recklessly to grab them for a quick meal.

The little blue-winged olives have been making an almost daily appearance on may streams in recent weeks and should continue to do so for a few weeks to come.   As usual, the hatches vary from day to day in intensity with the trout following suit.  And then there will be days when the hatch is good but the trout are practicing keeping their mouths shut while hanging close to the bottom out of sight.  So goes fishing. 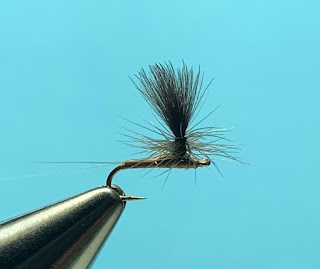 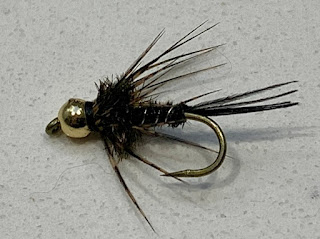 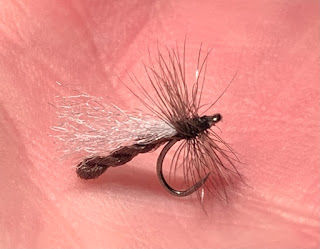 Yes, I'm still here and I am intending to get back to posting regularly!

The fly fishing show is this coming to Lancaster, PA next weekend - March 5 & 6 - at the Lancaster Marriott in Lancaster, PA.  I'll be there both days tying flies and doing presentations.  Show Hours are: Saturday 9:00am – 5:30pm and Sunday 9am – 4:30pm.

Saturday Seminar - 10:30 AM - Simple Flies for Selective Trout – Easy to tie hatch matching patterns that employ minimal materials and how to fish them.

Sunday Seminar - 3:00 PM – Northeastern Hatches & Their Imitations - An overview of the most common Eastern hatches, their imitations and how to fish the.