We had a great weekend at the Symposium sharing a tying table this year with Tim Flagler, who as most of you know from his videos, is a very talented fly tyer. It was a lot of fun tying with him as many folks who have seen his work both at the vice and with producing the videos, got to meet him and show their appreciation for his efforts. Knowing first hand how much time and effort he puts into each video, it was great to see.

Here's Tim putting the finishing touches on a nymph. 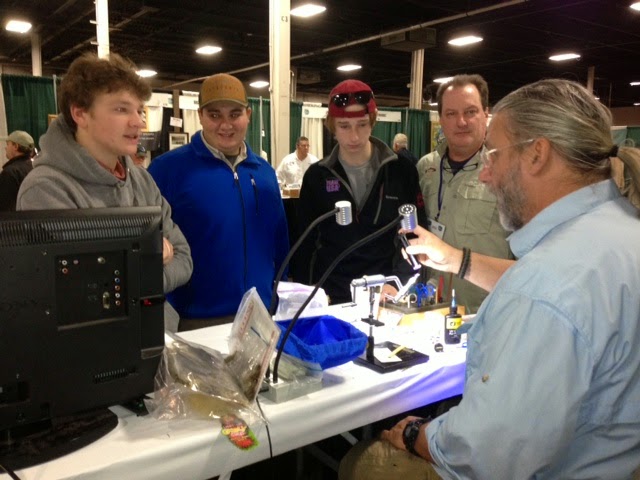 Douglas and his friends came to visit us today, which was a highlight of the weekend.  Doug, Bryson, and Alex, are members of the USA Youth Fly Fishing Team, and they share a passion for the sport much like I had at their age (and still have). Here's a short video I took of Doug today as he explains what some anglers do to get drag-free drift with dries to Tim.  Not only is Doug a very good fishermen, he can also articulate the nuances of the sport equally as well.

And finally, here's Bryson doing his imitation of Tim at the vice. 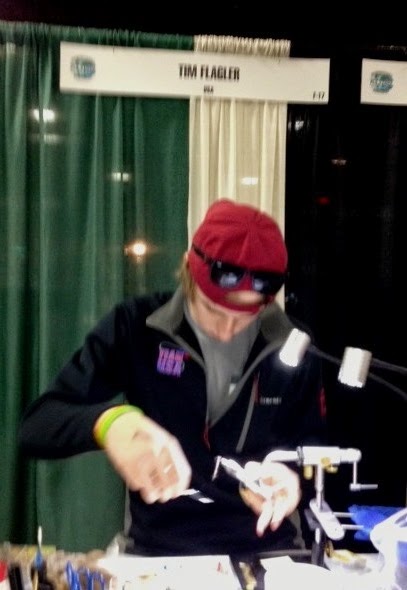 Sharpen your hooks.
Posted by Matt Grobert at 9:40 PM No comments:

I'm back in the saddle again, having sat down with Tim Flagler this past Sunday to tie this wonderful midge pattern under the lights.  It couldn't be simpler to tie, and the variations are unlimited.  I tie it here in a size #16, but recommend that you carry them in smaller sizes as well, especially for the winter months when the trout sip the little bugs hatching from the meniscus.


And don't forget to come see Tim and I and all the other fly tyers at the International Fly Tying Symposium this weekend at the Garden State Exhibit Center in Raritan, New Jersey.  Click on the link to the right for more information.

Sharpen your hooks!
Posted by Matt Grobert at 7:00 AM 1 comment:

One of the guys I met up on the Esopus last weekend, KJ Prince, sent me this video a friend of his made.  It speaks for itself, enjoy.

It is not every day I find a special stream like this with such robust wild brookies and indescribable beauty below the surface. Brook trout have lost a tremendous amount of habitat and genetic diversity to urbanization and excessive fish stocking. Please support and speak up for wild rivers and wild fish conservation. BlueBlood

Sharpen your hooks!
Posted by Matt Grobert at 7:00 AM 5 comments:

Many of my friends who are dyed-in-the-wool Catskill tyers will see this and think I have finally taken flight from sanity; some will say that happened long ago.  I assure you, I haven't, yet, but for shits and giggles I thought I would post something that pushes the limits for the sake of equal time. You are correct if you think I would not be caught dead with this pattern in one of my fly boxes, let alone fishing it, but that's just my opinion on this fluer.  Flu.er noun /phlew.er/ A mating of a fly and a lure by confused fly tyers.

Word on the stream is that this jig/fly/fluer/lure works quite well at times.

Let us know what you think.

For the record, as much as I enjoy learning and practicing old and new fly fishing and fly tying techniques, this "fly" is just too much for my own traditional sensibilities - see, I haven't lost all my marbles. That said, if it appeals to you, by all means fish it.

As usual, Tim Flagler does a great job of tying and filming the Squirminator, and he tells me it is deadly at times.

P.S. - Douglas, I still haven't been able to bring myself to tying on beadhead jig hooks. : )
Posted by Matt Grobert at 7:00 AM 4 comments: 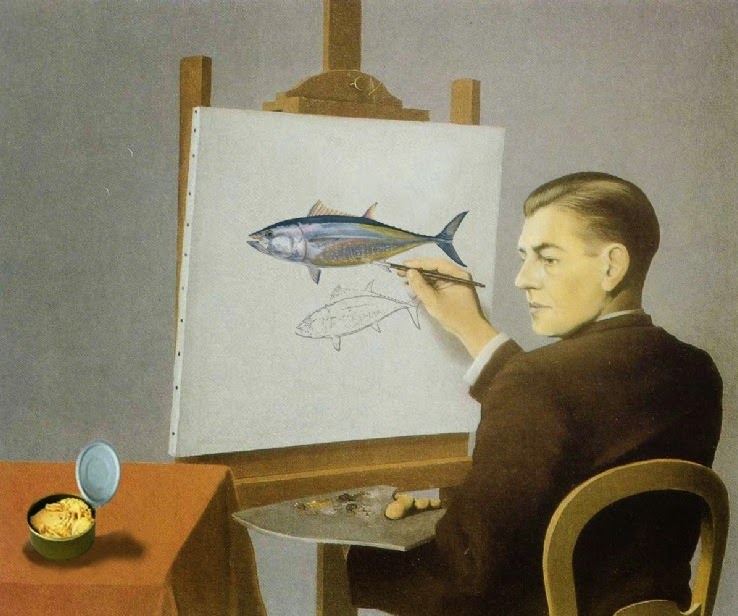 Posted by Matt Grobert at 11:38 PM No comments:

Yes, you read that right.  After seeing my post on Esopus Creek, one of our regular readers and feedback providers, Bill Shuck, sent me a photo of his version of Vinnie's Isonychia nymph.  So here it is - tis a well-tied fly that will work as well as any that I have tied, maybe better.  I don't know Bill's tying influences, but if I were to guess, this fly appears to be tied in the Catskill tradition - sparse tapered body with sweeping hen hackle legs, and beautifully proportioned. 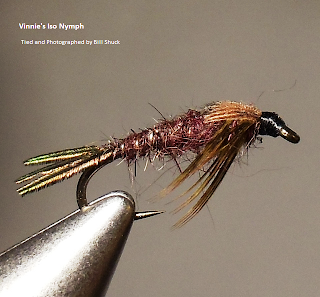 Sharpen your hooks.  And if you sharpen your scissors, we might have to put you in touch with Bill since he needs some pointers........I told him to just buy a new pair. : )
Posted by Matt Grobert at 8:25 PM 2 comments:

I finally had an opportunity to take up a friend's offer to spend the weekend at their second home in Woodstock, NY, and to fish Esopus Creek.  The house is located on the top of a mountain facing north with spectacular views of the surrounding mountains both near and far. 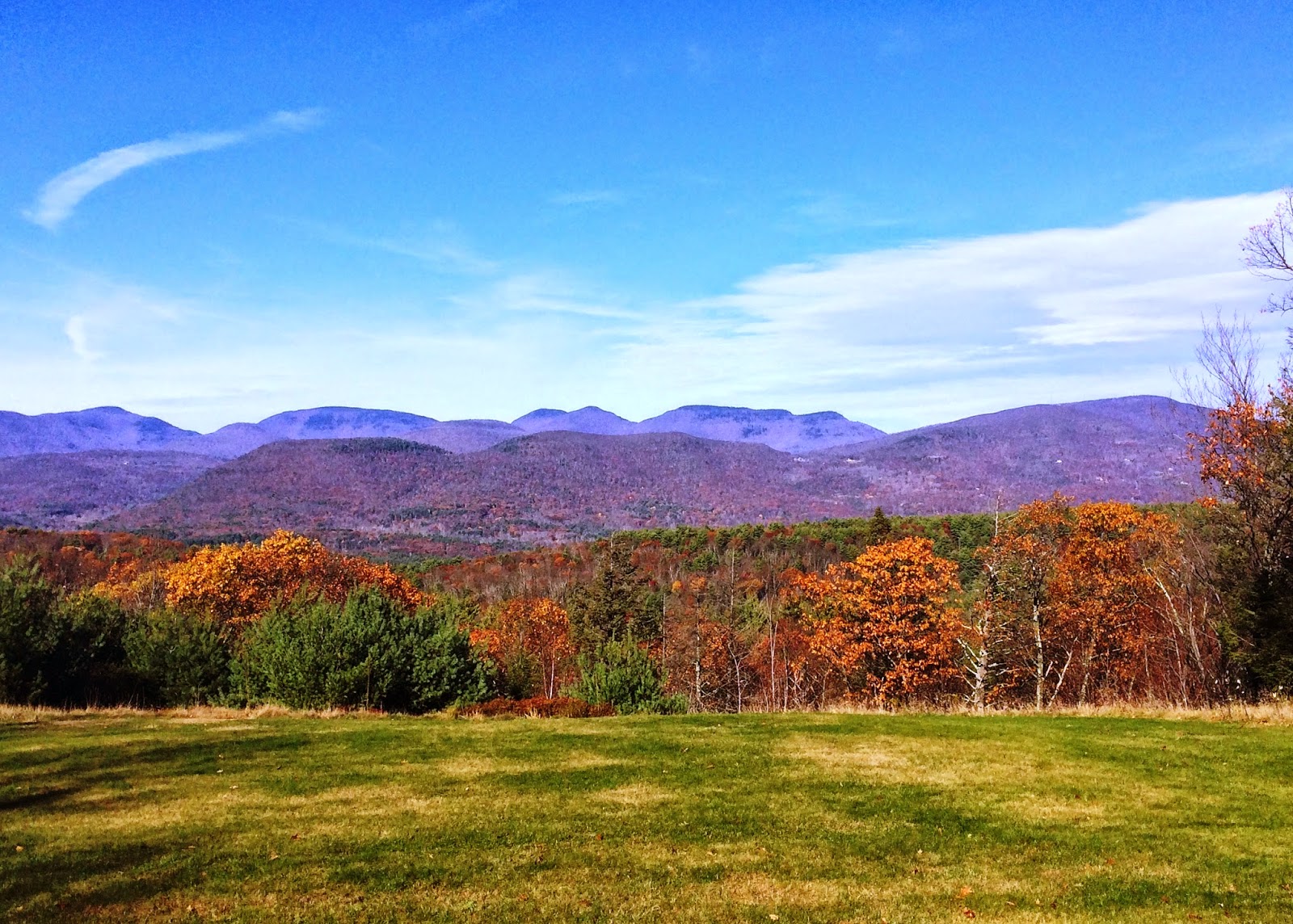 On Saturday, we didn't get down to the river until mid-afternoon.  The river was in good shape - flows were very good, clarity good, and very few leaves were in the water column and or on the surface. A steady breeze blew and the air was quite chilly under low, thin cloud cover.  Brian and Greg weren't up for fishing, so being a guest, I also opted out despite a very strong desire to fish what for me is one of my favorite trout streams east of the Mississippi.  Instead, I drove them to many of my favorite spots I have fished on the creek over the last 30 years or so, and gave them my take on how and why I fish each location the way I do.  Although Greg's house is 10 minutes away from the river, he has never wet a line in it, so I gave them a grand tour in hopes that he would give it go come spring. 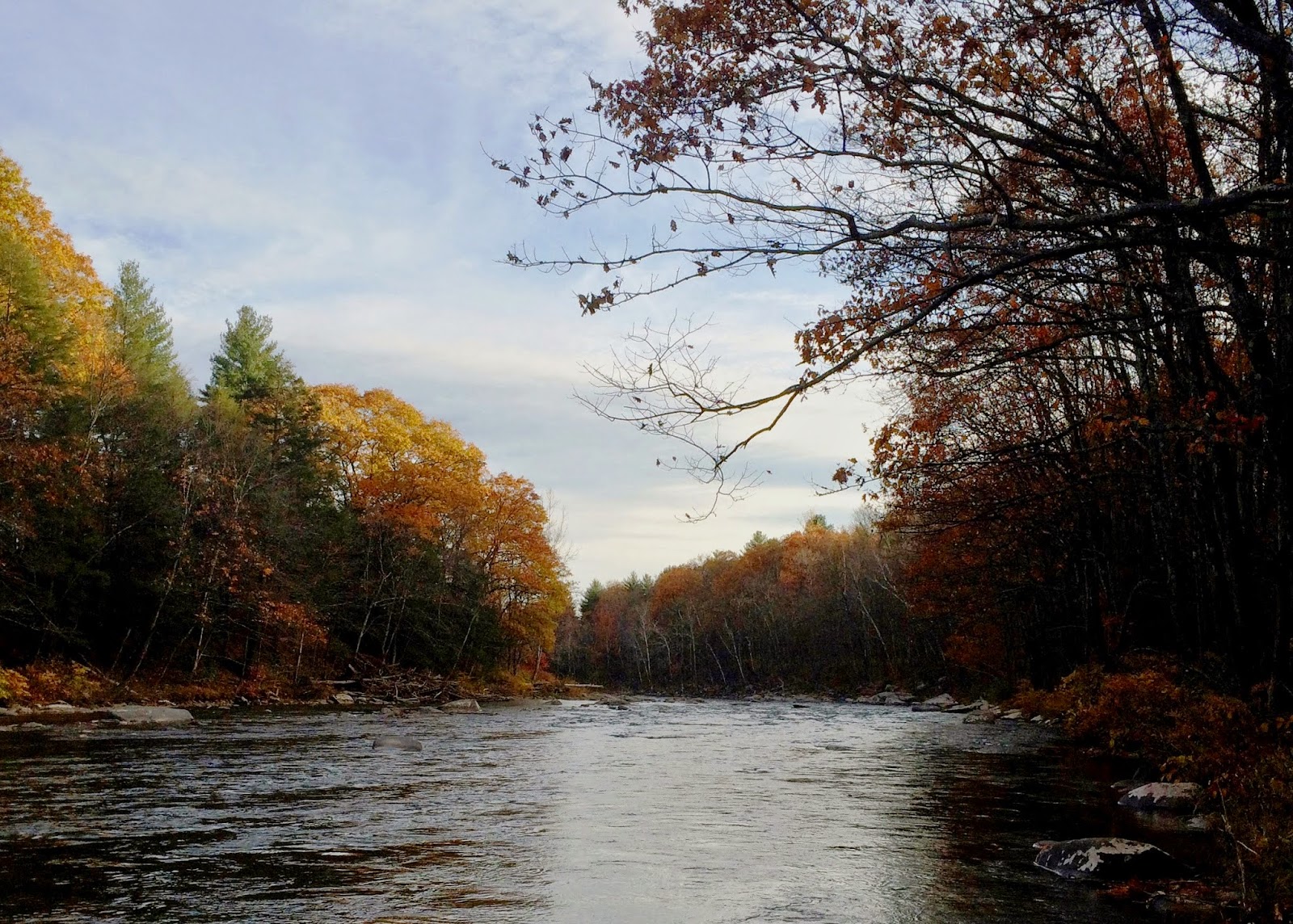 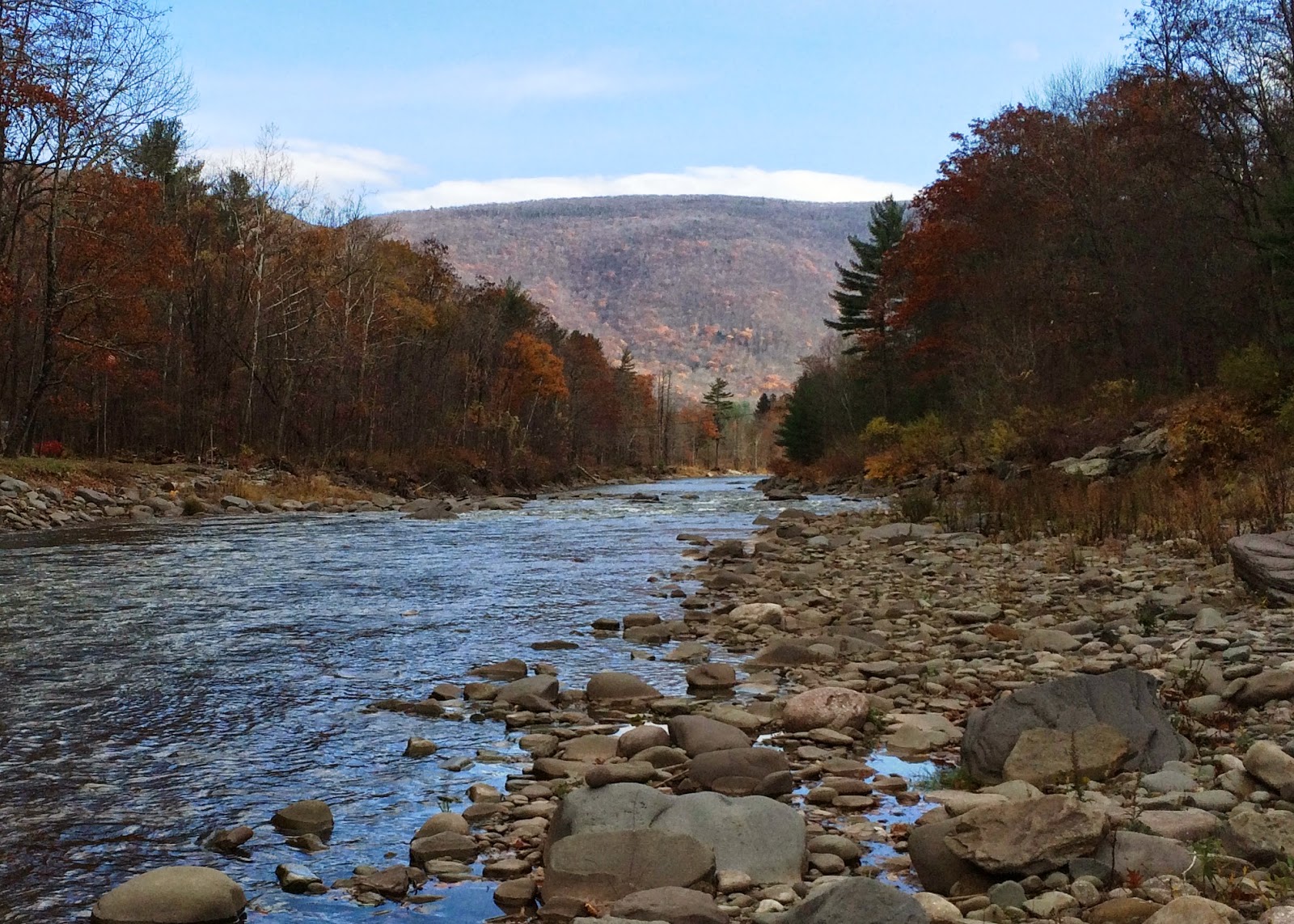 On Sunday morning, I got up to find the dining room table occupied with tired faces and hands wrapped around coffee mugs, and a general sense that no one was going anywhere any time soon. So I grabbed a cup of coffee, took a quick shower to wake up, and left to fish the river alone, which was just fine for me (and them; they encouraged me to go so I would stop encouraging them to join me). I got to the river, put on my waders, and was wading knee-deep in record time.  The air was cool, the sky bright and cloudless, and the river just as inviting as ever.  I tied on a Hare's Ear nymph, added some shot above it, and went to work fishing the long, fast run you see in the photo above.   As I worked my way down the run, the fish wanted nothing to do with my fly, not even a hit.  So I switched to another Esopus tried and true fly, a Vinnie's Isonychia nymph.  Three or four casts later I was hooked up to one the river's wonderful wild rainbow trout.  A small guy, maybe 8-9 inches long, but feisty nonetheless. 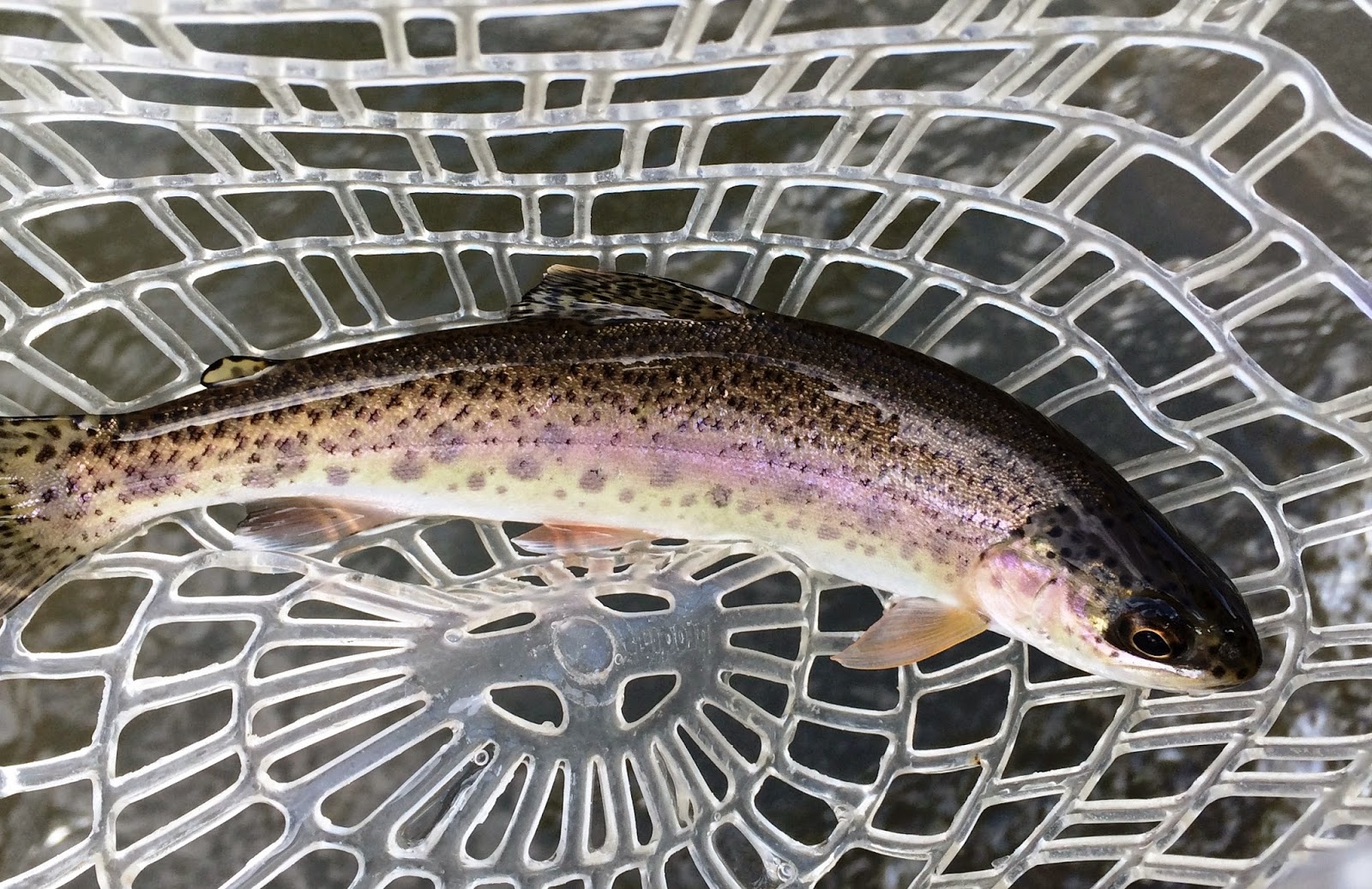 I fished for the next 5 hours and hit 3 different spots, catching plenty of the river's rainbows, all of them on Vinnie's Iso nymph.  It was one of those days that you just relax, soak in the fresh air, and fish with a clear mind and a level of focus that is effortless. 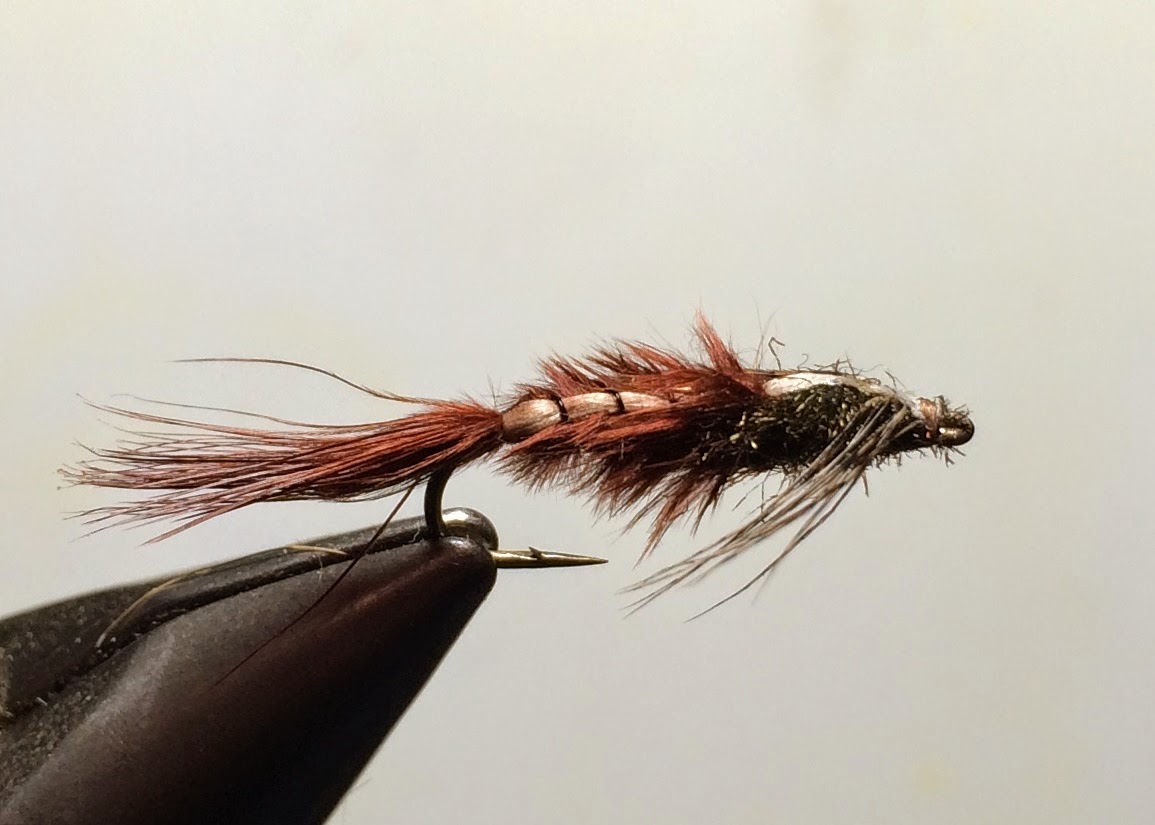 When I got back to my car after finishing up for the day, there were a couple of guys just getting ready to fish. We talked about the fishing and I shared how I had done and what fly worked for me. I gave them one of my Vinnie's Isonychia nymphs that I had used that day with success, and in return, one of them, Matt, gave me one of his Isonychia nymphs, which is shown above.  It's tied with a maribou feather, wire ribbing, a white feather stem for the dorsal stripe, and a thorax of peacock herl, I like the way the fly looks and I will be tying some up to fish in the future.  That maribou must undulate in the water and look life-like. 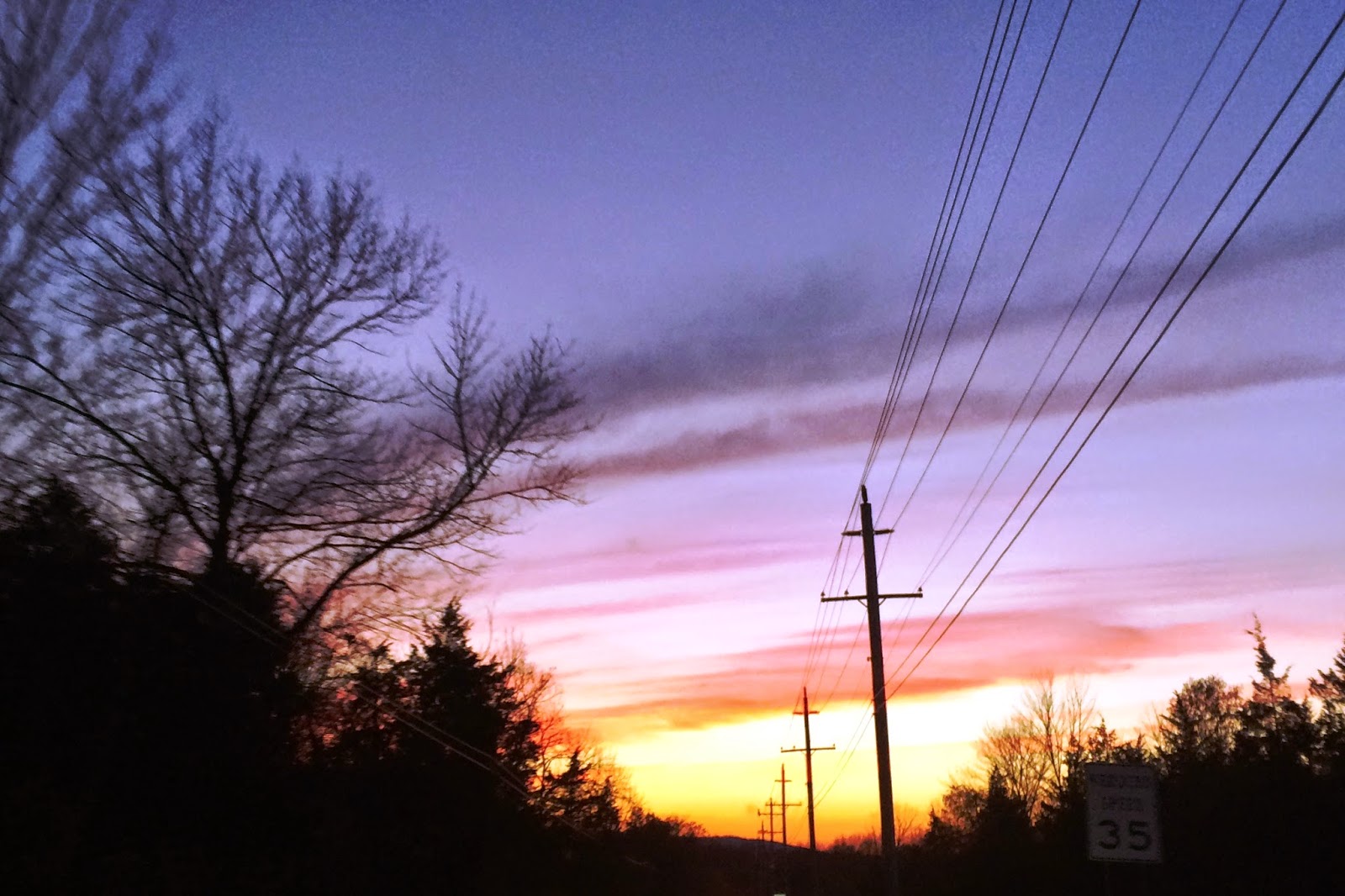 After I got off the highway and headed home on the local streets, my day was completed by a bright orange and pink sunset that guided me home and left me yearning for the next day I would find myself lost in a world that only flowing waters can provide.

Sharpen your hooks,and even if you don't, make sure you sharpen your focus on something along the stream you don't see at home.
Posted by Matt Grobert at 11:56 PM 2 comments:

Although I have been out of the loop lately as far as tying videos go, Tim Flagler has been putting up some nice videos recently.  The two shown here originated in the vise of the late Jack Gartside.  Jack was an original himself, having a unique style and sense of humor that could put a smile on even the stodgiest angler that came across his tying table at the shows.

In these two videos, Tim does a great job of showing how to tie two of Jack's best known trout fly patterns.


Sharpen your hooks!  (I think it may be time for us to do a video on how we do this, don't you think?)
Posted by Matt Grobert at 7:30 AM No comments:

I spent a few days in South Carolina visiting my daughter Leigh, Henley and his dad.  No fishing, but I think this beats that by far.  Of course, when the Little Man gets a little older, I'll have him casting a fly and laying out a line better than the guys that give me a hard time about my lack of posts here. : ) 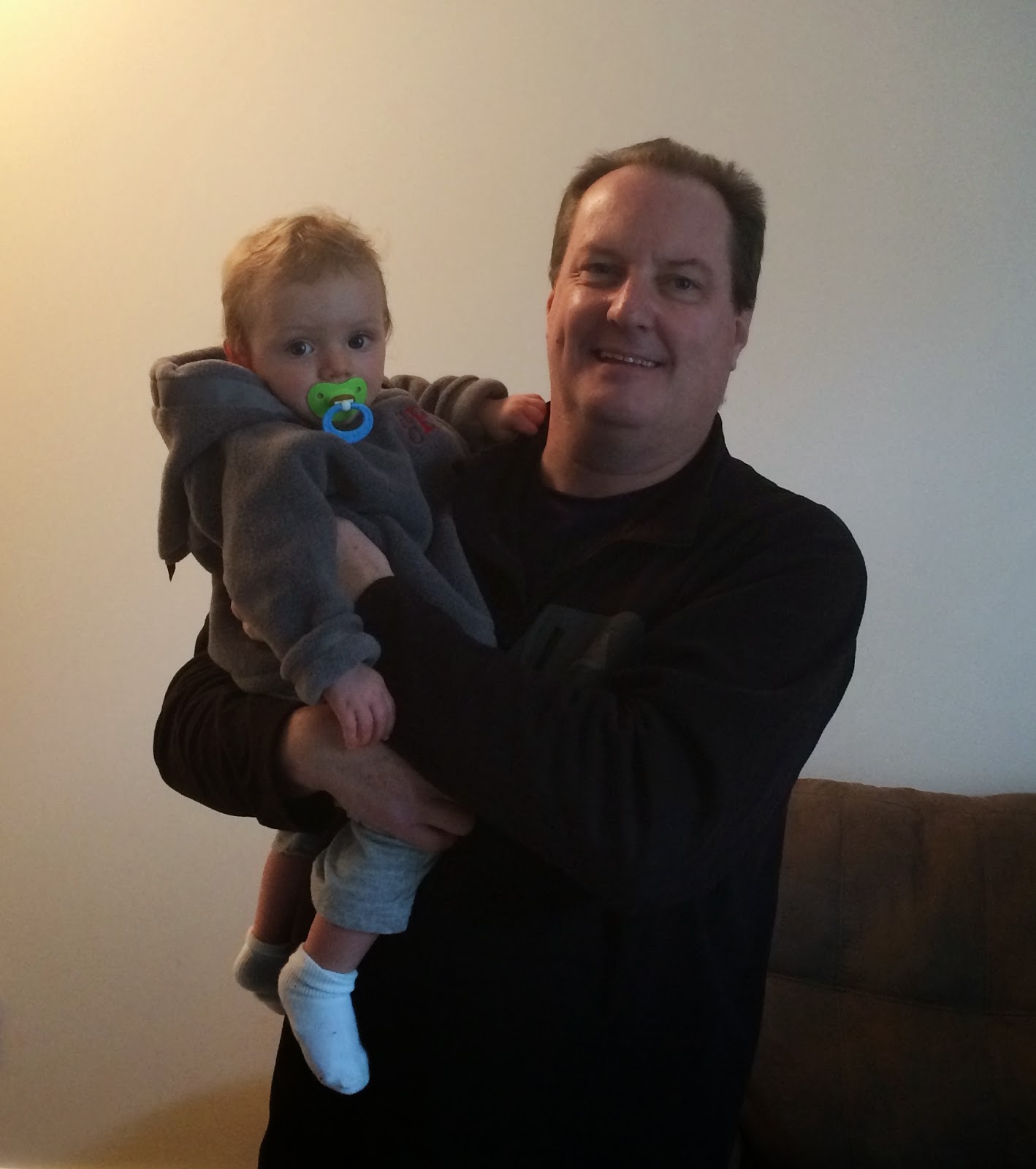 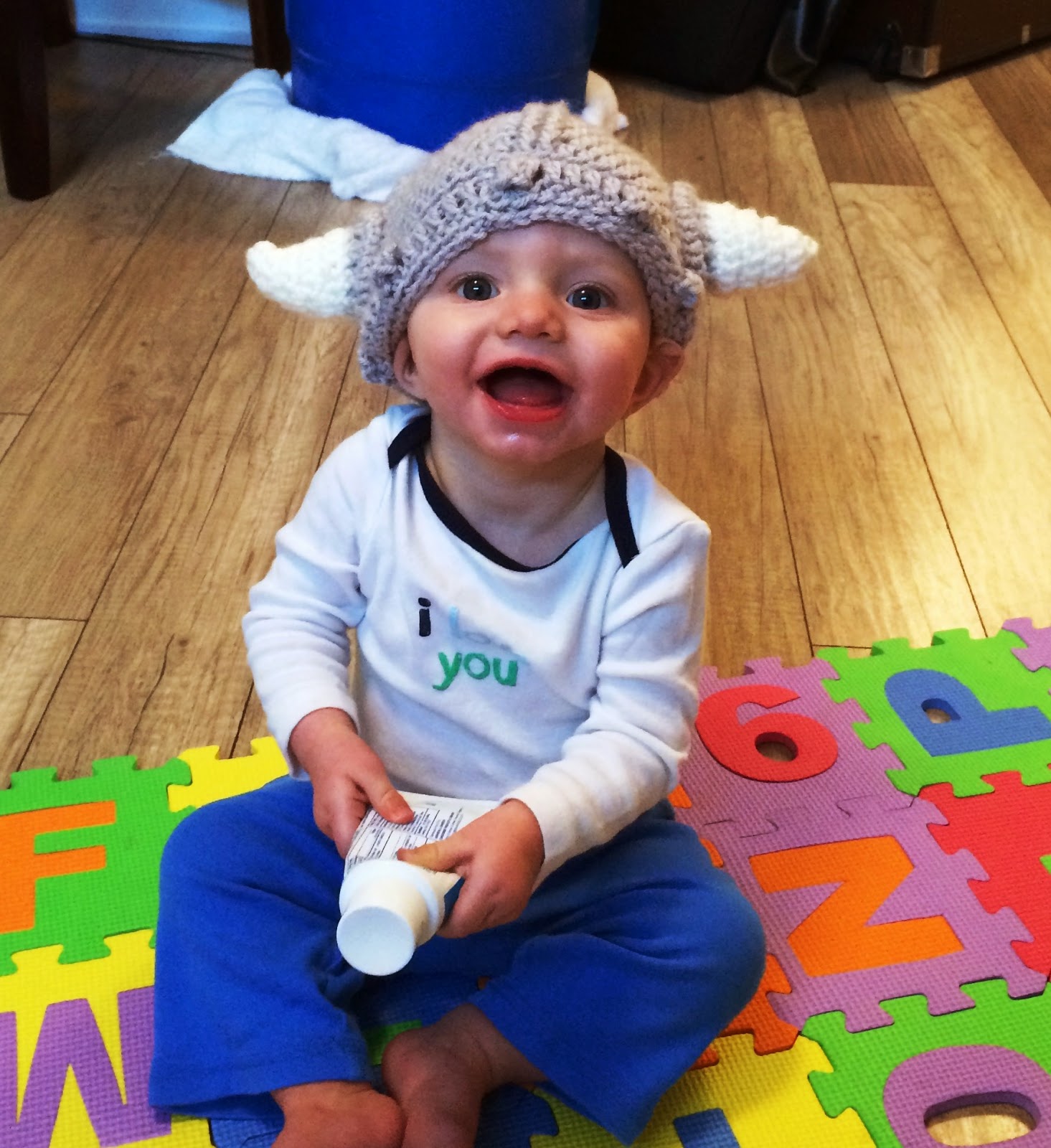 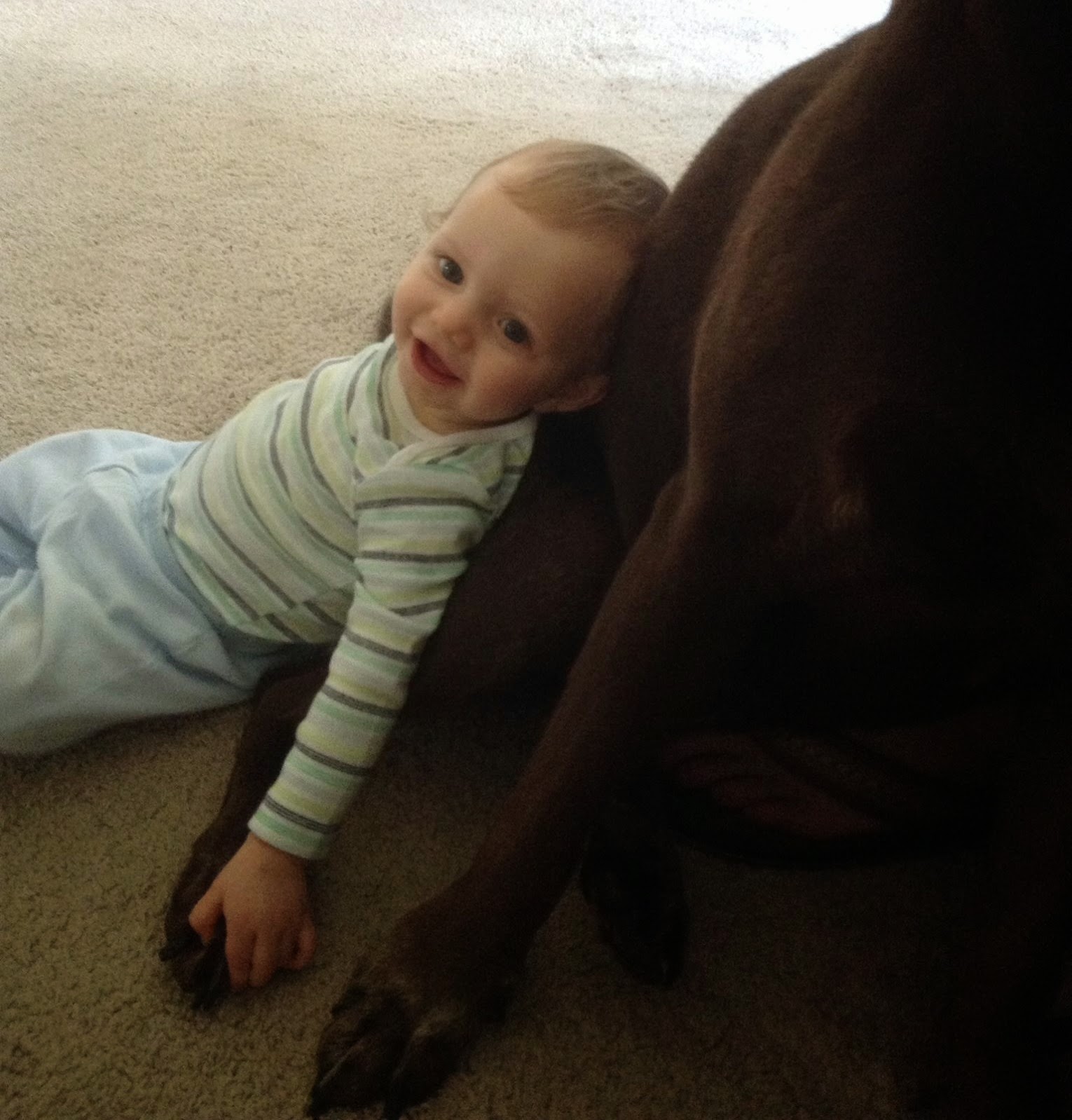 Sharpen your hooks; no matter what some guys say, it helps!
Posted by Matt Grobert at 4:07 PM 1 comment: