As summer comes to a close and the water temperatures begin to fall, it is with great pleasure that we introduce New Jersey’s 7th Annual NJ Fly Fisherman of the Year event. Our goal, as always, is the promotion of New Jersey fly fishing. The format will be a One-Fly Contest on October 29th on Shannon’s Private Waters at the Raritan Inn Bed & Breakfast, Califon, NJ. We are proud to showcase nearly a mile of private waters on the South Branch of the Raritan River as the site for this event. A fully restored 1850’s barn will house displays and dinner. The event is sponsored by The Raritan Inn, Shannon’s Fly and Tackle and co-hosted with the NJ State Council of Trout Unlimited.

Each NJ Trout Unlimited chapter is invited to select one (1) member each to participate in the event. There is no cost to enter and the day will include events such as casting demonstrations, The day’s events will be followed by a pre-registration only dinner @ $60.00, silent auction, and an awards presentation immediately following the day’s events.

Arrival and sign in will begin at 7:00 AM with an orientation at 8:00 a.m. and the start of fishing scheduled for 9:00 AM to 11:45 a.m. Initial contestants will be cut to three finalists competing from 1:30 to 3:00. A cash bar will be open from 4:00 to 6:00pm followed by dinner. Dinner registration is only on line and found here. Presentations and awards at 7:00pm will finish out the fun filled day.

Please join us for what is sure to be a day filled with fish and fish stories alike. We encourage each organization to be creative in selection of the fisherman (woman) representing the club. You might auction the slot, hold it for an honored member, or host your own event for a qualifier.

Yesterday morning Henley's little brother Bryson was born on Hilton Head Island, SC.  Both my daughter Leigh and Bryson are doing great and came home today.  He looks just like his mom did when she was born some 26+ years ago. 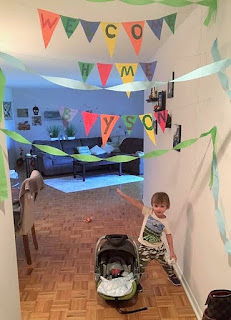 Now my son and I have Henley and Bryson to pass the torch to.
Posted by Matt Grobert at 10:32 PM 19 comments:

A US innovation that has seen fly fishermen using the strands of a kitchen mop as bait rather than an artificial insect has led to a fierce debate among anglers.

In a tradition-bound sport, where purists lure fish with tiny ersatz insects crafted of feathers and fur, the mop fly doesn’t look much like a bug. In an affront to tradition, it instead looks exactly like what it is: a fuzzy strand cut from a cheap mop and tied to a hook. Mr. Egan uses fluorescent greenish yellow.

The above is an excerpt from an article published yesterday in the Wall Street Journal, again opening up the proverbial can of worms on what constitutes a fly and what doesn't. Read it here: LINK I encourage you to read the comments, too. 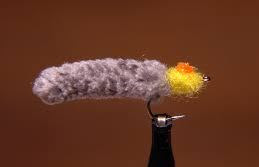 Who knows if the trout take these flies because they appear to be a food form, or if they just grab them as they drift by out of instinct to see if they are edible?  What I do know is that once they do take this fly, it is harder for the trout to expel it once they realize it is a fake because the material is made up of tiny, compacted loops of fiber that get caught by the trout's short, thorn-like teeth.  This often gives the angler extra time to feel the take and set the hook.  How do I know this?   I've been with folks that fish these flies and have seen how the trout's teeth catch the material when they remove the fly.    Does that make it less of a fly? No more than it makes the LaFontaine sparkle caddis with its fine antron fiber bubble less of a fly. In either case, the fly still has to be fished properly to get a trout to take it, and that's the point, isn't it?

In my opinion, this is just another example of a fly tyer being creative. It's not for everyone, as we all have our own perspective on what constitutes fly fishing, and that's good, it keeps things interesting.

So what's my own take on this fly?  You won't find it in my fly box.  Not because I think it is beneath me to fish, but because I prefer to fish flies that I tie and that to me are more imitative of trout foods. Would I fish it if I forgot my fly boxes one day and it was the only fly available?  Sure, why not? Besides it would give my friends another thing to bust my chops about.

And  finally, if you want to tie a version of this fly, here's Tim Flagler tying the Mop 'N Glo.


Sharpen your hooks!
Posted by Matt Grobert at 7:00 AM 1 comment:

More On the Puff Daddy

I thought I'd share a few more tidbits on the Puff Daddy; the cdc fly pattern we did the recent tying video on with Tightline Productions.  I'm told that the original was meant to roughly imitate a mayfly emerger/dry/cripple in or on the water surface. It is purposely tied so that it doesn't matter what side the fly lands on.  The fly works great not only for mayfly hatches, but also caddis, midges and as a general imitation when you can't figure out what the hell the fish are taking.  All you need to do is change the body color, cdc color and size to imitate whatever it is the trout want for a meal.

In the video, the cdc is wound as you would a hackle to get the desired effect.   This works well, but sometimes I like a more "puffy" version, and to that end the best way to get that effect is to use a cdc puff feather.  The problem with the cdc puff feather is that they do not have stems, so the fibers need to be tied in so they envelop the hook shank to get the same effect as winding a hackle.  Here's how I do that:

After dubbing and wrapping the body, take a cdc puff and separate it roughly in half so you don't have too many fibers, and lay one of the halves over the head with the tip going back over the body.  Make a couple of loose wraps over the fibers just in front of the body, and then using your fingers, work the fibers around the hook shank.  Once you have them evenly spaced, tighten your thread wraps and make a few more turns to bind the fibers in place. 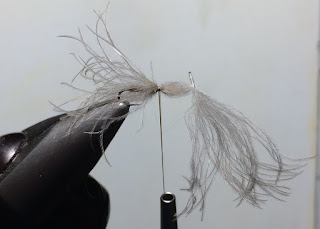 (Click on photos to enlarge)
Next, closely clip the butts off  and then finish off the head with a few wraps to cover the clipped butts, and then make a 3 or 4 turn whip finish. 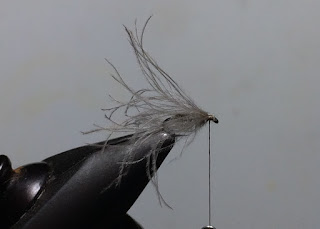 Use your thumb nail to break the fibers off at the bend of the hook as shown below.  If you are not sure how to do this, refer to the video. 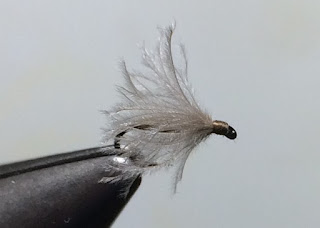 When I was in Montana, there were times when the fish wanted a spent caddis, and although the original version of the Puff Daddy worked on these fish, I thought I'd tweak the fly a little by adding spent wings of zelon as shown below before adding the cdc.  It worked, too.  I crushed fish the next couple of days on this pattern when the trout were on caddis. 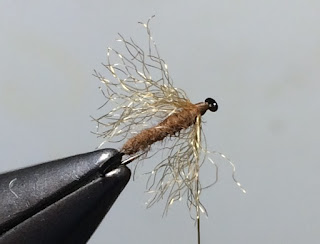 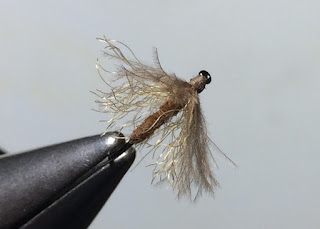 Tie some up.  The Puff Daddy is another simple trout fly pattern that I think will stand the test of time.

Sharpen your hooks.
Posted by Matt Grobert at 6:30 AM 2 comments: