The 2015 International Fly Tying Symposium is this Saturday and Sunday at the Garden State Exhibit Center in Somerset, NJ.  We will be there tying flies all weekend, and on Saturday at 2:30 pm, I'll be doing a seminar - "Fishing Dry Flies and Emergers for Trout".  There will be many others tyers from the USA and other countries, as well as fly shops, material and equipment vendors as well as other seminars and presentations.  Come on down and stop by and say and hello when you are there. 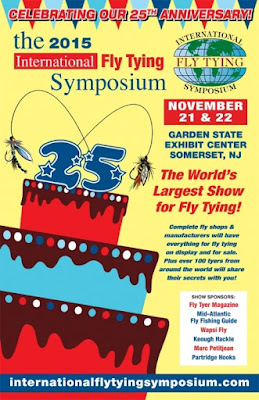 A couple of weeks ago NJ Trout Unlimited held their annual fly fisherman of the year contest at the Raritan Inn in Califon New Jersey, and again it was a big success.  The river was quite low and very clear, which made for tough fishing and mixed results among the contestants.  In the end it was a great day capped off by a banquet and awards dinner.  The winner this year was Sue Reed, who was representing Casting for Recovery.  As he always does, Tim spent the day filming the activities and put together this great video that captures the essence of the event.


Sharpen your hooks.
Posted by Matt Grobert at 7:30 AM 3 comments:

Tie some up.  And stay with us, I'm not done with the hand shaped fungus issue; I've lost too much sleep over it to let it go.  Seriously.

Sharpen your hooks!
Posted by Matt Grobert at 11:27 PM 3 comments:


There is a recent blog post on a fly fishing site about grip & grin shots and the proper handling of fish before they are released, and whether or not they are harmed depending on whether they are kept in the water or held up for a hero shot.  Like every other subject in America, there are tons of experts on this and most of them are very confident in what they don't know.  Or they just want attention, thus they will remain anonymous here. I'm not an expert, but I believe a little common sense goes a long way.  That's all I have to say about that, but if you want to read more, do a search on your favorite browser and feel the outrage.

What I am really interested in, is that on that same blog post, a so-called guide commented that he has "seen more than his fair share of fish with hand shaped fungus on them."  That folks, is a new one to me, and perhaps to you as well.  I have been fishing for trout for over 45 years in waters from Maine to California.  Some (many) are fished very heavily with the majority of anglers practicing catch and release.  And in all those years, on all those rivers and streams, I have never caught a trout that has hand shaped fungus on it.  Have you?

So, my question is; was this guy exaggerating (bullshitting) to make his point?  Or does this really happen and have I just not seen this phenomenon on one of the thousands of trout I have caught over the years?

I have caught trout with discolored skin, that may possibly be fungus, no doubt. Usually it is whitish and was found on their head, or fin(s), or back, but always it was without form and never resembling any part of a hand; or human, for that matter.

Angler 1: Hey, did you see that lip shaped fungus on that big brown trout I caught?

Angler 2: Yep, another idiot kissed his trophy before he released it......

Sure, I'm a little grumpy tonight, but I don't live or fish in a vacuum and this one kind of irks me.

Sharpen your hooks!
Posted by Matt Grobert at 9:32 PM 15 comments:

Brothers On the Fly - Welcome To Iceland

Two brothers went to Iceland to find out about the state of conservation in a country where fish and free flowing rivers are still abundant. The scenery alone is enough put Iceland on my bucket list. Enjoy.

Via: Moldy Chum
Posted by Matt Grobert at 7:30 AM No comments:

Labels: Brothers On The Fly, Iceland

Here's a neat little variation on the classic pheasant tail nymph tied by Tim Flagler.  Like every other variation of the pheasant tail nymph, this one works quite well, particularly when fished as a dropper off a larger nymph pattern.  It's always good to see a fly tied with 6/0 olive Danville thread!


Sharpen your hooks.
Posted by Matt Grobert at 7:30 AM 3 comments:

Fishing Today and The Next Arnold Palmer

I fished today and did quite well fishing #22 Blue-winged Olives to sipping rainbows in a long, slow pool on the South Branch of the Raritan River.  It was a beautiful day to be on the water; warm, breezy with intermittent sunshine through cracks in thick, dark, fast moving clouds.  There were just enough olives hatching to keep fish looking up as they slowly cruised about the pool.  When a fish rose I would quickly figure out the direction it was headed and then drop my fly softly on the surface a few feet ahead of it.  Sometimes they would change direction, sometimes they would swim right under it, and once in a while they would lift up and sip it in and I'd gently tighten the line with a strip set.  Just the kind of dry fly fishing I love; tough but rewarding.  I used a #22 olive sparkle dun at the end of a 12 foot leader tapered to 24 inches of 6X soft monfilament tippet.

I don't have any pictures, but here's something to put a smile on your face - Little Man practicing his golf in the kitchen.  I'm not sure if he likes hitting the golf ball or the floor more.


Sharpen your hooks.
Posted by Matt Grobert at 9:40 PM No comments: