Got a New Camera

It's been too long since I posted here, which tells me I've been working way too much and not thinking enough fly fishing.  I almost posted again the other day about another Ms. Leatherlungs on the train ride home Thursday, but I decided I wasn't going to do two posts in a row about long-winded know-it-alls that ride the train and talk as though they are in a room by themselves.
When I have been home, I've been tying quite a bit and writing, so when a friend gave me a new Sony 12 pixel camera, I had to shoot a few flies.  The camera is an inexpensive DSC-W230 - like a $200 camera - he won in a raffle.  The thing takes a decent picture.
Here's a Blue-winged Olive soft hackle emerger I tie that has a pheasant tail abdomen and tail, olive gray dyed austrailian opossum, and a hen hackle collar.  This one was taken with only my tying light on it.  The color is fairly accurate. This one was taken with only the overhead room light for illumination. These are a bunch of soft hackle Hendrickson emergers I tie in the same manner as the above BWO. They are for a fund raiser the Central Jersey T.U. is doing. 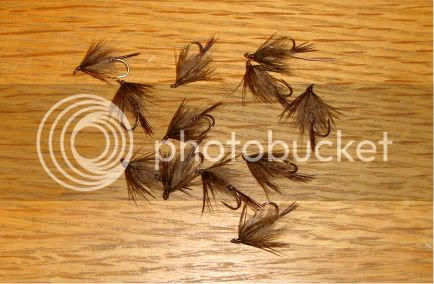 Here is a beadhead Bird's Nest that I used the flash on the camera to take, and the color is exactly as the eye sees it.

Here's one of my caribou caddis that I took from below, and this one also has very accurate color.  The shape and silhouette aren't bad either, if I were a trout, I'd sure as hell eat it!

And here is one of the big boys that has been hanging around out back of the house.  He has 9 points, and his rival, who was up on the top of the hill with the does has 10 points.  The two of them duked it out last Saturday and the big guy won after some serious antler crashing - it sounded like a couple of people fighting with broom sticks.  The battle lasted about 5 minutes and was mostly pushing and shoving and banging antlers, no physical damage was done to either buck from what I could see; the 9 pointer suffered a bruised ego, if deer have such a thing.  He walked slowly away with his head down and tail between his legs.  It was cool to watch, they're beautiful animals.  I just wish they would not eat the shrubs......at this point they can't, because they ate them all already............ I'm hoping to fish tomorrow after we get a tree in the A.M., and will post a report if I do.
And I'll sharpen my hooks!!  You should, too!
Posted by Matt Grobert at 10:41 AM