Beaverkill River - Lots of Bugs, Not So Many Trout

This past weekend my son Matt and I joined Vinnie and Paul up on the Beaverkill.  We had high hopes when we drove up Saturday morning as Matt hasn't been up to the cabin in 5 years, and the fishing has been good in recent weeks. When we left the house, it was cloudy after morning showers, which added to our optimism.  The bugs and the trout tend to be very photosensitive and usually cloud cover can bring the bugs out and the trout to the surface to feed on them.  But alas, by the time we arrived in Roscoe, the sun was out in full force.  Not to worry, it was a beautiful day with a light breeze, the river was in great condition, and the four of us were just happy to be hanging out at the house.

We decided to get a few things done and fish later in the day when the sun would be less intense and we hoped a good evening hatch would ensue.  We cracked a few beers, the three of them went out to mow the grass, trim and do some general landscaping, while I sat and tied flies to music at full volume to drown out the power tools  - all the windows were open.  That's how is usually goes, I get to tie the flies we'll use in the evening while the others do a little sweating.  It's a division of labor that no one seems to have an issue with.  While they were working outside, they found this little guy in the bushes next to the house. 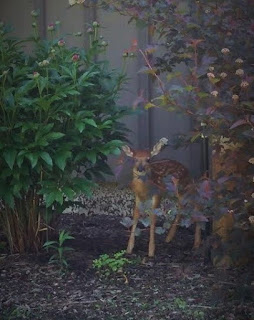 Around the time most folks are just sitting down for dinner, we headed out to fish the lower Beaverkill.  When we got there we were encouraged by the cool air and lack of any breeze.  The river was beautiful - clear, a little low and it just felt right.  The river here is lined with hardwood trees that rise up the steep river banks in a thick, fresh green canopy that hides the thick-barked trunks that lie within.   There were a few insects in the air, mostly caddis and an occasional mayfly, but rising trout were scarce and those we did see rose once and then were done.  Here's Matt working on the one trout we found rising regularly, and well upstream is Paul (the little white figure practicing his casting). 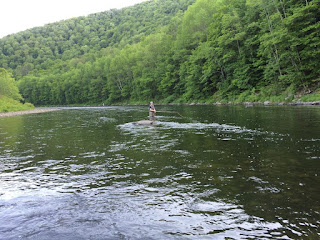 As the sun fell from the sky towards the horizon, the number of insects hatching increased yet much to our dismay very few trout rose to take them.  There were large and small Sulphur duns and spinners, Grey Fox, Slate Drake duns and spinners, Cream Variants, and at least three different species of caddis - speckled, grey and little black.  None of the aforementioned were hatching in large numbers, but there were enough that we thought for sure that by dusk there would be plenty of trout rising to them.  It never happened.  Matt caught a smallmouth bass, and as we were walking up the river bank to call it a night, I saw a trout rise in a seam, I cast to it, and it took my caddis imitation. That was the one and only trout we caught.

After a steak dinner at the Riverside Inn, we headed back to the cabin, made a good sized fire in the fire pit.  A little whiskey was poured, a few beers were had, and we sat around the roaring fire until 3:00AM talking, laughing, telling fishing lies, and listening to music.

Sharpen your hooks.
Posted by Matt Grobert at 10:36 PM

Baslow, it was a great time despite the fishing being tough. Sunday morning was much the same, with few bugs and Paul caught the one fish we saw rising. We'll just have to get up there and do it again!

When we in our beloved ADK camp on the West Canada sometimes I tell my boys it's so quiet and peaceful hopefully the fish don't bother us...:-)