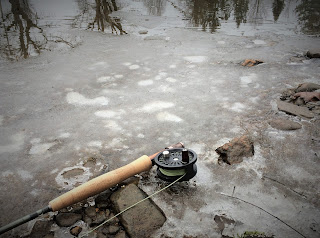 Despite having a touch of the flu, I decided to fish today, believing that a positive outlook was the best medicine.  I also figured that with an extended forecast calling for much colder temperatures over the next couple of weeks, I would have regretted it if I stayed home.  Besides, my nose was going to run and my stomach was going to feel like crap no matter where I spent the afternoon, so why not spend it doing what I love.

The day was damp, and the air heavy, often with a fine mist falling from thick gray clouds.  The ambient temperature was in the low 40's, with an off and on breeze making it feel colder at times.  The river had remnant shelf ice along the edges from a couple of single digit nights during the prior week.  Water was clear, at a nice level, and fairly chilly as registered by my bare hands.  I saw a few anglers up and down river from me, but I was mostly alone and happy to be on the water.

As I always do before I rig up, I cleaned my fly line.  The photo below of the cleaning pad after I ran my line through it illustrates why: it removed quite a bit of fine dirt and river scum from the line even though I had only fished once since I last cleaned it.  Just think how much "stuff" coats your line when you don't clean it for weeks or more!  It only takes a few minutes and it really does make a difference - your line will float and handle very well (like new) every time you fish, and at $75-80 a line, it will last longer - a win-win proposition. 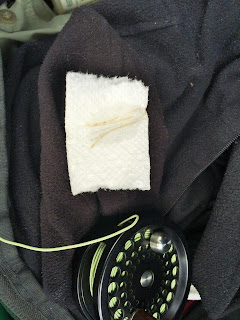 Today the trout were in the quiet water, at least they were for me.  In three hours of walking the bank and working all of the water within casting distance, I caught a bunch of nice rainbows, all of them in the calmer water alongside the faster runs.  I did fish fast water, too, the pockets and deeper pools, but to no avail.  I also did something I rarely do, I fished two flies.  The anchor fly a Walt's Worm, with a brown and yellow LaFontaine sparkle caddis pupa as a dropper about 12 inches off of the heavier fly.  For the record, I tie the dropper to the eye of the anchor fly, not to the bend.  I like that this set-up leaves the hook of the anchor fly unencumbered.  Here's the largest fish of the day, a nice rainbow that took the Walt's and jumped a few times before coming to net. 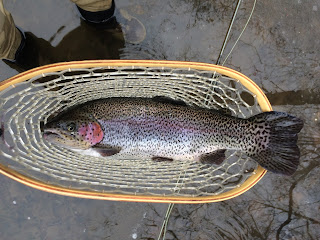 All in all, it was a good day on the water, especially for mid-January.

Sharpen your hooks.
Posted by Matt Grobert at 11:00 PM