After fishing the Bighorn River for four days four of us headed over to Paradise Valley, just south of Livingston, to fish Armstrong Spring Creek for a day.   Armstrong is an internationally well-known destination that offers a wonderful fly fishing experience for a limited number of anglers each day in a beautiful setting. The river runs roughly parallel to the Yellowstone River and  is about 1.5 miles in length. The consistently clear, cold flows make it ideal for both hatches and wild trout production. 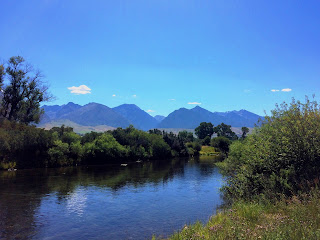 When we arrived mid-morning, Pale Morning Duns (PMD's) were hatching well and fish rose to take them off the surface throughout the river.  The blue sky was a bright with sunshine, and the air calm, dry, and already very warm.   It was easy to find a target with all fish rising, but the varied currents and gin clear water made it necessary to to use long leaders, fine tippets and accurate casts from a well-chosen position.

I found a nice run where the river tightens below the long smooth pool you see above, and eased my way in a ways down from where several fish worked the edges of the faster currents.  I had almost 3 feet of 6X tippet on the end of a 10 foot leader, to which I tied a #16 PMD cripple, before casting my offering to a nice brown working the left edge of the run about 25-30 feet above my position.  The fish turned and followed my fly on that first cast before casually dropping back to its holding place with a seam in the undulating weeds that line the bottom of the river. My fly must have dragged.  The next cast I finished with hard follow through sending the fly well past where the fish was holding before stopping the rod tip short causing the line, leader and fly to bounce back, before landing on the water in nice "S" curves, and dropping the fly a foot and a half above the fish.  The fly drifted for a second before the fish rose up and took it with quick, audible sip, and I lifted my rod driving the hook into its upper jaw.  It jumped a few times and in few minutes I had my first 2016 Armstrong Spring Creek brown in my net. 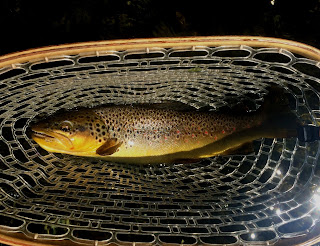 By the time the sun was directly overhead, the PMD hatch was just about done for the day and in turn, fewer fish rose to the surface. The rise forms changed to; from confident, audible takes, to soft, silent sips. With the heat of the day upon us, the breeze had kicked up and big, fluffy clouds moved over the valley creating short-lived, passing shadows on the water.  Scattered tiny blue-winged olives, small caddis, midges and various terrestrials floated by, making fly selection a little more difficult.  For all we knew, each rising fish could be taking a different bug, or even taking whatever floated over them as their mood dictated.  I switched to a 7X tippet and tied on my pheasant tail simple snowshoe emerger in a size #22, and spent the next few hours stalking rising fish.  I took a bunch more fish, both rainbows and browns, and had a few more long distance releases. 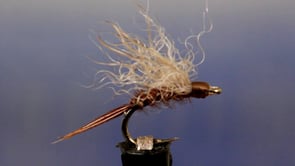 Below me, about halfway down the pool I was fishing, my son worked a bank lined with willows.  After missing a few on the take, he hooked and landed a nice rainbow on a PMD spinner. 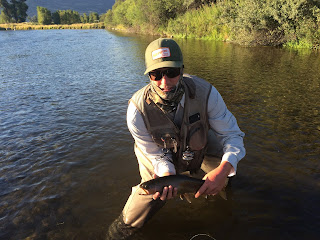 We fished until dark, taking breaks every so often to go back to the car and rest in the shade, snack and hydrate.  We drank almost a case of water between the four of us - the dry air made it to the mid-nineties F. I stayed with the pheasant tail emerger and took quite a few more fish before calling it a day.  We had a great time, we all caught fish, and we plan on going back again next time we visit Montana. 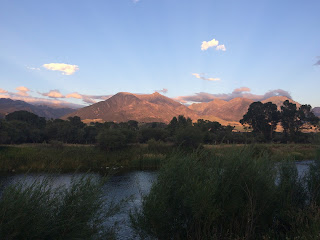