Another Weekend In the Catskills

Last weekend we headed up to the Catskills again with the usual characters.  This time though, after fishing Saturday evening, the four of us were joined in the evening by seven anglers from Rahway River Trout Unlimited, making for a crowded cabin on Saturday night.  It worked out great though with everyone pitching in with the burger and dog dinner, before we settled in around the fire and talked fishing, fly tying and music.  A few guys had to camp out on the floor in their sleeping bags, but no one seemed to mind.

Earlier, we fished a favorite pool on the Beaverkill, where the sparse hatches of sulphurs, caddis and tiny blue-winged olives brought trout and shad to the surface.  At dusk light cahills began hatching and in the dark we could hear quite a few fish working the surface.  We had a good evening with a couple of trout and two shad, one that was good sized and battled hard despite having swam over 300 miles up the Delaware then the East Branch before taking my Iris Caddis on the lower Beaverkill. 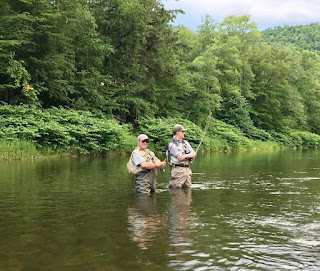 On Sunday morning everyone split up to fish their favorite pools on either the Willowemoc or the Beaverkill.  Vinnie and I went down to angler free pool on the lower Beaverkill.  The day was very warm and humid and we knew that by midday water temperatures would hit 68-70 degrees and put a halt to fishing.  The path to the river was thick with invasive knot weed thanks to the frequent spring rains - every year it seems to grow higher and thicker than the last. 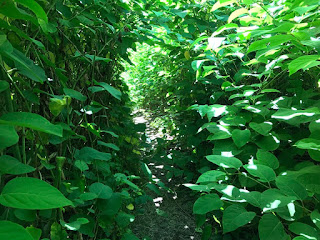 The river was clear and at a normal level, with only tiny blue-winged olives, some of which were hatching along with spinners falling.  A good breeze blew upstream. Trout rose softly to the little insects drifting on and in the surface film along the far bank where hardwood trees provided shade.  We split up each heading to where small pods of trout dimpled the water surface as they took in morsels that to us seemed way too small to be worth their effort. 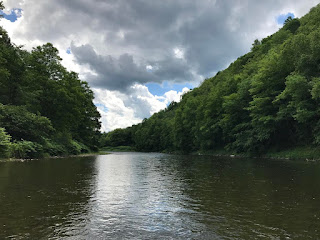 I tied on a size 22 snowshoe rabbit foot blue-winged olive to the end of my 6x tippet and then slowly worked my way within casting distance of the nearest working fish.  I made a few test casts, found that my 12 foot leader turned over well, but the light tippet and fly were sent upstream at a right angle thanks to the breeze.  It would be one of those mornings when one had to time their cast to drop when the wind dies for a brief moment.  I cast to the working fish and when I got a good drift, it rose up, inspected my offering, and then drifted back down to the bottom.  This happened several times, and I think the issue was micro-drag thanks to the myriad of currents shifting from the many large rocks lying just below the surface.

After a short while and a few dozen casts over that fish, a trout rose about 25 feet above me in a fast slick.  I let it rise again, pin-pointed its locations, and made a quick cast dropping my about a foot above where it rose.  Almost immediately, the fish came up and sipped in my fly, and after a brief fight I brought the 11-12 inch wild rainbow to my net.  I admired it for a second, removed the fly from its upper jaw and then dropped my net back into the water where the fish swam out to safety.

I fished a while longer, getting more than a few refusals, and then backed out to shallower water where took the water temperature.  It has hit 69 degrees F, so I cut off my fly and reeled in.  Then I waded down to Vinnie and gave him the news, and he too, called it a day.  He had a few good takes he said, but missed them, which is unusual for him. It was a good day for both of us though; how often in late June can you find a pool on the Beaverkill with no other anglers and rising trout?

Here's the fly I have been taking the bulk of my fish on the last few weeks up north. 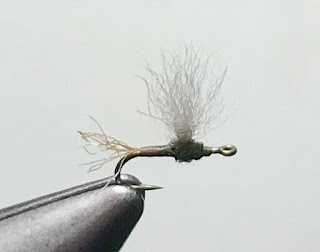 Sharpen your hooks.
Posted by Matt Grobert at 8:00 AM