I managed to get out on the South Branch this afternoon for a few hours and ended the weekend on a high note.   It was around 2:00 pm when I waded along the banks of the low, chilly water that was so clear one could make out every leaf moving along in the water column, and even some of the trout holding on the bottom among the rocks and stones. The skies were mostly clear with a decent breeze that made the 45 degree F air feel like it was much colder.  There wasn't another angler in site and only the faint sound of bicyclists and their chatting from the old railroad bed turned walking/cycling path that follows the river a short distance away. 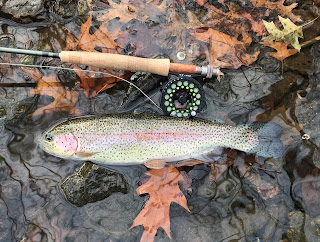 I started out with a #15 ( TMC102Y) tan Iris Caddis off the end of 2 feet of 6x tippet with a small split shot about 6-8 inches above the fly.  I typically would use 5x tippet, but the water was quite low, clear and moving at a snails pace compared to what it usually is.  I moved up the left bank of the river making straight upstream presentations into seams and deeper pockets; after giving the fly a second to sink, the line is stripped back at roughly the same speed as the current.  In a very short while my line stopped, I lifted the rod, and was into a nice rainbow that jumped a couple of times before I netted it.

After working my way up the stream a bit without another take, I switched flies to a #20 pumpkin head midge and took off the split shot.  I continued to fish upstream, covering the water from the near bank to the far bank before taking a couple of steps up and repeating the process.   I hooked and landed a few, and lost one as I brought it to net.  The fish were all rainbows that were 12-15 inches or so long.

As the sun dipped to the Southwestern horizon I came to a favorite pool that always holds a few fish and despite my hands and fingers being pretty much frozen stiff, I changed back to the Iris Caddis since the midge had stopped producing.  About a dozen casts into top of the tail out my line jumped and I set the hook on the rainbow you see in the photo above.  After releasing the fish I snipped off the fly, reeled in and took my rod apart, and made my way back down stream in the draining light to my car.

To see how the two flies mentioned above are tied click on:
Iris Caddis
Pumpkin Head Midge

Sharpen your hooks.
Posted by Matt Grobert at 10:00 PM

So, which one is your "favorite pool"?