Happy Father's Day to all of the dads out there!


I had an early Father's Day last weekend with my son, Hunt, who came down from Boston to fish with me and some of our friends in the Catskills.  Hunt worked until 5 before driving down so Friday evening I fished with Steve on the East Branch of the Delaware River.  It was a beautiful time to be on the river with barely a breeze, warm at first, and clear.  As the dusk settled in, the air cooled and sulphurs, isonychias, gray fox, green drakes and caddis hatched sporadically but the fish didn't cooperate beyond a bunch of one-and-done rises that were little more than a tease.  When the sun dropped below the mountains, the sky above us filled with march brown spinners.  The spinners hadn't dropped to the water by the time darkness set in so we packed it in and went to get some dinner and get back to the cabin before Hunt arrived. 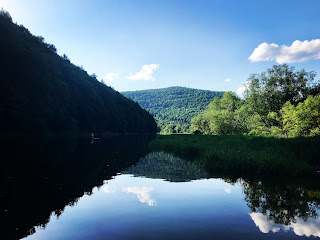 (Click image to enlarge)
Here's a march brown spinners that greeted us under the cabin lights.  Check out the length of those tails! 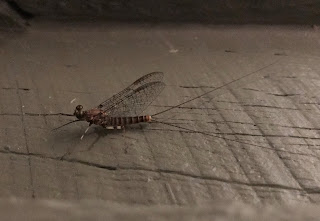 We were also greeted by this giant cream pattern-wing sedge - Hydatophylax sp. These are very large caddisflies - this one is a good 1.5 inches long! Over 2" including antennae. 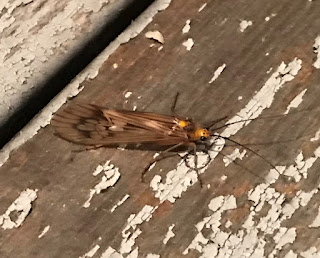 Saturday we fished in the morning hitting many pools on the Beaverkill, but the bugs were sparse and with that very few fish were rising.  Being June, we had no interest in fishing nymphs so by early afternoon we called it quits and went back to the cabin to tie some flies for the evening and catch up with Hunt on the last few months in Boston and his new job.

Saturday evening the bugs really didn't get going until dusk, but when they did the fish responded and we took a few nice browns on Iris Caddis fished in the film.

On Sunday morning we fished a bugless Beavekill.  We hit a bunch of pools and all were pretty quiet.  We saw very few anglers as a result.  In the early afternoon though, we noticed a couple of fish working right off the far bank of a wide, flat pool and Hunt decided to see if he could reach them with a biot body/cdc wing cornuta spinner.  He worked hard, making 50' + casts, and over about 20 minutes or so managed to get a couple of soft takes but no hook ups.  Determined, he changed position to get above the fish a little more and after a short while he got a solid hook up that he brought to net to finish up a great weekend. 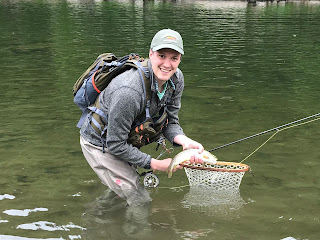 The only thing missing were Hunt's two sisters, Megan and Leigh, who are always with us in spirit when we fish. 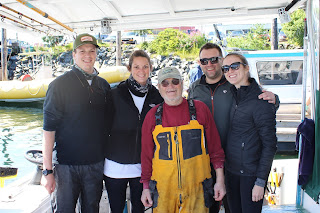 Hunt, Leigh, Captain, Michael and Megan
Have a great day everyone!
Posted by Matt Grobert at 11:29 AM

You too, Brook Trout!

That long flat stretch looks like you fished the King's property.
Calm bluebird days can be tough on those waters.