It has been many years since I first went to Montana for the first time with a good friend, Don, to fish the Madison River and the surrounding trout waters, and I still get just as excited today as I did then.  This year I'm going with the usual crowd, albeit without my son and a couple of the others.  We going to be spending half the trip on the Madison River, and the other half up on the Missouri River.  In preparation, I'm tying all the flies I typically use when on those waters in late July.

Here's my Sawyer's Pheasant Tail nymph.  For me, this is a must have fly as it aptly imitates the PMD nymphs so common and available just about anywhere in Montana in July.  I typically fish it by itself on the end of a long leader casting it straight upstream at the heads of pools and in the riffles; depending on the water depth and speed, I may put a split shot or two on the leader above it.  It works great. 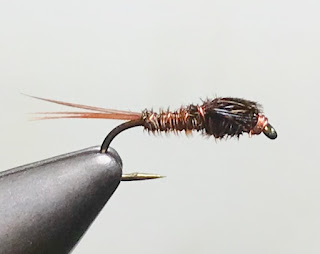 This is Kelly Galloup's Improved Blue-winged Olive nymph, which is a variation on the Sawyer Pheasant Tail nymph.  It has a peacock herl thorax and gills of a white, sparse dubbing material.  I used Senyo's Laser Dub here.  This fly has been very effective for me the last few years both here in the East and in Montana. 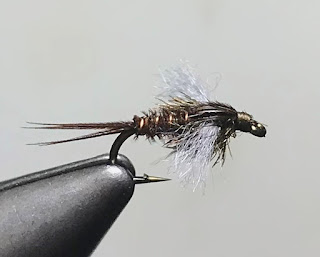 Here's the Iris Caddis, which as you may know is one of my very favorite patterns.  It was introduced to me that first year I went to Montana by Don, and like many of you, it took a few years for me to recognize its full potential.  I tied the thorax with touch-dubbed hare's mask, but the original is tied with the hare's mask just dubbed on the thread.  I like the touch-dub method because it give the fly a buggier look and the wax helps improve the way the fly floats without the use of floatant. 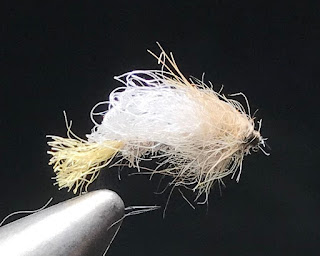 Here's a Pale Morning Dun snowshoe rabbit dry.  The body here is dubbed with a mixture of yellow and light olive beaver fur mixed 50/50.  The lighting in the photo makes it appear bright yellow/olive, but its really a paler yellow/olive.  I like beaver because its a natural fur that holds its color very well even when wet. 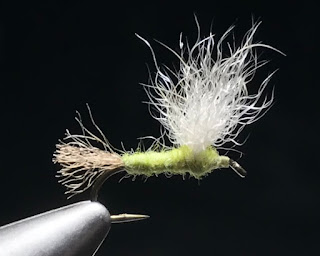 Here's a PMD sparkle dun side and front view.  Make sure you are using a high quality deer comparadun hair for the wing - short black intact tips like you see in the front view. If the hair tips are broken or long, don't use it, it is likely dried out and brittle or won't float very well. 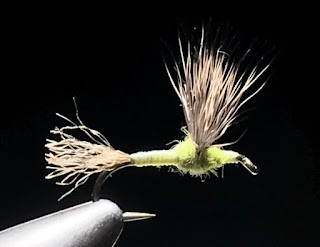 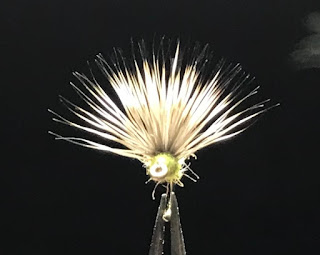 Here's a fairly good photo of the colors I mix for the PMD dun for reference. 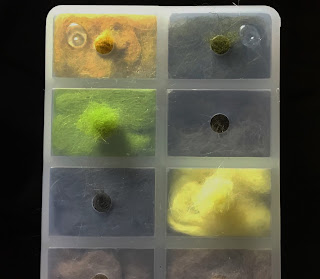