Autumn on the Water

We've managed to get out on the water a few times in the last couple of weeks with mixed results thanks to the frequent rains and resulting changeable water levels and clarity.  We fished a small creek in Pennsylvania and managed a bunch of small wild browns in a few hours of fishing.  The river was up but clear, and a good drift with deep nymph was the ticket.  Like a lot of PA waters, the top fly was a plain old Walt's worm.  I also took a few on Galloup's Improved BWO nymph.  This little nymph has become a fairly consistent fish producer for me everywhere I fish it. 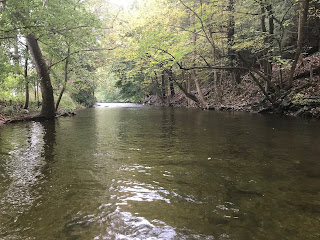 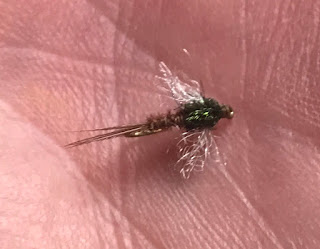 Locally, the South Branch of the Raritan River has fished well.  The water levels have been as good as we've seen this time of the year, in many years.  Most of the fish we've taken have come on Iris caddis fished deep, Walt's worms, Vinnie's Isonychia nymph and black woolly buggers.  The majority of fish have been rainbows in the 12-14 inch range, with a few smaller wild browns.

Yesterday when I arrived at the river mid-afternoon a steady light breeze carried the distinct odors of Autumn - drying corn fields, wood fires, and decaying plant matter along the stream bank.  There were quite a few dot-winged caddis in the air.  These are Autumn's most reliable hatch caddis in these parts; its a medium sized, tannish-brown clumsy flier that on breezy, windy days like yesterday often gets blown on to the water surface where eager trout will grab them confidently.  The river was at a perfect level and clear.  I tied on a 30 inch section of 5X tippet to the end of my leader and then knotted a size #16 tannish-brown caribou caddis to the end of it.

I fishing a fast riffle where two currents joined below an island and spread out over a rocky bottom. The far bank has a mature maple tree about halfway down the riffle whose lower branches reach out over the broken water leaving about 5 feet of shaded space.  Beginning at the top of the riffle I cast my fly randomly onto the riffle and follow its path with my rod tip, mending my line as needed to get a long, drag-free drift.  Sure enough after a few drifts a wild brown of about 8 inches grabbed my quickly moving fly and shortly thereafter I netted it. 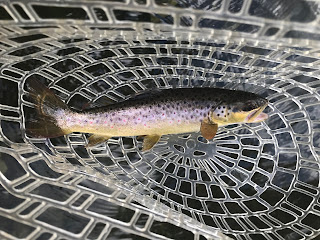 South Branch of the Raritan River wild brown trout.
Depending on who you ask you will get a different answer from each person as to what flies are most productive in the fall. My first answer is, use the flies you have the most confidence in.  If you often do well fishing a beadhead pheasant tail nymph with a smaller zebra off the bend as a dropper, fish that.  If you have confidence in a hare's ear nymph or a prince nymph, fish that.  For me, if nothing is rising, in the autumn months I tie on a pheasant tail nymph, Vinnie's isonychia nymph, Walt's worm, iris caddis or lately Galloup's Improved BWO nymph.  In fast pocket water or deep runs, I also like to fish a serendipity or $3 dip.  I rarely fish more than one fly, preferring to fish just one with focus.  If those flies fail me, I tie on a black wooly bugger, which usually will at least get fish to chase it.
If you see fish rising, your choices should be fairly straightforward.  Most of the caddis you will see are tannish-brown and sizes #16-18, although early in the am I fish a size #10 or 12 October caddis imitation right along the banks where these large caddis hatch just before daybreak.  Often in the mid-afternoon blue-winged olives will hatch, they are generally small, sizes 20-22, and quite dark.  Slate drakes are still showing, too, but that hatch is waning here in NJ.  And don't forget midges; they may show on any given day and in any weather.  I fish my Matt's Gnat or Simple Snowshoe Emerger for these diminutive two-winged insects.
Bottom line - if you have even an hour, get out and fish, the rivers are in great shape, there are few anglers about, and its great for the soul.
Sharpen your hooks.
Posted by Matt Grobert at 8:09 PM

Great report from your neck of the woods. Matt the fishing has been super and the reason has been the conditions of our streams in the east. The trout seem to be so aggressive and really "whack" the fly.

Brk Trt - Thanks, and the fishing has been terrific!