Last Thursday I grabbed an hour on the stream after work and managed to hit the tail end of the hendrickson hatch that day.   When I got to the river in the late afternoon there were just enough of the mayflies hatching to keep a few trout feeding in the run I chose to fish.  The air was cool, and the breeze kept it that way on my face despite the bright sun.  The water was crystal clear and 50F on the nose.  Some little black stoneflies came and went, and early smokey-winged sedges were everywhere but on the water surface.

With only a few fish rising steadily, I quickly tied on about 3 feet of  fresh 5X tippet to the end of my leader and to the end of that, a size #12 Catskill style hendrickson.  I then picked the first fish I saw rising at the lower end of the pool.  It was holding just below the surface in a wrinkle just below a submerged boulder where it could just tip its nose up and sip in each freshly hatched mayfly in its path that didn't get off the water quickly enough.  Fishing from below the working fish I dropped my fly just above where the boulder sat.  The bumpy current pushed and bobbed the fly as it floated over the rock and the first few drifts went unmolested.

After a few minutes I changed position and moved up to a point where I was across from and just above the rising fish.  I hoped that I could drop the fly above the rock with a reach cast and feed to the fly down to the target and mend my line as needed to get a good drift.  My second cast landed just as I had wanted it to, with the fly first followed by tippet, leader and line.  Sure enough, just as the fly passed the rock and entered the chop the fish eased up and sipped in the fly.  After a brief battle, I brought a nice brown to net. 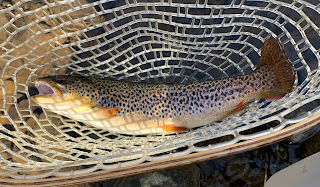 And that was it.  I watched and scanned the water but in the short time I worked that fish, the others stopped rising and the hendricksons all but disappeared.  The early smokey-winged sedges still filled the air but again stayed off the water.  I also saw a few little black stoneflies skitter along the water, but nothing chased them.  I walked up the stream a ways to check out other runs, but they were also void of working fish.  I stuck around for a bit enjoying the solitude and hoping for a stray rising fish  but to no avail. That's fishing.

The early smokey-winged sedges (Apatania sp.) are very abundant this year in the South Branch, their mineral cases lining the rocks in the calmer sections of pools where they pupate and hatch.   Apatania sp.  The ones I saw must have hatched earlier in the day and were just flitting around enjoying the sunset by the time I arrived.  I recommend that if you do get out to fish the South Branch in the next week or so, be sure to have some size #16-18 dark caddis imitations so you're ready in the event you catch the hatch. 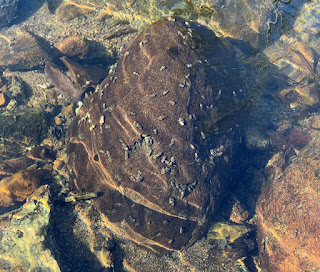 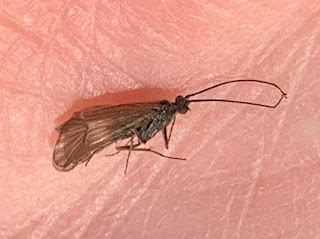 Early smokey-winged sedge. Note that the body is about a size 20, and the wings are about 2X that. I tie them on an 18 and make the body short on the hook and the wings extending past the bend a bit.

Sharpen your hooks and be safe out there.
Posted by Matt Grobert at 7:00 AM