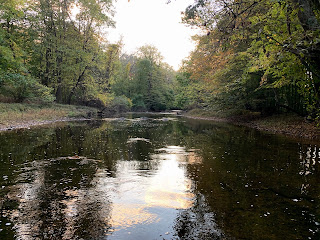 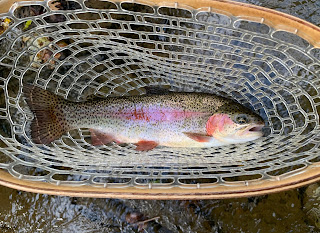 It has been four months without fishing in NJ - this was the longest period in over 40 years that I did not fish local waters.  And in that period I only fished a handful of times in PA and NY.  I tied a lot of flies though, and while tying I do fish in my head.
We are in need of some serious rain though, as you can see by the photo above, the streams are low and clear with reduced flows.
Sharpen your hooks.
Posted by Matt Grobert at 10:05 AM

1. What a precise and succinct way to describe the recent rises: "random, inconsistent rises".
2. The photo looks like the "Mink Run"?
3. On 10/22/20, the temp. was 58-72 deg.F. Wind was at 1 mph NNE. Water flow = 42 cfs and clear.
4. I believe trout were sipping #32 midge pupa "in" the film and occasionally chasing after ovipositing small dot-winged caddis - occasional rise rings with air bubble.

Q: I know many pronounce your name "Grobert". I wonder whether it could be "Gro-Bear"?

P.S. Glad to read that your family health issue has been resolved.
P.P.S. Out of 147 fly fishing books, the"Fly Fishing New Jersey Streams" is one of few books I have read more times than I can count. Thank you.