A Tale of Three Rivers

This past weekend we managed to fish quite a bit despite working both Friday and Saturday morning. The fishing was very good, the catching somewhere between poor to excellent depending on the location and the day. The weather all three days was weird, yes weird, at least for late April, but not bad.  Seems a low pressure system hanging to the north kept the breezes strong and the air temperatures fairly cool, and the skies about 51:49 - clouds to sun.  If you looked up at the sky and watched the flow, the clouds were riding the upper winds like they couldn't wait to get out over the Atlantic Ocean.

On Friday afternoon, I hit the South Branch mid afternoon, and to my surprise there was no one on the water where I went and the hendricksons were hatching in very good numbers, and best of all the trout were taking them off the surface.  I waded into the top of the pool, tied on a #12 soft hackle pheasant tail emerger to the end of my 5X tippet, and before long was fast to a nice rainbow. I fished for about 4 hours and had the river all to myself.  And the bugs and the trout cooperated.  I caught a ridiculous number of trout, all rainbows, and all of them on two flies - the same pattern, only the first fly literally was torn apart to the point it was almost a bare hook so I retired it and tied on a new one.

On Saturday, I headed to Broadhead Creek in PA after a morning meeting nearby.  I got to the river about noon, and it was in great condition - clear, a little high and essentially perfect for this time of the year.  A good breeze blew, it was cool, and everything felt good.  Only there were no bugs, and after two hours of nymphing to no avail, I decided to head back to Jersey.  I think I was a week or so too early.  Doesn't the creek look great though? 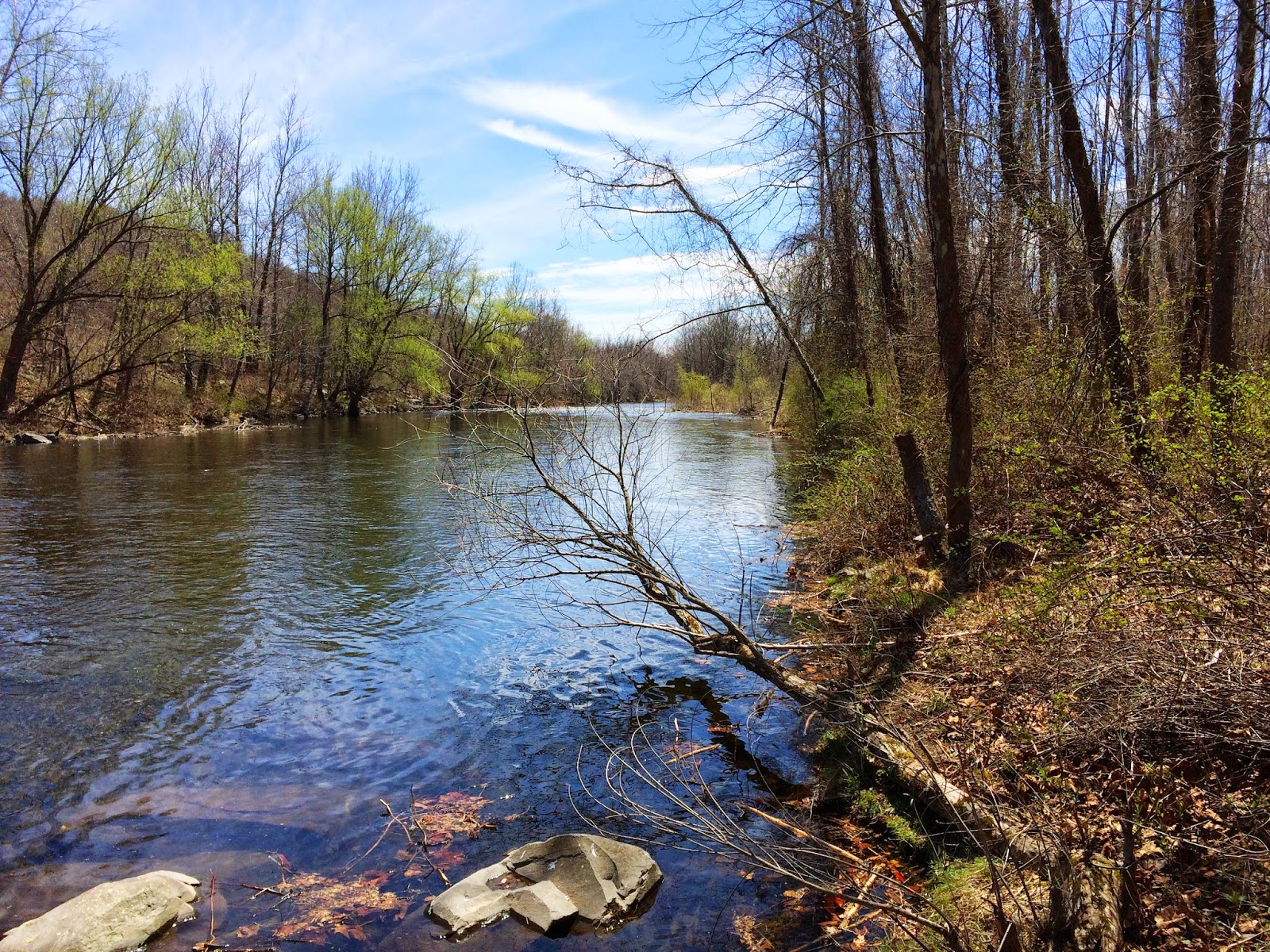 My next stop was the South Branch, where I found lots of anglers, plenty of bugs and trout rising to them.  I went to a spot that was off the beaten path and fished for a bit, caught a couple and then spent the next hour or so checking out different spots on the river to see what was happening before calling it a day.

Sunday I met up with a couple of friends on the Musconetcong River, and we had a blast.  There were no fish rising when we got to the water despite a very heavy hatch of dark grannoms, so we went deep with sparkle emergers and crane fly larva, and did quite well. 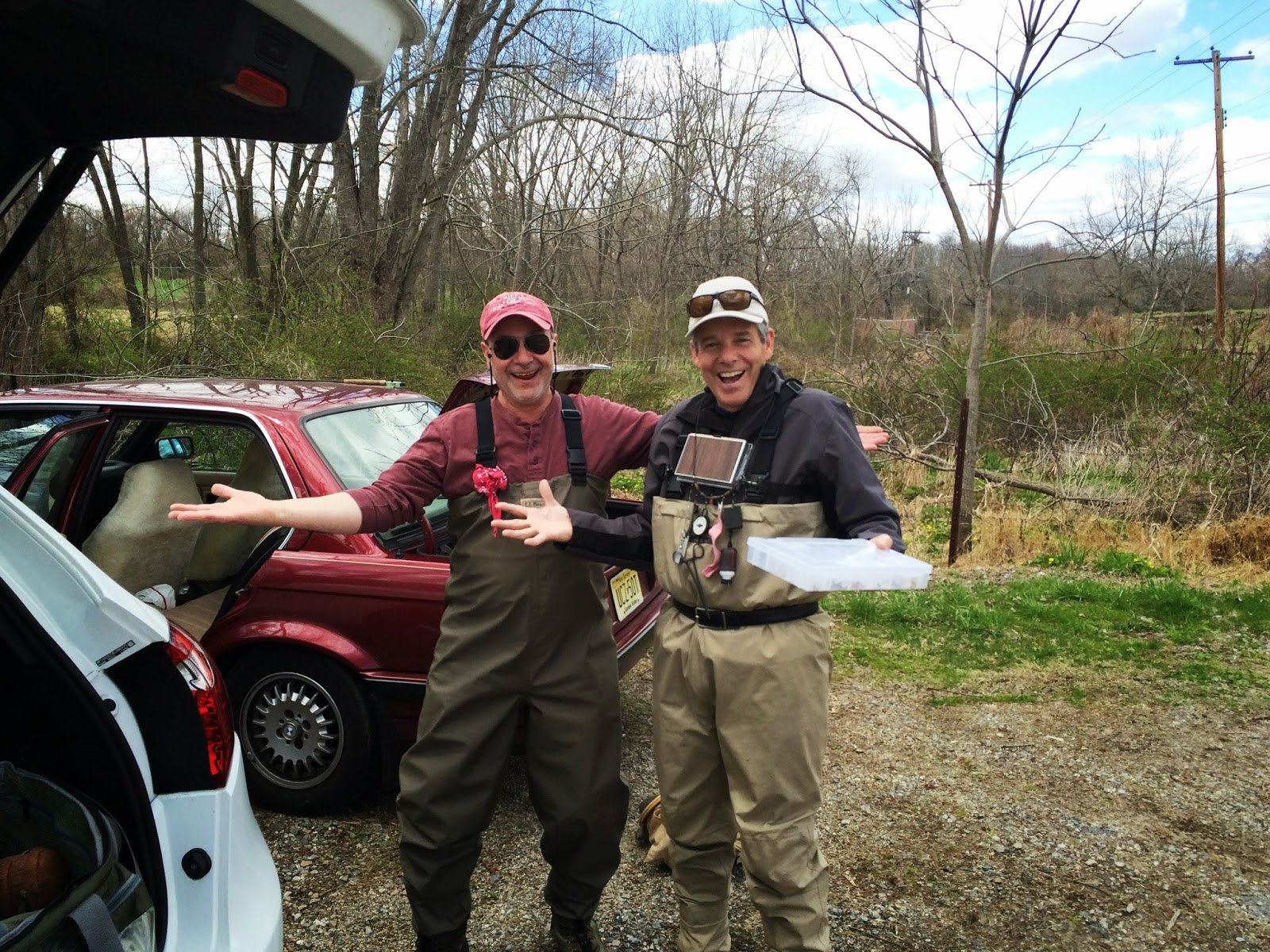 My friend David lent me his Winston classic fly reel to fish, and so I did. It balanced perfectly with my 10 foot, 3 weight rod.  It was a pleasure to fish with.  Here it is in a bed of what I call swamp daisies.  Did you know that these bright flowers react to the sun by closing up when the big yellow orb goes behind the clouds?  I didn't know this until Sunday when I sat down in a patch of them to watch Paul fish, and I noticed that every time the sun went behind the clouds for more than 30 seconds or so, the flowers would close up.  Then the sun would emerge, and they would respond by opening up just as you see here in the photo. 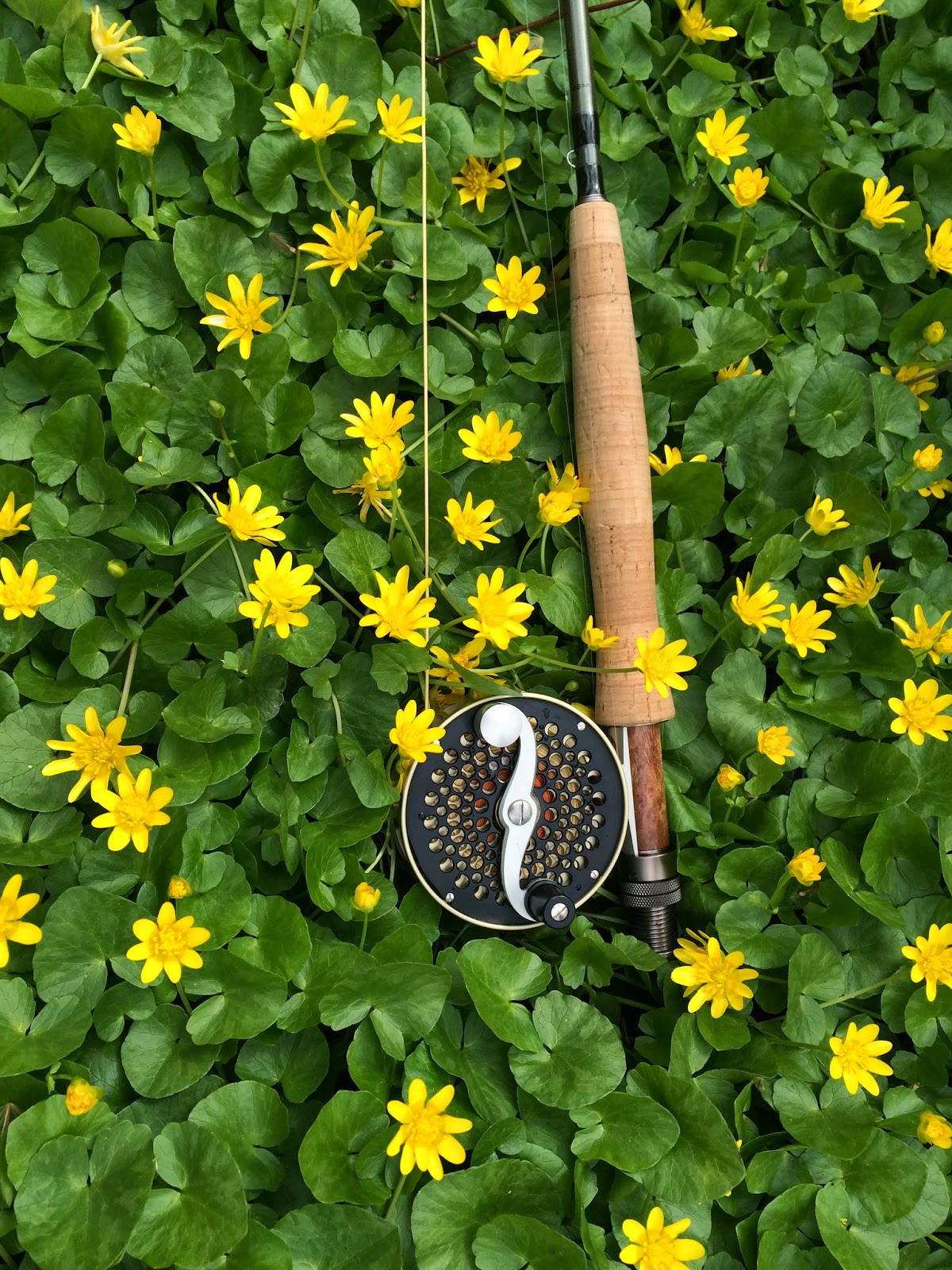 After fishing for some time, Vinnie decided to seine the river and see what he could stir up in the rocks.  Here's a nice, big crayfish. This is a Rhyacophila Sp. caddis larva, better known as a rock worm.  It is a free-living caddis that is very abundant in most Eastern rivers, and that was evident on Sunday as every sample had a bunch in it. 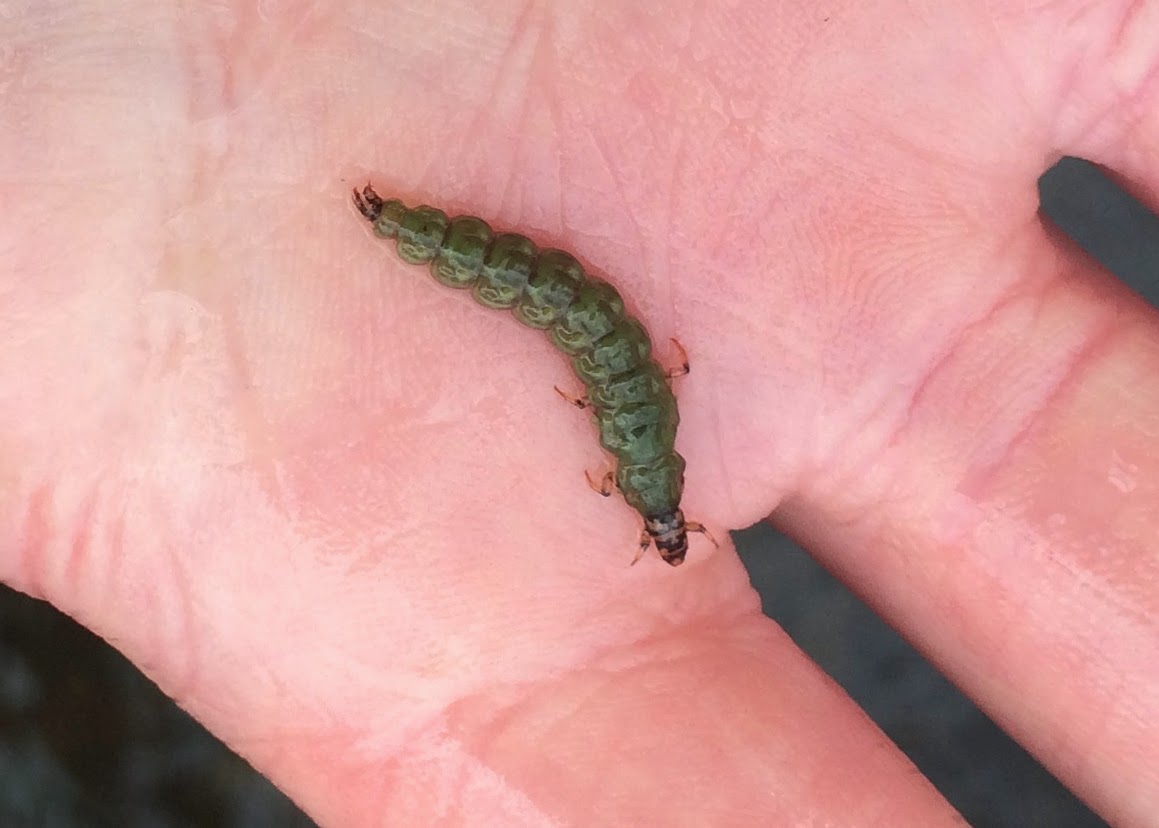 And here we have a giant brown stonefly nymph crawling over the back of my hand.  These big fellas prefer clean, fast moving water and cobble bottoms.  They crawl around the rocks for up to two years before they hatch into a slender, down-winged adult whose flight resembles what one might think a drunk helicopter might look like.....use your imagination. 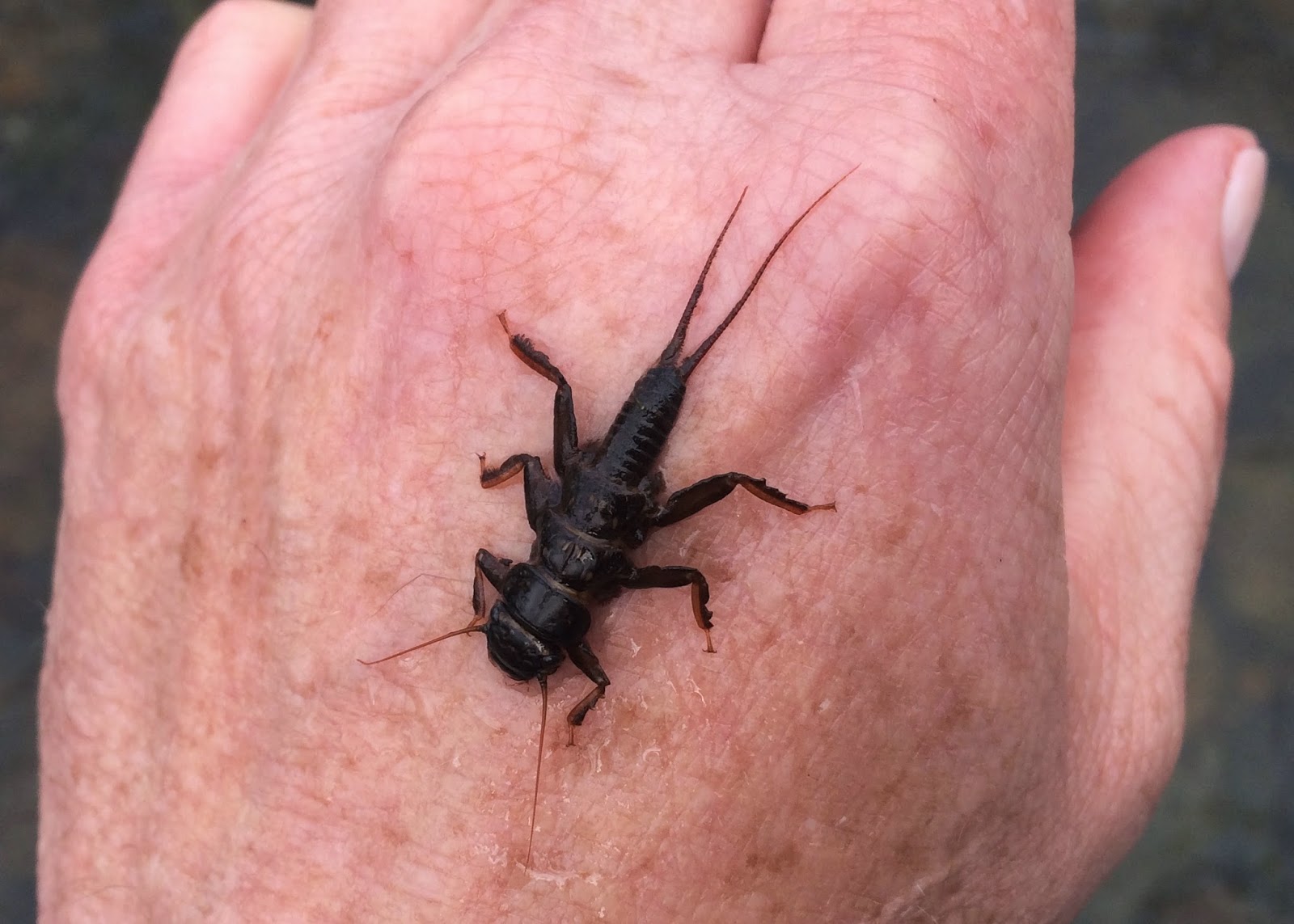 And finally, we have an egg laden female hendrickson spinner.  When dusk settles in after a good hendrickson hatch, these beauties return to the river to mate and drop the next generation into the drink where they will hatch into a tiny nymph, grow over the next twelve months, and then hatch again into a winged terrestrial adult to start the process all over again. 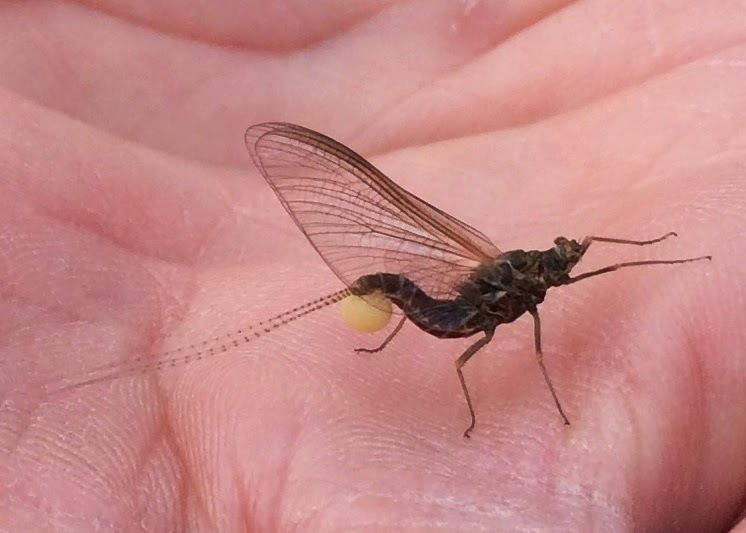 I hope you all enjoy this stuff as much as I do.  The fishing is great, and it's even better when you look around, open your ears, and see and hear everything else that's tethered to the world around you.

Sharpen your hooks!
Posted by Matt Grobert at 10:35 PM

The classic reel is OK, but what's the classic car. Love it.

Amen Brother ! You're ethic is the best. True credit to our ranks!