A Quiet Summer Evening On the Water 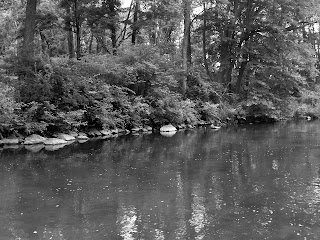 A couple of days ago my son Matt and I fished the South Branch late in the day.  He calls me most every day to see if we can fish, but lately it has been hit or miss with either night meetings, or the water temperatures are too high for the trout. It had rained the night before and that day the skies were mostly cloudy with moderate air temps, so we were in luck.  The water was 66 degrees F when we arrived, a little off color with a decent flow.  I didn't see another angler as I drove along to river to our meeting spot, so we had our pick of where we wanted to fish. 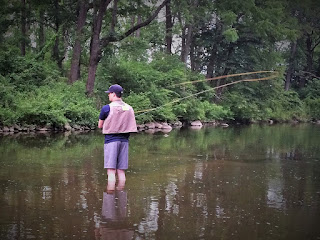 After gearing up we carefully waded into the long pool as cardinals and other song birds watched and sang from the walnut trees scattered along the opposite bank of the river.  A few light colored caddis fluttered about along with some midges and the odd cranefly, and fish moved in the darker, deeper runs and pockets as they took insects in the water column and just below the surface; the flash of their flanks revealing their locations.

We both tied on an Iris Caddis and spread out to give each other plenty of room.  We each settled into positions within casting distance of active fish, and planted our feet so as not to disturb the water any more than necessary. It was a wonderful night to be on the water; the air was calm and warm and enough fish rose to keep us both occupied.  And the fishing was good.  We caught only rainbows, although Matt had a nice brown working on and off near him most of the evening, but it was having none of what he offered.   Every fish came on the Iris Caddis. Here's my fly at the end of the night.  I love it when I tie on a fly and fish it the whole outing and it works like a charm. 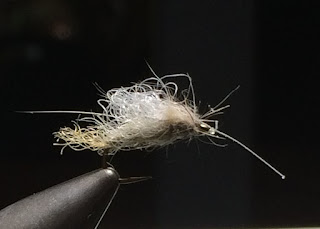 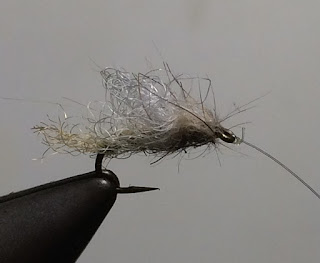 If you don't carry Iris Caddis in the summer months, you are likely missing out on some great fishing. This fly imitates the light colored caddis that emerge to some degree just about every single evening on trout streams across America.  Notice the bottom photo; the hook point is blunted, and when I checked it as darkness took over the light, I knew it was tie to hang this one up and quit for the night. If it were earlier in the day, I would have sharpened that puppy up and kept fishing it. We had another great night on the river, and hopefully this week the expected rains will give us some more summer nights like this one.