An Evening on the Beaverkill River 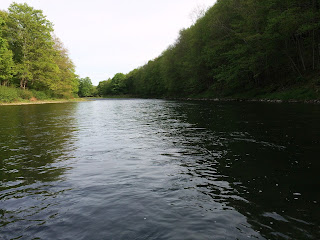 On Friday I had meetings in Scranton, PA, so I packed an overnight bag and my fishing gear into the car before I headed out in the morning in order to end the day fishing in the Catskills.  I got to the cabin in Roscoe in the late afternoon, and then quickly headed to the river.  As I drove down along the river, I could see that many folks had the same idea as I did; all of the popular spots had anglers lined up in them.  The lot at Barnhart's was full with about 7 or 8 cars, Hendrickson's pool had a few guys, Cairns of course had a small legion of folks fishing it, and so on down the river.  I went to spot I thought might have a few anglers, but much to my surprise and delight, it was void of fishermen.

The weather and water were perfect.  Thin high clouds muted the sun and the breeze was negligible.   The air was in the low 60's F, and thick with humidity.   The river was at a good level, clear, and in the low 50's.  A fair number of caddis were mingling about above the water, and March Browns hatched sporadically.   The caddis were a mix of early ginger caddis, shad caddis, and smaller grannoms.  A fair number of #16 rusty spinners also dotted the water surface, likely of the Blue-winged Olive species that hatch in the mid to late mornings this time of the year.   As I rigged up my rod on the riverbank, I scanned the currents that skirted the  half-exposed rocks along the far bank, and noted a few rising fish in the seams and eddies.

I waded out past the halfway point and watched the couple of fish rising for a few moments.  One was rising aggressively, likely to caddis, and the other two were sipping in their meal, likely spinners or spent caddis.  I decided to move up to work the one rising just above an exposed rock with regularity.  This was the one I thought was working caddis that were either emerging or trapped on the surface.  I tied on a tan bodied caribou caddis, size #16, and after making a couple test casts, I focused on the target.   After landing a few casts above the target that created drag almost immediately, I realized I needed to get closer and above the target, so I could lay down a parachute cast and let the current bring the fly into the fish's feeding zone from above.

Once I was in position, I dropped my fly about three above the working fish, only to have the fly move in a circle before it got to where the fish was rising.  Multiple current played havoc with my fly and line, which meant I had to drop the fly only a few inches above the fish in order to get a good drift.  It also meant the fish had to react in a nanosecond in deciding if it wanted my offering.  It was the only option.  So I false cast for a bit to feel the rhythm of the rod and line as it laid out in front of me in the air.  Once I was comfortable, I stopped my forward cast as the fly moved past the target, and it bounced back with slack  in the leader while the fly landed only 6 inches or so above where the fish had been rising.   The fly moved a few inches and then a golden shape moved rapidly from below and grabbed the fly like it was just another caddis drifting by.  After a brief but spirited fight, I reached out with my net and landed a nice brown of about 14 inches. 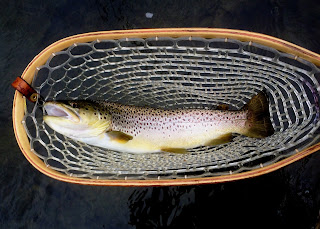 I had been so focused on the fish I didn't realize until I'd released it that several anglers had joined me down river.  So I moved up a ways to work a few fish that were working near the bank in a short run that had seams and eddies and soft water.  The surface currents were hard to read, and made the majority of my casts worthless well before the fly got near the fish.  I love a challenge, and worked hard over the next hour to get the right cast and drift.  The results were good, but not great, with three fish hooked and one of them landed.  The two that got off I had on for a bit before the hook come out.  I suspect they were not hooked well due to the fact that I had to have a lot of slack in my tippet to get a good drift, so the hook set was less than solid.  Who knows for sure?  I got them to take my fly, which is the whole point, but it would have been nice to land them.  All of the fish took the caribou caddis.

Sharpen your hooks.
Posted by Matt Grobert at 10:00 PM