Madison River - The Rest of the Trip

I know this has been a long time in coming, but its been that kind of summer this year - lots going on and very little time spent on the water.  The weather has been fairly warm and with so little rain in these parts the last two months, the rivers are very low and reaching temperatures too high for trout fishing just about every day.  So not only has there been little time to fish, but even when I have had time, conditions are such that I don't.  And fishing is what inspires me to write; so I'm in a writing drought.

We finished up our trip to Montana on the Madison River, and as expected, we wished we had more time to fish it.  The river was at a good level and clear, and the weather was great.   The first day we started out fishing, but I quickly switched to dries as I spotted fish rising along the quieter edges of the fast water I was fishing.  There were some caddis in the air, so I put on a caribou caddis and started taking fish on top.  In that fast water, the fish don't have much time to decide if a fly is real or not, so a good drift over a steady riser usually resulted in a take.  With the clear water, you could see the fish come up under the fly and as they opened up to take the fly, it was all I could do not to strike too soon. After spending the day fishing the riffles and pocket water above Reynolds Pass bridge, we went back to the cabin for a bite to eat before heading down river to water that in the past has been productive dry fly water in the evening.  When we got there we noticed the wind had picked up, rather than calming as it usually does in the evening here.  There were quite a few bugs in the air, and they too must have been put off by the wind, as most of them stayed up off the water and then disappeared as the light dwindled and the wind blew harder.  There were some bugs making it to the water, and when they did land, they were quickly gobbled up by trout.

There were some caddis, but they were out numbered by Epeorus spinners.  We took a couple of fish on the spinners by waiting for lulls in the wind and then making quick casts to where we saw the occasional rises.   Matt managed to get his first Madison River fish, a nice rainbow, by being patient and making short, compact casts to a fish working near the bank.  It was a tough evening after a good day and by the time we got off the water the wind was kicking up dust and whistling through our rod guides. 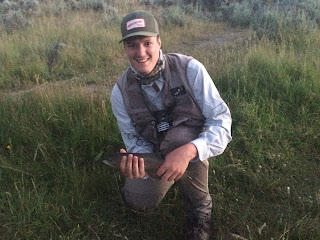 The next morning Matt and Paul drove down to the Henry's Fork to fish the wide, meandering currents that flow through the Harriman Ranch in Idaho.  Chris and I decided to stay on the Madison and first thing in the morning we hit the fast water above the Slide Inn.  We fished brown Serendipitys and Pheasant Tail nymphs and did well as long as we got our flies right down on the bottom where the fish hold.  In that fast, heavy water you hook a lot of fish when you find the right combination of fly and split shot on your leader, and you also loose a bunch as the fish are strong and know how to use the current to their advantage.  You don't wade this section of the river, not even just off the bank, its too dangerous and fortunately you don't have to - all of the fish are taken within ten feet of the bank or less, often only a foot or two off the edge. 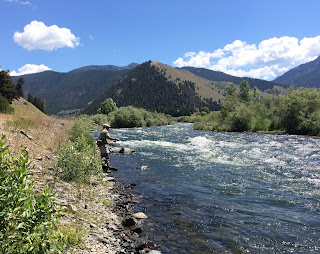 When the sun moved overhead, we called it quits and headed up the road to the Campfire Lodge to get some breakfast. While there we checked out the fly shop and I came across these cranefly larva flies.  These flies were tied on stainless steel hooks and are big and heavy, and not something I would fish in fresh water.  The guy there said they do work when fished in the fast water; but why not tie them on a hook that will corrode if a fish breaks off and the fly stays in its jaw?  I got a shoulder shrug for an answer. 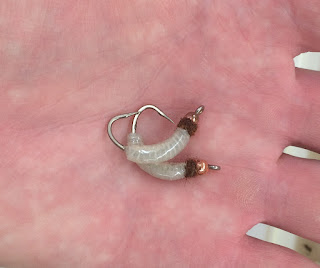 After that we fished a few different stretches of water and took a bunch more fish on dries before heading back to the cabin.  I had expected to fish nymphs, but even with the bright sun, caddis and Epeorus mayflies hatched sporadically bringing fish to the surface.  I took most of my fish on what I call a spent Puff Daddy, which is my variation on a dry fly that Doug showed me a couple of years ago.

It would be nice if I could tell you finished off the trip that evening with a bang, but it was more like a dud.  After the four of us had an early dinner at the Grizzly, we headed up river to fish.  The air was still, but very chilly, and no bugs showed at all.  We fished our dries over likely holding water and did take a couple of fish, but that was it.  Not that we were disappointed, we were tired and had a hell of a good week.  My son did well and now is already excited for our trip next year.  He's been tying flies almost every night, texting me or calling with questions, and his skills are improving rapidly.  Looks like he caught the bug like the rest of us.

Sharpen your hooks.
Posted by Matt Grobert at 10:31 PM

Have often heard the "hook will corrode story" but have never seen any proof that this will happen before the trout dies because of difficulty feeding. Do you know of any studies proving this "story"?

Not to answer for Mr. Grobert, but....I have caught a trout on a dry fly with a Rapala that has two treble hooks on it....so difficulty feeding? Not so much,I have also caught trout with jigs, flies with 10 feet of line on them and sinkers stuck in their mouths, they were feeding also.....Also I think we would see more hooks in mouths if the didn't rust out.