Phil M wrote us an email asking about our thoughts on why light colored nymph patterns are successful: 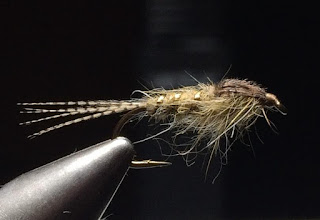 Here is an interesting question I would like your take on:

I grew up in New Jersey, moved to Illinois and will be moving back to New Jersey in the near future.

In looking at the major Eastern hatches (Sulphurs, Hendricksons, Slate Drakes, Cahills and BWO’s) most of these nymphs are either an olive, a brown, or an olive brown mix. That being said, anglers in New Jersey do very well using a light colored Hare’s Ear nymphs. Some March brown nymphs are a very light brown or cream mixture and I’ve see nymphs marked Sulphurs that are almost white or hendrickson nymphs tied with an orange hue. I am aware of the molting stage that make these nymphs lighter, but in the case of the species of mayflies I mentioned, shouldn’t 99% be an olive, a brown or some mixture therein?

If a majority of these natural nymphs are an olive, a brown or somewhere in between, than why do we see success with light colored mayfly nymphs?

What would be your preferred choice of nymphs for NJ?


My take is that I agree with Phil's take; the majority of mayfly nymphs are on the darker side, most are mottled with dark and medium dark colors primarily browns and olives, with some golden or amber shades mixed in the mottling.   Many of the lighter nymphs are burrowers - they dig down into the sand or silt, which naturally tends to be shades of light brown and tans.  The trout see these nymphs mostly when they ascend to the surface to hatch, otherwise they are burrowed in the sandy bottom out of sight.  When stonefly nymphs molt, they are white for a very brief period before their new carapace hardens and becomes mottled with pigment.

So why do trout readily take lighter nymphs?  I think for the same reason they take any fly - trout are opportunists.  They will grab anything that looks as though it may be food if it is drifting naturally and they are in a feeding mode.  I also think there are times when a trout takes a fly drifting by them simply as an intuitive, ancient reaction to "test" its authenticity, just as we know they grab small sticks or rise to a strike indicator.  Also, depending on the  color thread used and the dubbing blend, I have seen many light colored nymphs that darken quite a bit when they get wet. 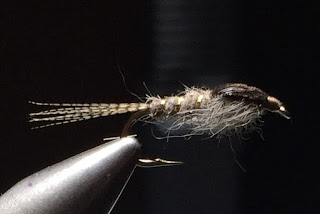 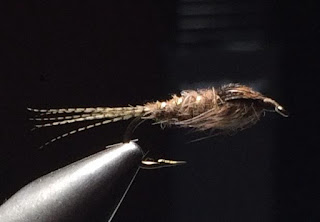 In the end, we really don't know for sure why trout take any of our flies no matter what color they are, except that in the absence of hands and fingers the only option they have to grab anything for any reason is to use their mouth.

It's the drift, not the nymph, unless they are selectively feeding during a hatch(even then, your power bait won't even work Matt :))....I have caught trout on caddis emergers fished on the swing in the middle of freezing winters while no caddis are emerging(and other nymphs)....I believe it is a food source to the hungry fish, they don't think about, they just react to what is placed before them....

I fish a lot of nymphs in the south central pa. Area.one of the things that I do is fish a dark colored nymph with a light colored nymph. I let the trout tell me what they want. I like to fish a small pheasant tail with a larger light colored hares ear,you never know what they want. The time of year also plays a big factor usually starting the season with darker colors and moving into lighter colors as the season warms up.