In this video I tie an Atlantic salmon fly known as the Rusty Rat.  The Rusty Rat is a classic hairwing salmon fly that was developed by Joseph Pulitzer II and Restigouche County, New Brunswick fly tyer Clovis Arseneault.  The original pattern actually had a black thread head, but sometime later the red thread head became the standard.  The pattern also become popular when tied using other colors of floss, thus in addition to the Rusty Rat, we now have Green Rats and Blue Rats. As usual, Tim did an awesome job producing the video.


Here's a Green Rat, which is also a popular color for Atlantic salmon.  I actually tie more of this color for clients than the Rusty Rat, as I am told it produces better overall for them. 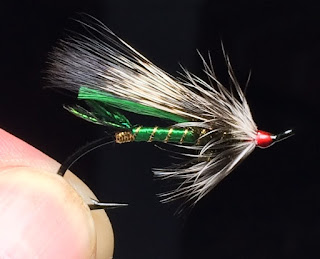 Sharpen your hooks!
Posted by Matt Grobert at 2:00 PM

Did your fingers melt using that light? Or did Tim do that part? :)

Ha! No, that's me. Bondic works great for salmon fly and salt water fly heads. One coat and done!