A Tale of Two Rods - The Long and Short of It

We managed to get out and fish the last four evenings on the South Branch, and for the most part the catching was very good.  The frequent rains and cooler than normal nights have the river in great condition.  The hatches have been as good as we have seen in the last few years.  Evenings we have seen sulphurs, light cahills, pink cahills, lemon cahills and their respective spinners.  Sunday during the rain, the little blue-winged olives hatched well, sizes #18-20.  Then there are the caddis; cinnamon or ginger caddis, dancing caddis, and the gray sedges are starting up. 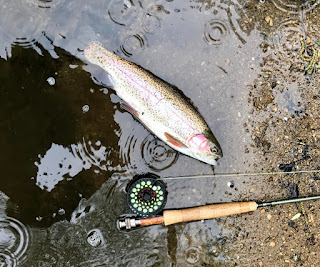 On Friday evening, the wind was up, so I broke out my favorite 5-weight; an eight and a half foot Winston Graphite II, 3-piece.  The rod is medium action at best and very pleasant to cast and fish, as it forces one to slow down and get into a relaxed casting rhythm.  This was the first time I have fished it since last spring, and it was awkward at first, to say the least.  You see, I have been fishing my 10 foot, 3-weight Hardy Zenith almost exclusively for the last year, even when I was in Montana.

The Winston is light, responsive, and is a pleasure to cast.  The problem was the length; I literally felt handicapped having given up a foot and a half of length.  The amount of line control the shorter length gave up was very apparent.  I immediately found that it was just not as easy to place a cast, mend line, or control the drift, like I could with the longer rod.  Maybe I was just used to the longer rod, which was possible. I slowly made adjustments with the shorter rod, and after a short while I managed fine.  But I still missed the advantages of fishing with a longer wand.  I don't think I'll be running out any time soon to get a 10 foot, 5-weight, but the thought does cross my mind. Maybe I'll have to borrow one from a friend first.

....and about that iris caddis pattern I've been telling you about.  On Sunday I fished it wet, as nothing was rising, even with all the bugs on the water, and caught quite a few fish on it.  Last night, I fished it as a dry/emerger, and took a bunch of nice fish on it, including a couple of pretty little wild browns. The bottom line is that this fly works, and I recommend you try it when caddis are present. 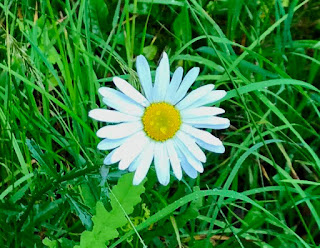 You could pawn that old Tom Morgan graphite II off on some sucker and buy
a new high end 10 footer... or not.

The iris caddis is the best fly going