On Saturday after tying at the Whitewater Flies open house event in Lafayette, NJ, my son Hunt and I headed up to the Catskills.  We landed at my friend Paul's house in Roscoe at 4:45 PM, and by 5:15, we had the drift boat and trailer hooked up to the car and the three of us were on our way to the upper main stem of the Delaware River. 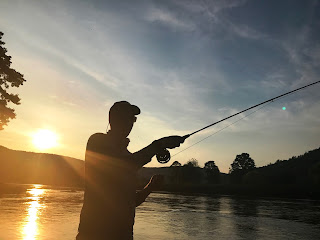 We floated from the Shehawken access on the West Branch of the Delaware River to Stockport, a short float, but filled with opportunities the whole way.   The air was humid and hot for this region, so we waded every chance we got so we could stay cool in our waders.  The water was cool, and clear, with every rock and stone on the bottom visible, which meant we were very visible to the fish. When we came upon rising fish, we got out of the boat and tossed our offerings from a distance, because if we got too close, they would go down in an instant.  By darkness, we had hooked a bunch of fish, and landed a few, including a nice 20" brown that took my size #20 blue-winged olive emerger just as the sun fell below the mountain tops. 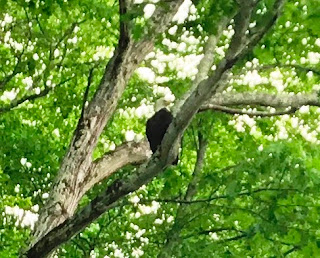 On Sunday morning, Hunt and I packed our gear and headed to Whitetail Country Fly Shop, to meet Joe Demalderis "Joe D", of Cross Current Outfitters.   Hunt had never been on a guided float trip,so it was a perfect way to spend Father's Day with my son.  We put in at the Shehawken access on the West Branch at just about noon.  Dark puffy clouds glided by overhead, alternately providing shade and hot sun.  We decided not to put on our waders, instead we would wet to keep cool.  We also had the benefit (not) of almost constant wind - it may have kept us cool, but it also made casting a dry fly almost impossible at times.  Joe had one hell of a hard time rowing the boat against the up river unrelenting gusts.

As we made our way downstream looking for rising fish, we realized we pretty much had the river to ourselves.   You could count on one hand the number of floating and wading anglers we saw in the first half mile of water, which usually has 3 to 4 times that many on this stretch on a weekend day. Perhaps it was because it was Father's Day, or because as hard as it was to cast from a boat, it was certainly harder to cast from a fixed position while wading.  On top of that there were no bugs on the water, or in the air, as you might expect.  Despite that, we hit every fishy looking spot (or tried to against the wind) within casting distance.  We had some refusals, and in one long riffle, my son managed to hook three fish blind casting to the edges of soft water below submerged rocks using a deer hair Isonychia emerger. Unfortunately, they were brief hook-ups.  Most likely because the wind kept a big bow in the line between the rod tip and water, making it very difficult to get a solid hook set.  As Hunt said afterwards, "I got them to take my fly, and that's what its all about".

Anyone that has fished the Upper Delaware and its branches knows that more often than not there is at least a breeze just about every day, many days with low, gusty winds  Its a rare day up there that it is calm.  A we worked our way down river, we came upon a large pod of shad milling in a large eddy below a truck-sized boulder in the middle of the river.  With no bugs and no trout rising, Hunt tied on a size #12 copper john nymph to 4X tippet, and cast it at a 45 degree angle downstream and across before feeding out line and letting it swing into the eddy.  As the fly made its way into the target area, he began to slowly strip line in.  The had would swipe at the fly and some managed to take it and get hooked.  He landed two decent sized shad before we decided to pull anchor and look for trout in the riffles below.

After we rounded the bend about a half mile below where the shad were piled up, we entered one of my favorite runs on the Delaware.  Here the river is a gentle riffle that is broken up by scattered boulders provide perfect trout holding water for about 500 yards.  We saw a lot of one-and-done rises that we did our best to put our flies over, with little success.  As we neared the bottom of the run, a trout rose along the right bank in the soft water below a rock.  Hunt quickly cast the Isonychia emerger  he traded for the copper john as we entered the run and it landed about 10 inches above the rise.  The fly drifted over the fish and it rose confidently sipping the fly in like a natural.  He set the hook and the fish bolted up river, his drag buzzing, for about 50 feet before turning and then coming right at the boat and then passing it (see photo above).   After a brief struggle, he eased the fish to the boat and Joe netted a nice wild brown trout.

After that, we continued down river without seeing another rise, and called it a day just as dusk was beginning to draw upon us.  Although the conditions were less than ideal, we had a great day on the water fishing, talking fishing, laughing and listening to Joe tell us stories and share his wisdom from thirty plus years of guiding and fishing this beautiful, big river.  And what better way to spend Father's Day than watching your son work the water with a shared passion and determination for fly fishing, and catching fish despite tough conditions?