On Thursday, after 4 straight days of crazy weather, the forecast called for heavy snow overnight and on Friday.  Steve had already left on that morning to go tree hunting in the mountains east of Livingston.   Steve's other passion is collecting bonsai trees; he's got a serious collection of many dozen trees, some worth more than most folks cars.  He goes up into the mountains where the tree line ends in search of 200-300 year old wind and weather stunted evergreen trees, most less than a foot tall.  Anyway, Thursday's weather was cold breezy and although we caught fish on the Madison that day, we decided to pack up and head to Bozeman after dinner rather than take a chance on the forecasted storm..

Friday morning Paul left for the airport to head home around 4:00AM. We got up much later and after a great breakfast at the Western Cafe and a stop at Montana Troutfitters Fly Shop, Chris and I headed into the mountains south of Bozeman to fish Hyalite Creek.  Having fished this little gem in the past, we knew it was full of wild rainbows and some brook trout, and we also were confident that the cloud cover and light showers would bring a good hatch of blue-winged olives.  Hyalite creek is small by western standards. Its crystal clear water flows through a beautiful, heavily forested deep canyon around rocks and boulders and over a gravel bottom.  We also hoped the canyon walls would keep the wind to a minimum. 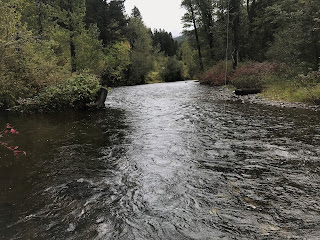 Sure enough when we got to the first spot fish were rising to blue-winged olives in the tail out of the pool and in the broken water at the head of the pool.  The olives were coming off in decent numbers and were about a size #20, so I tied an olive sparkle sparkle emerger to end of a new, 2-foot long piece of 6X tippet and cast to a rising fish just off the near bank above me.  The fly drifted a foot or so before it was taken by what turned out to be a 6 inch brook trout.  As the day turned to mid afternoon, the hatch increased and with it fish rose throughout the river for a couple of hours before the hatch subsided as quickly as it ramped up.  We caught mostly rainbows that averaged 6-8 inches long, but also landed a few that went 12 inches or so.  These fish are beautiful and fight hard for their size, especially on the 3-weight I was using that day. 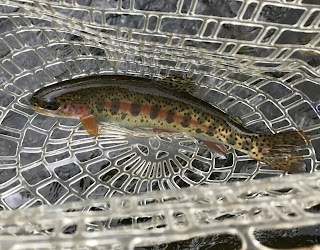 On Saturday, we decided to head up to the lower Madison River and fish it just below the lower end of Bear Trap Canyon.  It was cloudy with a light breeze and the temperature was in the low 40's. The river here is very different than the 50 mile riffle between Ennis and Quake Lake - it has a more consistent, flatter flow more like that of a tail water river.  The river bottom is covered with rocks and boulders that break up the flows and provide cover for the trout, but there is very little pocket water and riffles, which is is a challenge when reading the water.  There are plenty of trout in the river though.

When I first stepped into the river there were a few olives on the surface and as I watched the water surface a single trout rose just below a submerged rock.  I focused on the spot and the trout rose again. I had expected to fish nymphs when I rigged up at the car, so I quickly changed over to a couple of feet of 6X tippet and tied on a #20 blue-winged olive cloud emerger.  I then made a couple of test casts above me and when everything looked right on the water, I shifted my position and dropped the fly above the rising fish.  A nose poked through the water surface a few inches from my fly and took a natural.  I cast again, and after a short drift the fish sipped in my offering and after a short battle I landed a nice brown. 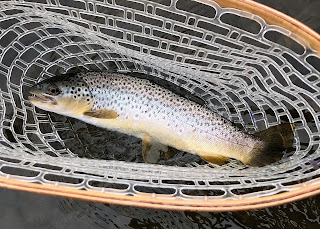 After that more olives began hatching bringing more trout to the surface to feed on them.  Over next few hours fish rose constantly all around me as the water was covered with olives hatching.  I took rainbows and browns that averaged 13-14 inches with some larger and others smaller.  It was the kind of fishing we dream about.  I switched flies between the cloud emerger and the olive sparkle emerger, only doing so when the fly I was fishing got so water-logged no amount of desiccant powder would restore it.  Here's a video of the trout rising all around me that afternoon.  The rises were subtle as you can see here and many belied the size of the trout that created them.


Eventually the hatch subsided as the sun descended to the west and the rising fish followed suit.  As I prepared to called it quits I heard the rich, high-pitched sound of an eagle far up on the mountain across the river for me.  There above a tight stand of pine trees along the highest ridge, a golden eagle circled, powered by the cool, steady breeze that rose up from the valley below.  I took that as a signal to be grateful for the week we spent in its home territory and I called it a day.  I can still see that eagle in my minds eye silhouetted against the diminishing sun light as it soared with a purpose only known to itself.

You did, sorry I got lost in reliving that afternoon on the lower Maddy. Folks, Chris fished up river of me on the lower Madison and enjoyed the same hatch, rising fish and catching.