We had early winter weather in September that Monday through Thursday of our trip.  When we woke on Monday, it was sunny but quite cold.   We went and got breakfast and planed our day.We decided that we would head over the Continental Divide at Raynold's Pass and fish the Henry's Fork in Idaho.  The Henry's Fork Angler in Island Park said it was cold over there, but the wind was calm and under cloudy skies.  They reported that blue-winged olives had been hatching the last few days along with mahogany duns "paraleps".   Of course, by the time we got there it was spitting and a steady breeze moved upriver, but olives were coming off and a few fish rose to take them in broken water.   Steve took a nice rainbow early on, but after that it was slim pickings - we did hook a couple before breaking them off in the thick weeds that cover the bottom of the river this time of the year.  Here's Paul in zeroing in on a riser. 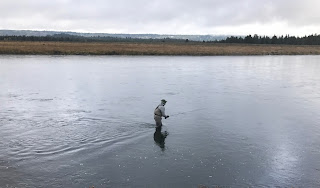 By mid afternoon the mist had turned to wet snow and the wind was became steady, enough to screw up your cast and push your tippet and fly off target.  We left to go back to the Madison, while Paul and Steve stuck it out.  This was the first day of a weather pattern that stuck around all week.  A low pressure system sat over the Northwest and an outer band picked up moisture and drove it in a Northeasterly direction dropping snow and/or rain (depending on the hour) right over the Henry's Fork and Madison Valley just north of there. 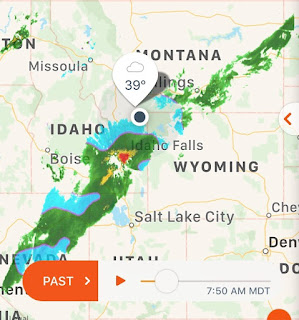 Tuesday we woke to heavy clouds, snow and freezing temperatures.  Here's the view from my room. 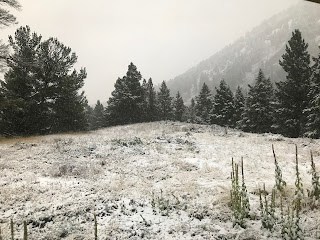 Again, we headed over to the Henry's Fork, where it was colder with a good breeze and thunder snow.  We put up with that for a while before the snow really came down then we blew out of there and went into West Yellowstone to visit the fly shops and grab some lunch.  When we got back to the Madison, it was still snowing but not too windy, and we caught a few before dark on olive sparkle duns.  The hatch was sparse, but the fish seemed to want to eat every one that floated over their space below.


And then there was Wednesday.  Not much to be said about hump day; we fished the Madison in bright sun and gale force winds.  It was tough, lots of shot on the leader, which more often than not, did no good.  My line, leader and flies spent more time flying like a flag off my rod tip than in the water.  Again, we caught a few fish, had fun despite the conditions and I even finished up the day taking a nice rainbow on a dry.

Thursday the wind was down some, but the rain and snow was back.  We caught some fish, but again we had to work for every one.  It was a tough few days, but we dressed right and made the most of it.  Evenings were always fun as once we ate, we sat around the table for hours tying flies, talking about the day, having a few beers, and busting each others chops relentlessly.