Another Easter to Remember

After Easter brunch this past Sunday, I headed to the South Branch to wet a line just as I have done on this holiday for many years.  Every time I fish on Easter I do it with my daughter Megan in mind.  You see, when she was ten years old, Vinnie and I took Megan fishing after Easter dinner to get both of us out of the house for a while so her younger brother and sister could nap.  We took her to a trout stocked pond in Sussex County and we had the whole place to ourselves.  That windless day in the fog and drizzle, while standing on the muddy bank of the pond, Megan caught seven good sized rainbow trout on a black woolley bugger.  I helped her cast the fly out and then she did the rest and giggled each time she hooked up. That afternoon and her big, dimpled smile is etched in my mind forever - I remember it as though it happened yesterday. 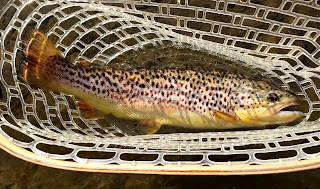 This year I went alone except for the black woolley bugger in my vest from that day some twenty plus years ago.  That fly, along with one my daughter Leigh tied, and a few my son Matt tied, go along with me on every fishing trip.  The day was mostly sunny, cool and breezy with brief periods of calm.  The river was clear, cold and at a nice level for the 1st of April.  I started out fishing nymphs and after about an hour or so without a hit, I decided to tie on a black woolly bugger and see if the past would repeat itself.

As the afternoon moved on I started to see some dark grannoms in the air and a few blue-winged olives. When the breeze stopped for a few moments, quite a few little black stonefly females fluttered down from the tree branches and did their clumsy dance on the water surface as they attempted to drop their eggs.  I watched the bugs as they mostly drifted along untouched except for an occasional slashing take that was never repeated in the same location.  That is until a fish began rising steadily directly across the pool from me.

I quickly removed the tippet and the bugger from my leader, added a couple of sections to it and a 2 foot length of 6X, and tied on a #14 gray X-caddis.  After a couple of test casts to make sure my leader, tippet and the fly where landing on the water as they should, I made a cast to the rising fish.  My fly landed a foot above but wind blew just as it landed and moved my leader and the fly dragged.  After the fly drifted past the target, I picked it up, made a couple of false casts and with a reach cast dropped the fly  above the fish just after it had rose again.  That fly never had a chance with that winter hungry trout; it went maybe 3 inches before the fish grabbed it and I set the hook.  After a brief tussle, I netted the pretty brown you see above.

As it often happens, more stoneflies began to drop to the water and lay eggs as the sun started to move lower in the sky and with that more fish started to chase them on the surface.  I left the X-caddis on and over the next hour or so I took two more fish, rainbows, by immediately dropping my fly and skittering it over the area where a rise had just occurred.  If you have never taken trout by skittering a fly, when the conditions are right, give it try, the takes are nothing short of an explosion on the fly.

could be a Shannon's stocked fish?

Beautiful fish, great memories. Looking forward to your next post.

Anon - likely, the state isn't stocking browns as far as I know. I don't think it's wild.