Sunday morning arrived like no other day we have had so far this year.  It was warm, the cloudless sky was deep blue, and the air had the unmistakable smell of fresh blooms and trees beginning to bud. Daffodils, tulips and forsythia were in full flower while robins, cardinals and other songbirds brought their chorus to the proceedings.  Even better, we met my son Matt and his girlfriend Kelly for brunch and spent a couple of hours catching up and hearing about his new life in Boston.  It was a wonderful time, too short, but they had a long drive home and he had to go to work at 2:00AM. 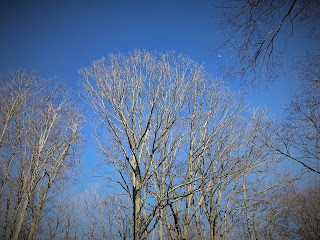 Fast forward to mid-afternoon Sunday.  When I got to the river around 3:00 PM, the sun was bright through a cloudless sky and a light breeze cooled the warm air.  The water was near perfect; clear with a strong spring flow, and in the low 50's F.   I was a little hyped up after seeing all those hendricksons the day before on the river, and the kid in me was enjoying every moment.  After rigging up my rod, I sat on the bank and watched the water for bugs and risers while I peeled and ate a clementine.  The river was quiet, but it was still early, and my expectations were high.

After a short while of watching and not seeing anything on the water, I tied a #12 soft hackle pheasant tail to the end of my 5X tippet and added some shot about 8" above the fly - this is my go-to  hendrickson emerger.  I waded out and began dead drifting the fly up and across before letting it swing below me in the current so it would rise to the surface as the line tightened.  After a few casts I stepped upstream some and cast above a seam on the far side of the river.  It took a few drifts to get the fly to drop into the pocket, but once I figured it out I took two stocked rainbows a few minutes apart.  One of the fish I thought was a koi at first, but it was this mutant instead. 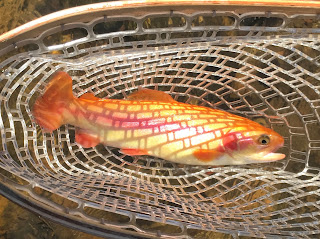 As the time passed I began to notice some hendricksons drifting my me as well as some dark grannoms in the air.  Nothing rose to the hendricksons despite what seemed to me to be perfect conditions.  The insects were riding the water surface for long periods before taking flight giving the trout plenty of time to rise up and sip the in.  I didn't see a single rise though in the first hour or so of fishing.

Experience has taught me that often when flies are the water and trout are not rising to them in one stretch, another stretch may have actively feeding fish.  So I climbed the bank and walked upstream through the brush and over dead falls to a couple of pools that I thought might have some action.  When I got to the edge of the water I stood and watched the water in the pool in front of me, and the lower end of the one above.  After a few minutes, a trout rose in the tail of the pool above where I was right where the water transitions into the pool I was standing next to.  A short count later it rose again, so I took the shot of my leader, checked my knot at the fly and made sure the hook point was sharp before slowly stepping up the bank to where I could get a good cast above the target. This fish was hungry.  My first cast landed about 2 feet above the fish and it didn't hesitate.  It moved to the fly and took it in a splashy rise, I lifted the rod, and was tight to what turned out to be a nice rainbow trout. 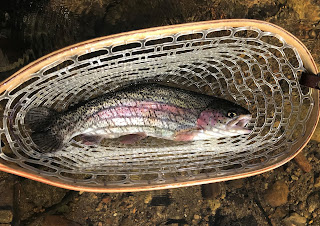 Over the next hour and a half hendricksons hatched sporadically and those that took their time getting off the water where summarily taken from below.  Although the hatch was waning, there were enough to elicit takes, thus I had enough targets to keep things interesting.  I took 6 more trout, all on the same soft hackle emerger fished in the film.  My leader was 12-13 feet long, with the tippet being about 3 feet of 5X, and even without wading over my ankles (which helps a lot on this river), none of my casts were over 30 feet or so. 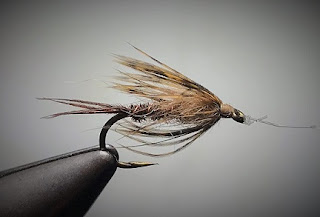 Did that mutant come from the SBR? or where you in Pennsylvania?