A Long Spring, But We're Back

Hi folks, hope you are still with us.  Sorry for the long break; a lot of life events have happened to us since my last post, some good and some just part of life's ups and downs.  Without going into details on most of the stuff, I will tell you that in May I had one of the happiest days of my life - my oldest daughter Megan got married.

All the rain we've had this spring and early summer put a damper on fishing as most of you know, and we haven't been fishing as much as we would like; this isn't a complaint, just a statement of fact, as the water levels have improved the overall health of the fisheries.   When the water levels have cooperated, the fishing has been very good.  In New Jersey and in the Catskills, we had some of the best hendrickson hatches we've seen in a bunch of years.  The fishing during the hatches varied - one day we saw lots of fish taking the adults, and on another day hardly any fish rose.  In fact, I was on the Beaverkill River one day and thousands of hendricksons covered the water and I saw exactly one fish rise.  I did mange to catch it, but that was it for roughly 2.5 hours of frustrating watching and wishing it would "happen".


The march brown and sulphur hatches were also very good.  We had a couple of great days on the upper Delaware river system fishing these hatches in early June.  The deer hair march brown emerger was again the answer when the big flies were coming off, and the snowshoe rabbit sulphur usual was the ticket when the smaller, yellow bugs were on the menu. 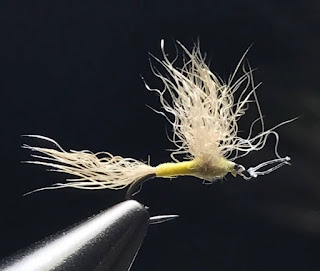 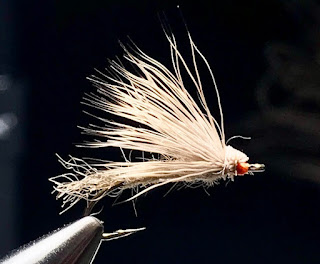 In recent weeks the slate drakes/isonychia have replaced the march browns and on the upper Delaware system rivers the sulphurs continue to hatch daily.  Last Friday we floated the West Branch with Stephen Sautner, author of "Fish On, Fish Off" and "A Cast in the Woods", with Captain Joe Demaldaris - Cross Current Guide Service - on the oars. The day was hot with bright sunshine, but the water was a cool 52 degress.  I wet waded despite the water temps and was actually pretty comfortable as long as I didn't go in too deep (up to my crotch, which I managed to do only once and it wasn't fun).  Hatches of isonychias and sulphurs pulsed throughout the day and the trout followed suit.  We took some nice fish and had a great day on the water. 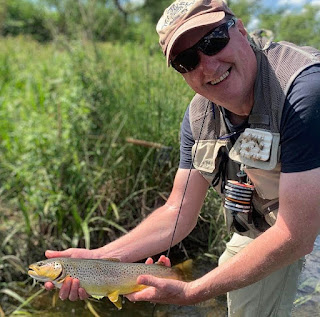 Yep, I do catch fish once in a while 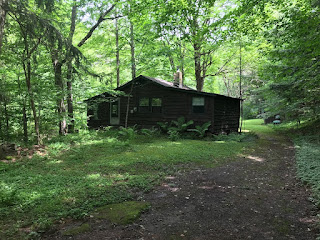 THE "Cast in the Woods" cabin

So we're back and I'll do my best to post regularly.  Hope you all had a good spring/early summer that was less eventful than that of mine.

Be kind and sharpen your hooks!
Posted by Matt Grobert at 10:00 PM

Glad youre back matt!

I'm happy to see you back in the fold. I can relate to life throwing curves.
You know that line you have at the bottom of your posts...sharpen those hooks...very important.