Montana - You Never Know What You Will Get

A week ago today we returned from an 9 day trip to southwest Montana.  We arrived on Saturday the 16th, and after leaving the Bozeman airport and stocking up on food for the week, we hit the highway out to the slide section of the Madison River.  As soon as we got to the mountains, the temperature dropped and the landscape turned white from snow fall earlier that day.  The Madison valley was beautiful and very winter like for September.  After a two hour drive, we reached the cabin far above Raynold's Pass bridge overlooking the Madison River at the base of the mountain where a massive rock slide occurred during the Hebgen Lake/Yellowstone Earthquake of August 1959. 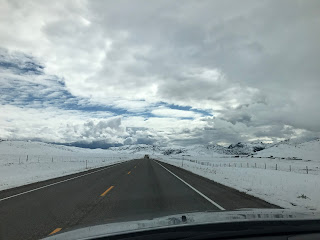 After unpacking and getting sort of settled in, a couple of the guys got geared up and headed down to the river below the cabin.  Chris and I drove down to fish a favorite section of fast water above Kelly Galloup's Slide Inn that is roughly across the river from the cabin.   At the end of what was a short time on the water, we all had caught a couple of fish.  We ate, then settled down to tie flies and talk about plans for the following day.

The next day we woke to bright sun and mostly clear skies, and a pretty steady breeze.  We made a quick trip to get breakfast between the lakes, and then after couple of stops to photograph the Madison between the lakes and the snow covered slide, we headed back to the cabin. 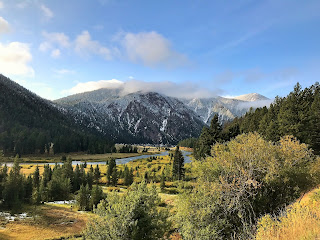 The Madison River between Hebgen Lake and Quake Lake. 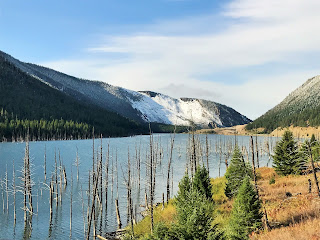 
That morning all of us fished the fast water, pockets, and long slicks that line the edges of the river,  below the cabin.  A couple of guys went with streamers, and I fished a dark brown #16 serendipity on a short line and did quite well.  All the fish were rainbows that fought hard before being released to fight another day. 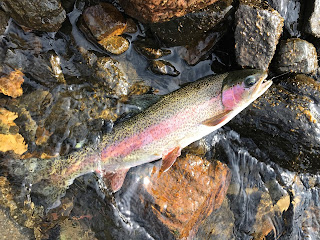 Later that afternoon, we decided to hit the water around Raynold's Pass bridge where the water, while still fast, flattens out enough behind many of the big boulders that we could nymph or fish dries in the event olives hatched.   About mid afternoon, high thin clouds moved over the sun and sure enough blue-winged olives began hatching in numbers, drawing the trout to the surface to feed.  The olives were varied in size, some as large as #18 and others as small as #26.  I chose a #20 improved sparkle dun, which I fished on the end of a 12 foot long leader tipped off with 5X tippet.  The rises were subtle and quick, barely breaking the surface of the fast moving water.

It took a good, accurate cast, with a drag-free drift to get a look or take. I made many casts onto the fast moving water that didn't hit the spot for every one that did.  With all the currents and slicks between myself and the fish I was constantly moving a little this way, a little that way, until I could find what I thought was the best drift for each fish.  It took lots of line mending and leader tweaking, which was great fun and exactly the kind challenge that takes me to another place and soothes the soul like few other things in life do.  I took as many fish that afternoon/evening as I did in the morning on nymphs, only this time I saw each and every one of my targets.

It was a great start to what turned out to be a tough week of fishing thanks to the fickle weather of Montana.  More to come, stay tuned.

And sharpen your hooks!

The weather didn't dampen my spirits, get it.:)

It's a small (BLOG) world. While you were fishing the Madison up stream on 9/17, PlanetTrout was fishing it around $3 Bridge. Both wrote interesting articles about the experience.